Fact: This planet has not harbored humans at 1.73 C or higher above baseline (i.e., the beginning of the industrial revolution). The number may be much lower. The jury is still out.

Fact: Humans are animals that depend on myriad other species for survival. As with all other animals, humans require clean air, potable water, healthy food, and the ability to maintain body temperature to sustain themselves.

Fact: Humans will die without a living planet that continuously supplies the elements listed above.

Fact: So far, all humans born into the physical realm have died. There is no rational basis for expecting any human to avoid this fate.

Fact: The Sixth Mass Extinction is under way.

Fact: All species have gone extinct or will go extinct. There is no rational basis for expecting Homo sapiens to avoid this fate.

Earth is officially at 0.85 C above baseline. The actual, unofficial global-average temperature is at least 0.1 C higher than the official figure. The ongoing El Niño will take Earth well beyond 1 C, the 1990 Rubicon from the Advisory Group on Greenhouse Gases. As David Spratt points out in this video from October 2014, 0.5 C was a more reasonable target. But those days are long behind us. 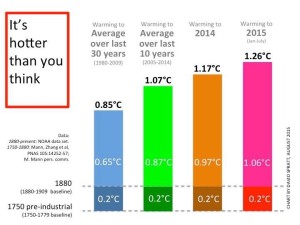 The rate of evolution via natural selection trails the rate of climate change by a factor of 10,000, according to a paper in the August 2013 issue of Ecology Letters. Clever as we are, we will not evade the ongoing Mass Extinction Event in the absence of myriad non-human organisms to supply the necessities of human life.

“Dramatic emission reductions (35%–80%) in anthropogenic aerosols and their precursors projected by Representative Concentration Pathway (RCP) 4.5 result in ~1 °C of additional warming,” according to an analysis published in the 20 May 2013 issue of Journal of Geophysical Research: Atmospheres. Instead of taking the cherry-picking, conservative approach assumed by academic scientists and the Intergovernmental Panel on Climate Change’s RCP, I will use the upper end of the conservative projection: Reducing industrial activity by 35% results in ~1 C global-average temperature rise, and eliminating global industrial activity results in an attendant ~3 C global-average temperature rise.

In other words, the absence of global dimming associated with reflective particles could cause an abrupt rise in global-average temperature beyond that which has supported the existence of humans in the past (about 4 C, the number at which this headline from 2008 in The Guardian conservatively concludes human extinction: “On a planet 4C hotter, all we can prepare for is extinction”). A large majority of the rise in temperature will come much more rapidly than the initial 0.85 C. Assuming the least-conservative end of the very conservative spectrum offered by the journal literature and the Intergovernmental Panel on Climate Change takes Earth well beyond the temperature at which human life has been harbored on this planet. Earth only gets hotter from there.

On the other hand, nobody knows the global-average temperature at which humans will become extinct. We have not yet completed this trial. By the time we complete the trial, there will be nobody left to record it. The lesson will come after the exam.

The industrial economies of the world are inextricably linked. If Europe goes down the tubes because the derivatives bubble pops on that continent, then there will be consequences throughout the world. There’s a reason the Federal Reserve System of the United States gives money directly to foreign countries.

The rapid rise in global-average temperature I have described in this scenario occurs within days after collapse is complete. Sans methane and its exponential rise in Earth’s atmosphere. Sans 10-year “lag” in maximum heating from atmospheric carbon dioxide. Sans nuclear facilities melting down catastrophically.

I am not suggesting all humans will die within days after the ongoing collapse of industrial civilization is complete. Rather, that process is likely to require months, or perhaps a few years. But it is difficult for me to envision Earth with humans in 2030, notwithstanding the IPCC’s fantasy technology.

Contrary to conventional “wisdom,” we cannot sustain this unsustainable set of living arrangements indefinitely. Industrial civilization will end. Those of you believing somebody has the system under control are deluded. Nobody is in charge of the system, despite the goals of the Deep State. The system teeters on the brink, even according to the International Monetary Fund and The Guardian (and see David Stockman’s overview from 22 December 2015 and this summary from 23 December 2015). With respect to the lifeblood of civilization, crude oil, and its home base: “Saudi Arabia is starting to come apart, and when its unscheduled rapid disassembly is a little farther along, the Industrial Age will come to an end.” Even the former head of the Dallas Fed admits there is no remaining ammunition to sustain the unsustainable monetary system.

Shortly after civilization reaches its overdue end, habitat for humans will disappear. Between now and then, every year will be worse than the one before, except for the few who benefit from oppression abroad, obedience at home, and destruction of the living planet. Obedience at home is exemplified by thoughtless people still on their hamster wheels.

Preppers take heart: Bunkers of beans will see you through a few years if you avoid fires, floods, superstorms, bitter cold, infectious diseases, and numerous other hazards. After that, it’s microbes and bacteria for ten million years or so, assuming humans become the first animals to persist beyond seven generations despite lethal mutations associated with bathing in ionizing radiation.

Everybody take heart: We get to live. It’s quite an amazing deal. Let’s get on with it.

McPherson and Pauline Schneider were interviewed for Evolve and Ascend on 7 July 2015. The description and embedded video were posted yesterday and can be found here.