Is terminating the industrial economy a moral act?

People often accuse me of inappropriate behavior because I propose bringing down the industrial economy. Interestingly, nobody seems too concerned about the morality of the big banks as they devise ways to profit from economic collapse (to be fair, some are advising their clients how to profit, too, from a collapse they foresee within two years). On the other hand, Australian politicians are trying to distance themselves from the one Aussie in their ranks who has a clue where we’re headed.

But back to me — my favorite subject, after all — and the accusations of inappropriate behavior I attract, like snakes to the eggs of ground-nesting birds. People will die, they cry, purposely and studiously ignoring the millions of people and other animals killed every day by the industrial economy. They act as if the industrial economy is propped up by a solid foundation of love and world peace. It’s all rainbows and butterflies, that good old industrial economy. A friend and neighbor, channeling Buddhism, claims she is taking right action by signing petitions to halt a dam on the nearby river and campaigning for Barack Obama. As if petitions or protests ever stopped anything the kings of industry wanted to construct. And don’t even get me started on Wall Street’s front man, the Trojan horse for big banks and the Pentagon, the prince of (Nobel) peace, the Liar-in-Chief whose war crimes surely match Henry Kissinger’s by now.

People accuse me of inappropriate behavior because, in this increasingly postmodern world, we don’t talk about right and wrong. Cultural sensitivities, you know. Not to mention cultural relativism. Call me insensitive — I’ve been called worse, and my skin is thick — but I claim there is right and wrong.

I’m way too postmodern to believe there’s absolute right and wrong. I gave up that brand of religion years ago. But on specific issues, in particular circumstances, there is damned little gray. Even in the relatively broad example of industrial culture, there is plenty of black and white.

The definition I’ll use is straight from my buddies Merriam and Webster. Moral: 1 a: of or relating to principles of right and wrong in behavior: ethical (moral judgments) b: expressing or teaching a conception of right behavior (a moral poem) c: conforming to a standard of right behavior d: sanctioned by or operative on one’s conscience or ethical judgment (a moral obligation) e: capable of right and wrong action (a moral agent)

There can be little doubt that a system that enslaves, tortures, and kills people is wrong. Industrial culture does all that with stunning efficiency. Big Energy poisons our water. Big Ag controls our seeds, hence our food. Big Pharm controls, through pharmaceuticals, the behavior of our children. Wall Street controls the flow of money. Big Ad controls the messages you receive every day. The criminally rich get richer through crime: that’s how America works. Through it all, we think we’re free.

In contrast to western civilization, I think a system is right — and even just — if it treats people alike and liberates them, thus giving them freedom to live unchained from the bonds of culture, politics, and a monetary system developed and implemented by others. I will not go down the road of oppression at the point of a gun or the blade of a bulldozer, but it’s easy to extend the notion of enslavement-torture-death to entire peoples and the landbase. It’s pretty clear I don’t need to go down that road: We’re so thoroughly disconnected from the land and from our neighbors that we no longer have a clue what happiness looks like, much less how we might bring some home.

What, about industrial culture, is wrong? Let’s start with the morality of war criminals such as Barack Obama at, for example, this week’s circus in Copenhagen. Obama is merely following in the footsteps of civilized people such as Thomas Jefferson and George W. Bush in fucking the living planet, and every non-industrial culture. In North America, we’ve been quashing terrorism in since 1492, and we just keep at it, pulverizing the planet while imprisoning and torturing anybody who gets in the way of civilization. We have a long and sordid history, and we keep doing it again, and again, and again. And, in exchange for a comfortably miserable life marked by an equal mix of unhappiness and i-Pods, we tolerate anything to which our hand-picked leaders subject us. This entire, life-draining, life-sucking enterprise requires us to tell increasingly absurd lies and convince ourselves they are the truth. Fortunately, this requires little effort on our part because we are awash in cognitive dissonance as we swim in an ocean of cultural denial.

It is relatively easy to make a moral case in favor of pulverizing the lands and waters myriad other species need to survive. We merely need to convince ourselves we’re not really part of nature. And, because of the aforementioned ocean, that’s not a problem. But then there’s the more difficult issue: the future of humanity. How do we justify the ongoing, ever-increasing destruction of the hanging-on-by-a-thread living planet, when we and future generations need the literal ocean to survive? How do we justify the murderous blob of economic growth in the name of baubles but at the cost of human life? Does that seem right? In destroying the living planet and all hope for future humans to occupy the planet, it hardly seems to me we are “expressing or teaching a conception of right behavior,” while “conforming to a standard of right behavior.”

Like the rest of us, scientists are eager to please the public, so they’re trying to make the dire medicine increasingly sweet by ratcheting up the dumbing down of the bad news. They’ve come up with a Dow Jones Index for climate change, because everybody knows and cares about the Dow, whereas nobody gives a damn about the living planet and our likely near-term extinction. 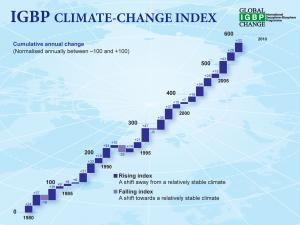 Graphs that please the eye notwithstanding, it’s probably too late to stop the frying of the planet unless we bring the industrial economy crashing to a very abrupt halt. Even conservative mainstream scientists admit that only complete collapse of the global industrial economy will save us from runaway greenhouse. Naturally, their paper was rejected by several journals — even the scientific community can’t handle this particular truth — before it was published last month in Climatic Change. We do not know how quickly we’ll need to terminate the industrial economy to save our species. If we did, we could spend that entire span arguing about the morality of bringing down the industrial machine of death. Since we don’t, we need to act as if the matter is urgent, which, as it turns out, nicely matches the data on the topic.

I am increasingly convinced that the only moral choice at all is to bring down the industrial as quickly as possible, and by any means necessary. If that means destroying property, think about the destruction of lives caused by industrial culture. If the means of halting industrial activity are violent, think about the violence and death caused by every civilized action. Using a cellular telephone is legal — and even encouraged by industrial culture — yet it kills women and children in the Congo. On the other hand, tearing down a cell-phone tower that kills thousands of birds every year and facilitates the death and torture of Congolese people is a criminal offense punishable by imprisonment. Because tearing down a cell-phone tower almost certainly represents an act of terrorism, it is punishable by suspension of habeas corpus, torture, and life in prison.

Short of violent and illegal acts, we have few options at our disposal. In fact, using all means at our disposal still leaves us a few thousand bricks shy of a full pallet. It appears even our most “outrageous” actions pale in comparison to the scale of the problem we face. The bankers are in charge, regardless of the immoral actions they take. The limited power we have is slipping away faster than justice in our courtrooms.

What does all this mean for us, the people with no voice? Does it leave us moral choices? Does it indicate how we ought to live, in a world gone horribly awry while we were ensconced in the freak show?

I have little to offer here, other than boring pragmatic advice about self reliance and introspection. We should be investing in our neighbors, as has always been true. And those neighbors aren’t just humans. They’re animals and plants, soil and water. We need to protect and honor them as we do our own children. We need to harbor them from the ravages of war, and also from an economy built on war. We need to live outside the industrial economy and within the real world of honest work, honest play, simple pleasures, and paying the consequences of our daily actions. We need to abandon a political system that takes without giving, long after it abandoned us. At the most fundamental level, we need to re-structure society so that children understand and value the origins of food, and life.

It’s no longer just the living planet we should be concerned about. It’s us. The moral question, then: What are you going to do about it?