Most people to whom I speak do not believe these definitions apply to us. Our species, they say, is way too clever to cause a crash in our own population.

As if the temporary access to inexpensive fossil fuels does not constitute the basis for human overshoot. As if we’re not already there, suspended like Wile E. Coyote. As if we’re not stealing resources from the future and, in the case of industrialized nations, from every other culture on Earth. As if we are not destroying, degrading, and desecrating the living planet that supports us all. 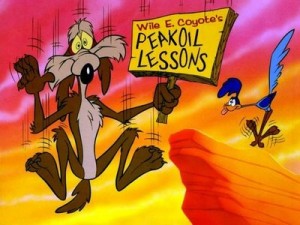 Look around. We are surrounded by cornucopians, and we’re drowning in cargoism. Delusion? Yeah, we’ve got that.

Ignore the delusions for a short time, and you’ll see we’re headed for a correction. At this late juncture in the industrial game, hoping for anything else requires a massive dose of wishful thinking.

Even a correction seems unlikely, unless by “correction” you mean “crash.”

Yet the overwhelming majority of people with whom I speak cannot wrap their minds around correction, let alone crash. Many of these folks are university faculty members. They’re supposed to be intelligent, although I’ve concluded that the average academic has below-average intellect. Many of them are ecologists, too, who have been learning about — and in many cases allegedly teaching about — limits to growth. We’ve known about limits to growth since at least 1798. Yet we’ve acted as if those limits do not apply to us. Indeed, we’ve acted as if a miracle will save us.

In the two million years of the human experience on planet Earth, we haven’t had a single miracle. Now we need two.

This entry is permalinked at Energy Bulletin, Counter Currents, Island Breath, and Speaking Truth to Power.