As I described in my prior post, water is a big deal for humans, as it is for all life on Earth. But food is pretty important, too. Currently, most Americans store large quantities of food in the form of body fat. The primary storage facility for unconsumed food is right down the street, in the nearest grocery store.

I think we’re nearing the end of the line for both classically American storage facilities, and that it’s time to start making the recently proverbial other arrangements. Even business leaders recognize the irrationality of not preparing for peak oil and its economic implications, but there are many other reasons for growing your own, including purging the high-fructose corn syrup and other industrial toxins from your grocery list. This post describes our systems for producing and processing food at the mud hut.

Perennial plants are much easier to work with than their annual cousins. After the perennials are established, there is no need to weed, and watering is a breeze. Fertilizer is still necessary, and woody plants need the occasional pruning. But in general, I prefer the lazy nature of perennial plants over the back-straining events of tending a garden.

The mud hut has gardens, not farms. After all, Eden was a garden, not a farm. The difference is primarily one of scale. We have no interest in developing an empire, although we’ll barter with neighbors.

Our perennial plants include about three dozen fruit and nut trees, including cherries, apples, pears, peaches, plums, apricots, nectarines, pluots, pecans, and Asian pears (i.e., Asian apples). We have a fig, a pomegranate, and several citrus trees. Trees are fertilized with humanure from the composting toilets I mentioned a few days ago.

Unprotected citrus will not survive the cold winters here, so we have four dwarf varieties growing in a greenhouse (lemon, lime, orange, grapefruit). The greenhouse is filled with 55-gallon drums brimming with water, which keeps nighttime temperatures about 25 F warmer inside than out. 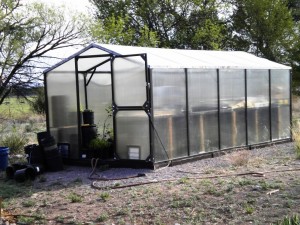 At two years of age, the citrus are already bursting out the greenhouse, so I am building a partially subterranean straw-bale greenhouse to ameliorate temperatures and give the citrus trees room to grow. It should also allow production of tomatoes year around. When the new greenhouse is finished, we will use the existing greenhouse to grow greens in the winter, start peppers and tomatoes in early spring, and dry various fruits and vegetables during the summer.

In addition to the trees, we have several varieties of fruiting shrubbery: raspberries, blackberries, table grapes, kiwis, blueberries, and native rose (for tea). Blueberries thrive in acidic soils, so we amended their beds heavily with compost made from pine trees. Non-shrubby perennials include asparagus, horseradish, artichokes, and rhubarb. All plants are protected from pocket gophers with hardware cloth. Roots of woody plants are protected by the three-foot cone of hardware cloth around the roots, and herbaceous perennials and all annual plants are planted into beds surrounded by a “basket” of hardware cloth, as I described early last year. 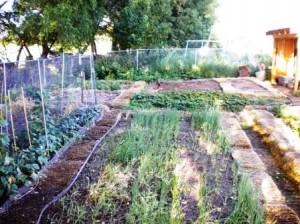 Because the honeybees of the world, and especially those in North America, are suffering from colony collapse disorder, we have our own bee box. We aren’t not particularly interested in their honey. We just want reliable pollinators. 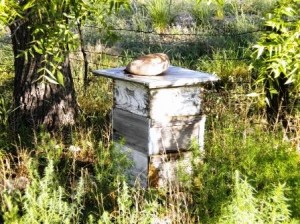 We have two cold frames (also known as hot boxes). They produce abundant greens during the winter, and we will use them for summer vegetables, too. I didn’t slant the roof enough to allow sufficient light, so I cut gaps in the front of the cold frames, covered the gaps with plexiglass, and added shiny insulation on the inside walls of the cold frames. And I was wise enough to leave a few bags of concrete mix outside during a rainstorm; these serve as counter-weights for the extremely heavy windows comprising the roofs of the cold frames (shown below without the new gaps in front or the insulation).

In addition to the gopher-proof beds, we have two large areas protected only from large animals such as javelina. We grow large quantities of potatoes in these areas and, starting this year, Valencia peanuts. We simply give up some of the plants to the greedy mouths of the omnipresent pocket gophers (last year we lost 3% of the potato plants). We will eat the goobers and feed the aboveground portion of the plants to the goats.

We have two adult females and a kid housed in a fully insulated shed. They spend their days lounging in a nice paddock, and they provide about a gallon of milk each day in addition to considerable entertainment. We drink the extremely high-fat milk, make yogurt, and we’ve been trying our hand at a few different kinds of cheese, so far including soft chevre, Colby, cheddar, Monterey Jack, and Parmesan. The aging process precludes grand proclamations of success, so far. 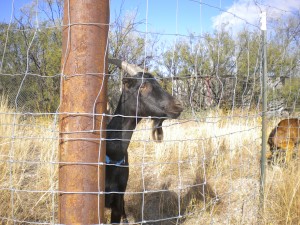 Fowl include eight Khaki Campbell ducks and ten chickens. The six duck hens produce, on average, five eggs each day. They require no special accommodations besides a poultry-netting subfloor beneath their house to keep the skunks from digging for supper. The ducks spend most of their time in the nearby irrigation ditch, so they are easy to keep and inexpensive to feed. We’re transitioning to Red Star chickens, which are weather-hardy and reliable layers. We have successfully incubated eggs and kept birds alive through the adult stage. We installed into the chicken coop a corrugated roofing tin subfloor that slopes away from the entry door, into a gutter, and then into a drain pipe that empties into a shallow basin the chicken excrement (i.e., fertilizer). So far, this arrangement has been more trouble than it’s worth. In total, we produce a dozen eggs each day, which gives us plenty of barter material for our neighbors who prefer humanely treated, free-range, healthy fowl. 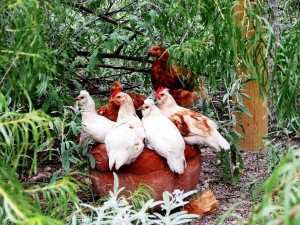 A deep-chest freezer holds a wide variety of foods with considerable convenience. We can a lot of the harvest and stack the jars in the pantry. Finally, we store much of the bounty in three root cellars, one dry and two humid (because no combination of apples, onions, and potatoes should be stored together, according to the books and articles we’ve read). The dry cellar is a cargo container surrounded by cinder-block walls and buried beneath a couple feet of soil. The humid cellars are relatively simple holes in the ground, marginally protected from critters with hardware cloth, pressure-treated lumber, and snap traps.

When I write “simple,” I mean conceptually. Digging the holes and constructing the cellars has been anything but simple for my old, worn-out bones.

We have an outdoor kitchen complete with dining area, wood-fired cook stove, two double sinks, plenty of scavenged counter tops, orno (Earth oven), and a hand-cranked mill. General sloth forced me to add a motor from an evaporative-cooling fan to power the mill. 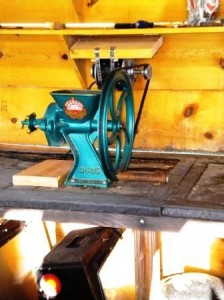 While we have grid-tied electricity, we continue to use the electric oven in the mobile home, particularly during the winter months. We have a microwave oven in the off-grid, straw-bale house, too. We often ignore these newfangled electric-powered ovens and the two ovens in the outdoor kitchen, opting instead for cooking with the power of direct sunlight. 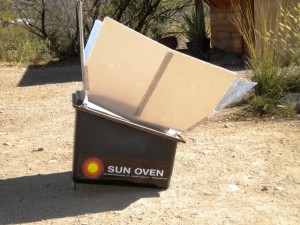 When we started this endeavor, about two years ago, I could barely distinguish between a screwdriver and a zucchini. And that tells you all you need to know about my construction skills as well as my gardening skills. As I’ve pointed out many times before, if I can do this, I can hardly imagine somebody who can’t. But you’d better get cracking. The time to plant a garden is not when you’re hungry.