The industrial economy, that is. On the brink, yet again. 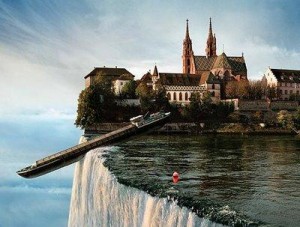 The real economy — not the born-again exuberance in the world’s stock markets — is stalling as the effects of easy money wear off. Indeed, investor fund flows haven’t been this bad since Lehmann Brothers collapsed in the autumn of 2008. The IMF says risks to the global economy are high, and policy makers are about out of bullets to ward off the demons. In short, the world’s industrial economy is headed for a crack up and the U.S. dollar is doomed. Small wonder, given the paltry amount of currency relative to the gihugic amount of derivatives.

Of course, had stock traders known the dire nature of AIG, for an easy example, the economy would have completed its ongoing collapse long ago. Fortunately, Americans prefer presidents and presidential candidates who lie about the likes of AIG (and, as nearly as I can distinguish, everything else).

But back to the smoke-and-mirrors recovery. It’s fizzling out and there is worse to come. The Wall Street Journal predicts collapse will come in 2011. Over on CNBC, the recommendation is to buy barbed wire as the endpoint of devaluation appears. Others prefer a different phrase: the next step down, also known as a dead end. If you’re a part of Saudi Arabia’s royal family — welcome to the blog, by the way, and feel free to post a comment — it’s time to get out before the apocalypse comes to the kingdom.

For the imperialist-in-charge, what to do, what to do? Now that the Keynesian approach has about run its course, Obama is set to re-open offshore drilling program in a feeble attempt to keep the current game going. And there’s undoubtedly more stimulus headed our way, even though we already passed the point of debt saturation: each new dollar of federal debt now subtracts 45 cents from GDP.

If you’re having a tough time swallowing the notion that the economy can go from apparent recovery to the toilet in a few years, remember what most people believed in 1930: they thought the bad economic news was behind them, too. It’s looking a lot like 1930.

Even usually clueless Americans are getting nervous about the economy — apparently they’re no longer watching television. But even the ever-soothing voices on the tube are pointing out that the gusher in the Gulf is getting worse by the day, with economic implications bound to bury the coast for decades. The BP spill is probably gushing on the order of 100,000 barrels per day, not the 70,000 bpd reported by BP, a number that keeps going up as they keep repairing the problem. The spill certainly exceeds estimates by ultraconservative marine scientists.

But even the latter scientists agree about the existence of the undersea plume (or cloud). I am definitely not applying the “scientist” label to anybody working for the Obama administration: those former scientists gave up their integrity card when they started lying in the name of political fortune. Their new jobs are to hide the facts, not reveal them.

Despite the ongoing game of obfuscation, striking similarities have emerged between the financial collapse of 2008-2009 and the Gulf disaster. Among other characteristics, BP is paralleling the actions of the big banks, aided by the Obama administration, in covering up the truth. It comes as no surprise that BP CEO Tony Hayward has racked up a “greatest hits” list of quotes only a politician’s mother could love.

Energy analyst Matt Simmons predicts BP will declare bankruptcy within a month. That would be one way to escape paying for damages. The more likely approach, in my opinion, is a full-scale bailout by you and me. That route is already wending its way through Congress, although GOP House leader John Boehner is shying away from the idea he proposed earlier.

In a stunning bit of good news — in the category of throwing us a bone — BP finally released the list of toxins in the dispersants. Now that I’ve seen the list, though, I’m not particularly happy about it.

Finally, a single article from the mainstream points out that maybe we should re-think our oil-drenched lifestyles. Oil drilling threatens our future, as even the BBC has determined. Will that be enough to get us off the devil’s excrement? Certainly not if Barack Obama or the politicians in Louisiana have their way.

This essay is permalinked at Energy Bulletin and Island Breath.