What are the causes and consequences of expensive oil? The first question is posed in this article, and answered surprisingly well by a neoclassical economist. He understands the relationship between the price of oil and economic growth, and he hints at constrained supply while also expressing irrational exuberance about continued economic growth. As an economist, I suppose he just can’t help himself on the latter issue, nor can he help turning a blind eye to the many environmental costs of economic growth.

Here in the homeland, we peaked in 1970 and we extract relatively little oil on land or at sea. BP’s 100-million-barrel reservoir off the coast of Alaska — er, rather, on a BP-constructed island, and therefore not offshore at all — will meet U.S. demand for less than a week. Meanwhile, long-time swing supplier Saudi Arabia is turning off the tap. So much for satiating our infinite desires with limitless oil from the Middle East. Even the International Energy Agency forecasts demand in excess of world supply.

As world oil supply has fallen, the price has exceeded $80 per barrel twice in recent history. Both events were followed shortly thereafter by sovereign-debt crises in several countries. We’ll likely cross the $80 threshold again soon, even as the industrial economy continues to nosedive. Considering the debt-related economic pain in Europe despite throwing money at the issue (i.e., papering over the economic mess), Keynesian economics makes no sense at all. The printing press hasn’t been sufficient in the U.S., either, and it’s the one-size-fits-all solution of the Obama/Bernanke team. This is the typical government approach: If it ain’t broke, fix it until it is.

I’m not suggesting the debt-based approach hasn’t been broken for a long time. But every attempt to “fix” the industrial economy represents a boondoggle atop a boondoggle, with every one destined for failure at a faster rate than the prior one. Helicopter Ben has created half the U.S. money in history within the last four years even as the money supply continues to crash. On one hand, states want more federal stimulus (i.e., keep the presses running) as the head into a second-half economic tsunami with no clue how to deal with it. On the other hand, pressure is building to stop or slow the printing presses, but it’s already too late: We cannot possibly pay off the current U.S. debt, so — from the perspective of Bernanke and Obama — there’s no point in slowing the presses now, despite ludicrous, vacuous threats from various factions of the tea party. Meanwhile, the sheeple are growing frustrated as they wonder where the jobs went and why the industrial economy remains in the abattoir. Nobody in a position of influence has the guts to tell them about energy decline and its economic consequences; even if anybody with the ear of the people were talking about it, the hyper-indulgent sheeple wouldn’t have the guts to listen, much less act on the knowledge.

Hyperinflation might be on the way, despite the crash in cash. At the very least, the near future will bring increased volatility and a host of economic woes.

The water is boiling around us and, like frogs, we’re failing to notice. Unlike frogs, we have the ability to see what’s going on, and how it’s killing us, but we prefer the culture of make believe over reality. So we pretend we’re immersed in an imperial spa. Fever? What fever? I just need another drink. Apparently the cancer of industrial culture removes cognitive capacity before it kills the host. 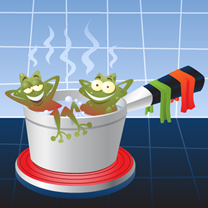 Continuing to pretend won’t help the dire situation on the housing front. As it turns out, housing and energy definitely are not too big to fail. Despite out best efforts to ignore reality, echoes of the Great Depression abound. As housing prices continue to decline, Americans lose the ability to use their homes as ATMs. As oil prices continue to increase, aftershocks continue to rumble through the system, with more quakes on the way.

And it’s not just housing and oil. The collapse in commercial real estate is fully under way, banks are withholding information from the federal government because they dare not open their books in the light of day, another credit crunch lies right out the corner because nothing about the financial system has changed since the last crisis of confidence, and bond vigilantes are coming to America and therefore to the world’s reserve currency.

Plenty of people here in the empire think there are alternatives to oil, thus failing to distinguish derivatives from alternatives. These derivatives will never pay their way, of course, much less serve as anything resembling a comprehensive substitute to crude oil. And without abundant liquid fuels, we cannot grow the industrial economy.

Other folks believe hydropower will keep the lights on in their neighborhood, without working through the consequences of capitulation of the stock markets. Why would the engineers and technicians keep showing up to run the electrical plant if they aren’t getting paid, either because all the banks fail or their employer’s stock is worthless?

Too little, too late, Bill Gates is urging us to spend billions on an energy revolution. But he’s not spending his billions on it, probably because he knows the fossil-fuel party is over.

As a result of running out of inexpensive oil on the way to passing the world oil peak in 2005, we witnessed an oil shock in 2008 that nearly brought the industrial economy screeching to a halt. Chief Executive Officer of insurance giant Lloyds warns of another price spike headed our way, and I cannot imagine the industrial machine of planetary death surviving oil priced at the expected $200 per barrel.

But I’m an optimist, as I’ve pointed out before. I think we can terminate the industrial economy before we move the assault from the Gulf on our southern border to the wholesale destruction of interior lands on our northern border even as it becomes increasingly clear the tar sands will not meet expectations. The events in the Gulf of Mexico illustrate an important point: As my detractors have been saying for years, we really are awash in a sea of oil. Are you happy now?

The disaster in the Gulf provides a perfect opportunity for the dead hand of Ronald Reagan to rise in the form of judicial activism. This pattern is blatantly apparent in the Supreme Court and all lower courts and is consistent with the notion that the right-wing thought police have taken over this country.

In support of my omnipresent optimism, historian Niall Ferguson has added his voice to the large and growing chorus predicting the collapse of U.S. empire by the end of 2012. If we cease to kill the industrial economy, it will continue to kill the living planet and all of us who depend upon it. Either way — with imperial collapse or reduction of Earth to a lifeless pile of rubble — we can stop worrying about power politics. As should be evident to any reader by now, I prefer a robustly living planet over a dying or dead one. As should be equally apparent to any sentient being, I don’t have much company on this particular point.

The economic endgame is rearing its head. The stock markets are headed down — way down — with a monster shock headed their way. One plausible scenario has collapse of the bond market following collapse of the stock markets. But at Dow zero, you’ll be a lot more worried about feeding your children than the rate of return on your bonds.

Meanwhile, out in the murdered Gulf of Mexico, BP has claimed success. Calls for a boycott will fade away and clueless Americans will continue to display an inordinate capacity for cognitive dissonance as they continue to demand abundant cheap oil even while throwing the occasional tantrum at corporations providing our drug of choice. You might go so far as to call this yet another example of American psychosis.

Will human life be wiped out by events in the Gulf of Mexico? In a word, no. We’re taking quite an impressive toll on the entire planet, but destroying our entire species with only the tools we’ve developed during the last two centuries will take more than a few years, our vaunted technological prowess notwithstanding. The Titanic of ecological overshoot has crashed into the iceberg of limited oil, leading to a painfully slow descent of the industrial economy. The descent is painful because it allows us to keep the current game going, re-arranging the deck chairs as we head straight for a rapid decline in the human population in the wake of a devastated Earth.

There is a better way. We know what it is. It’s time to give up our childish dreams and act like responsible adults. Is that too much to ask?