The risks of fiddling

American Empire provides bread, circuses, and all the toys we (think we) need, stolen from other countries and future generations. I can understand why people are reluctant to abandon the empire. In exchange for inhabiting a cubicle, you get to harvest the fruits of empire while avoiding any steps toward self reliance. You get to shower in the morning, kibitz at the water cooler with your friends, flirt with the hot thirty-something in the next cube, and dine on Thai take-out. What’s not to like, especially if, like most Americans, you couldn’t care less about the people we oppress to do your bidding or the costs to the living planet?

Immorality aside, there is a risk. The risk comes in two flavors. One flavor is the opportunity cost of abandoning the empire too soon. The other flavor is the bitterness that comes when you realize you waited too long to abandon the empire, and you are suffering and then dying as a result. And surrounded by a bunch of ugly boxes we call suburbia, no less. 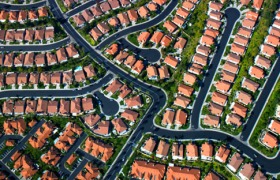 If you abandon the empire too early — before the lights go out, before the shelves are bare in the grocery stores, before the water stops coming out the municipal taps — you’ll forgo some of those imperial fruits. On the other hand, you’ll be ahead of the curve with respect to self reliance, you might ingratiate yourself into your community, and you’ll learn how to live on little. We’re all headed that way, with the ongoing economic collapse likely to be reach your house within two years and perhaps much earlier.

The second risk is the larger one, and also the more tempting one. It is based on your proclivity for dining on the fruits of empire a bit too long. I hate to get biblical, considering my beliefs, but if you hang on to the easy life in the city too long, the wages of sin is (sic) death. To take a more secular approach drawn from popular culture, try this line from No Country for Old Men: “This country’s hard on people, you can’t stop what’s coming, it ain’t all waiting on you. That’s vanity.”

So far, this country’s been very easy on people (especially Caucasians), one of the consequences of ready access to inexpensive oil. But that’s changing, and it’s about to change much faster. You can either get in front of the changes or you can let them roll over you. Think steamroller, and you’re a duck in a leg-hold trap.

Would you trade your human community for an online community? Some people with whom I speak are so reluctant to give up their 16 daily hours on Facebook they’ll gladly sacrifice human interaction for the joy of electrons. They will be hammering away at the keyboard long after their “friends” stop answering, long after the batteries run dry in the laptop, long after the grid has failed. Waiting, waiting, waiting until there’s nothing left to wait for.

Would you trade virtual reality for reality? Some people with whom I speak are so reluctant to give up their television shows they’ll willingly sacrifice human interaction for the feel-good dumbassery of television characters. They will be wondering what happened to their “friends” on television long after the television blinks out for the final time. Then they’ll wait for a studly hero to save them. He’ll be otherwise occupied.

Would you give up living because you fear the future? Some people with whom I speak are so unwilling to give up the notion of marauding hordes they’ll turn away from personal preparations for a decent future because they fear their preparations will be insufficient. Such a decision thus becomes a self-fulfilling prophecy: The collective unwillingness to prepare . We make our own futures, albeit constrained by reality. But some people with whom I speak are unwilling to make changes in light of a changing world, thereby ensuring change will happen to them instead of with them.

Would you trade your life for medical care? Some people with whom I speak are so reluctant to give up their employment “benefits” they will work until the industrial age ends. And then work a while longer, hoping insurance will cover their trip to the clinic for a flu shop. All the clinics will be closed.

Would you trade your life for a night on the town? For me, it would have to me a helluva night. Some people with whom I speak are so reluctant to give up eclectic and inexpensive (sic) restaurants and nightclubs they’ll keep their date with Destiny’s Child, thus sealing their own destiny.

Would you trade your life for a few bucks? How about for a lot of bucks? Some people with whom I speak are so reluctant to give up their puts and contracts in the markets — after all, there’s serious bling to be made off their expansive knowledge of peak oil and the financial markets — they will be trying to make money off their next trade long after the lights go out, thus precluding electronic trading in the belly of Wall Street’s beast.

Would you risk your life on the Technomessiah? Some people with whom I speak are so reluctant to give up their easy lives in the city they’ll bank on the ability of technology to bail us out of our dire economic mess. They fail to recognize that inexpensive oil is the Technomessiah. She died a few years ago, but she’s walking around, zombie-like, to save on funeral expenses. Burying a messiah isn’t cheap, you know.

Would you risk your life on the government? Any government? Some people with whom I speak are so reluctant to give up a high standard of living at low (sic) cost they’ll count on the ability of the government to keep the toys and jobs coming, courtesy of American Empire and its militaristic reach.

Would you trade your sense of humanity — your ability to become a human animal in the real world — for meaningless chit-chat at the water cooler? Some people with whom I speak are so reluctant to give up interpersonal interactions in the workplace they’ll gladly forgo the wonder of the human experience in a human community. They willingly, gladly, purposely hang onto a murderous way of living in exchange for the good life.

Would you risk the lives of your progeny, and all future humans, for the comfort of inexpensive (sic) fossil fuels? Some people with whom I speak are so reluctant to give up happy motoring and central air conditioning they’ll gladly ignore the cultures and species we destroy on our imperial path. By their actions, if not by their words, they demand a personal IV of cheap oil, just as this country mainlines crude.

What will it take before you notice the warning shots? If you think the empire cannot fall within a couple years, you’re reading a different set of tea leaves than the dozens of petroleum geologists, social critics, thought leaders, writers, historians, and economists to whom I’ve been paying attention.

What will it take before you notice the moral imperative? I’m not thinking about the morality of attending church services or donating to the community food bank; rather, I’m thinking about the real costs of everyday choices based on cheap living within the mainstream culture of the industrial economy.

What will it take before you begin preparations for a world of your own making? The real world awaits, beyond the edge of empire. And if you don’t think the United States represents an empire, then I don’t think you understand the meaning of the word.

Rome is burning. Why are you fiddling?

This essay is dedicated to the many people who will die in ignorance, apathy, or continued pursuit of the American nightmare. It is permalinked at Counter Currents, Island Breath, CFB483, and Insurance Today.