According to the extremely conservative International Energy Agency (IEA), we’ve passed the world peak for conventional oil (in 2006, they say). In a stunning nod to reality, even the New York Times agrees. In a bizarre case of committee-style cognitive dissonance, the IEA follows up on the admission that peak oil has come and gone with the conclusion that energy will never limit economic growth. In short, World Energy Outlook 2010 is (1) characterized by questionable assumptions and major omissions, or (2) a cry for help. Maybe both.

Not that we should believe IEA about anything related to oil. This is the gang that promised an annual decline rate of 9.1% in conventional oil, beginning in 2009. We’re holding at a decline rate of about 3%, year over year, since early 2009. 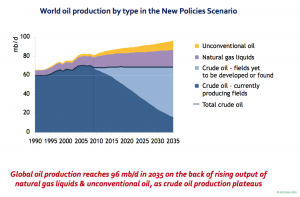 Taking a turn to the other side of the fossil-fuel coin, the IEA devastatingly projects global temperature will rise 3.5 degrees C by 2035. This prediction comes on the heels of increasingly dire projections, the latter of which all suggest habitat for humans will be gone from this planet by mid-century. I remain optimistic because none of these projections acknowledge physical limits on combustion of fossil fuels. That is, they fail to acknowledge the truly good news of economic collapse for our species and many others.

If we accept the IEA’s analysis and prediction, the few humans on the planet by 2035 won’t be worried about the price of air fare. We can only hope the projection for global temperature is based on the same kind of fuzzy logic used to conclude we’ve passed the world oil peak, then conclude we never will. Or we can hope the IEA is using climate change to justify economic contraction. I suspect we’ll see a lot of this type of argument in the coming months, as the world’s industrial economy goes up in flames.

Just when you thought the Great Bank Robbery was over, it turns out the courts are helping the banks steal money from homeowners. No surprise there, of course: Civilization is properly defined as the transfer of fiat currency from those who have little of it to those who have a lot. And there is nobody more civilized than Bernanke and Obama, as indicated by the way they print money on bank executives instead of us “little” people. If you have a sense of humor about the economic apocalypse, check out the video below, bearing in mind that if you can laugh at yourself, and you can laugh at the apocalypse, then you’ll never run out of material.

The American Dream, which is based on never-ending economic growth, is over. Change is coming, and it’s not the peaceful kind. But it’s bound to be better than living in country governed by war criminals who are adorned with Nobel Peace prizes.

The TechnoMessiah has met Reality. As with the Federal Reserve’s money-printing vs. the secular bear market, there can be only one winner. I’m betting on Reality, in a rout.