Kurt Vonnegut often described World Wars I and II as western civilization’s first and second attempts, respectively, to commit suicide. He hinted at peak oil as our third attempt in his memoir, Man Without a Country, which was published shortly before his death.

After burying our collective heads in the sand for two years, peak oil has crept back into the margins of the national conversation. But it’s too little, too late. The end of the world as we know it already struck when, in 2008, the price of oil skyrocketed. Keynesian economics forestalled some economic pain in the short term, at huge expense to the living planet, but the music’s about to stop playing. Better grab a chair. And don’t say you didn’t see this coming.

Three of the largest companies in the world — Exxon, Shell, and Aramco — admit we’ve passed the world oil peak. The cat’s out of the bag, though we’re working hard to convince ourselves there are no felines in a world awash with Felis catus while investors are trying to determine how to put some more fiat currency into their safe-deposit boxes as the ship goes down.

To use one example from the big oil companies, former Shell Oil president Jon Hofmeister knows the price of oil is headed much higher in 2011 or 2012. Hofmeister has company, too, in the form of energy guru T. Boone Pickens, who anticipates oil priced at $140/barrel, and soon. Financier and author Stephen Leeb is calling for a bullet train to $150 oil. In a stunning display of journalism based in reality, even Newsweek admits we’re headed for $150 oil, though speculators are held responsible (as is often the case when people are looking to cast blame).

Even the Wall Street Journal, which bills itself as the most important publication in the world (mipw), claims OPEC should be alarmed at the high price of oil. Although mipw will never admit as much, I’d bet OPEC is well beyond the point of alarm and into the arena of sheer, eyes-as-big-as-dinner-plates, crapping-their-pants terror, if only because there is nothing OPEC can do about high oil prices: The price of oil already has risen too high, too quickly to prevent dire consequences for the industrial economy, but OPEC will not respond, because it cannot respond.

Mother Jones has finally climbed aboard the peak-oil ship, although — as with most mainstream publications — it confuses the notion of “no more cheap oil” with “no more oil.” Still, Mother Jones is ahead of Forbes, which is sticking to the absurd claim that there are no limits to growth. It’s as if Forbes is vying for political office in the U.S. Even Forbes’ second cousin, Foreign Policy, knows the global industrial economy is dead and gone.

The occasional right-wing, windbag, talk-show idiot understands slightly more than the editors at Forbes. Sean Hannity knows the price of gas is going up, so he proposes invading (or re-invading) Iraq and Kuwait to “take all their oil.” If printing money is the last resort of an empire, then occupation must be the first.

Price-forecasting pros are predicting oil priced at $150/bbl by Memorial Day. Or perhaps that price will hold off until October. Either way, $150 oil puts the final nail in the U.S. coffin. In fact, $120 oil probably does the trick, as I wrote nearly 18 months ago. As with the last trip to $140 oil, demand is being driven by China, rather than by the OECD countries still gripped by an economic recession.

There is an alternative trigger, albeit with the same outcome: China’s bubble could pop, thus bringing the age of industry to an end.

If demand for oil continues to climb, then high oil prices will contribute to high food prices, thus triggering further food riots around the world. Some pundits claim food riots are coming to America, whereas others claim the high price of fuel will break out the riot gear. 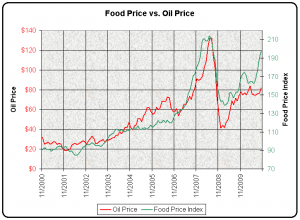 I’m guessing we can’t be bothered to tear ourselves away from the television screen long enough to notice increasing prices, much less act. After all, we keep ignoring a federal government that throws trillions of dollars at the giant banks while simultaneously denying support to states and main street. We keep ignoring a Federal Reserve bank that has been laughing at us since 2005, and probably much earlier, while the Fed is busy throwing Americans under the bus.

I am not suggesting the ongoing economic collapse will be complete the day the price of oil rises to $120/barrel or higher. Rather, I suspect we’ll witness a series of convulsions similar to those that transpired in the wake of oil rising to $147.27/barrel in July 2008. In the aftermath of that event, the U.S. industrial economy nearly reached its end several times between mid-September 2008 and mid-March 2009. If we assume a similar series of events in the wake of $140 oil between late May and late October, then western civilization could commit suicide between late July 2011 (two months after late May 2011, analogous to the collapse of Lehman Brothers and the associated near-collapse of the U.S. economy two months after oil hit its record high) and late June 2012 (eight months after late October 2011, analogous to near-capitulation of U.S. stock markets in March 2009 eight months after the price of oil peaked). In the middle of these dates lies the 14-month-old forecast of Société Générale, and March 2011 is right on line with predictions from the 60 or so people I cited in my recent presentation predicting complete economic collapse before the middle of 2012. Hofmeister’s most conservative forecast of a spike in the price of oil in 2012 buys a little more time for the industrial economy. And if “no limits to growth” Forbes is correct, western civilization will hang on until we commit suicide by climate chaos. The latter option is the one preferred by the world’s governments and most people I know.

But not me. I’m hoping peak oil and the consequent high price of crude oil will spell the long-overdue death of western civilization and the associated liberation, for the living planet, from the oppression of industry. Call me quirky — the government’s term is terrorist — but I’m a fan of life.

This essay is permalinked at Island Breath, Before It’s News, and Running ‘Cause I Can’t Fly.