I wrote an entire book on the life of the mind, if you can imagine that. A significant portion of the book was dedicated to the importance of a liberal education, and I’ve written about that topic in this space, too:

Liberal teaching means putting everything I know, and everything I am, at risk in the classroom. And not just in general, but specifically as well. That is, I put it all on the line during every meeting of every class. I’ve been wrong often enough to know it could happen again, and I’m willing to admit my errors in the pursuit of truth.

How courageous is this approach? Remember how it turned out for Socrates.

I am often criticized for continuing my educational efforts here at Barefoot College. During the last couple years, I have hosted more than 200 people, showing how we might muddle through an ambiguous future if we work together. In return, many people question whether I should be demonstrating this doomstead to potential future marauders. Most of these people are anthropocentric, short-sighted, narcissistic cowards commenting anonymously on fora focused on economic collapse.

When I point out I’m anti-civ, these and other people take issue with the language: “It’s better to be for something than against something, so your message should be pro, not anti.” I point out anti-civ means pro-life, but the latter label has been co-opted by a group with which I fundamentally disagree.

And so it goes, spiraling down into the uncomfortable abyss of talking past one another. We are so adept at finding an other with whom to part ways.

I am profoundly committed to a life of service. For me, a life lived otherwise is not worth living.

As any real reformer knows, some things are worth dying for. Service to community and lifelong learning certainly fill the bill. 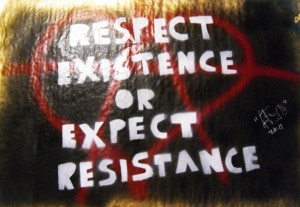 Mind you, I’m not acting heroically. I’ve built a lifeboat, after all, that might allow my survival for a few years beyond completion of the ongoing economic collapse. I’m not dependent on western medicine to maintain my life. In addition, absence of free will precludes an alternative route.

I recognize that it’s too late to save society, and industrialized society is irredeemable, regardless. Capitalism is assumed to be the best, most efficient economic system, but I think it’s better described as a pathology than an economic system. So I’ll keep moving seemingly immovable individuals beyond their comfort points. I’ll inject empathy, therefore resistance, into a sociopathic culture largely devoid of people willing to stand in opposition to the mainstream. I’ll move individuals beyond dark thoughts and into the light of a new world. I’ll move them beyond inaction. I’ll move them beyond the oppression of civilization and into the brave new world of a life that gives as well as taking. 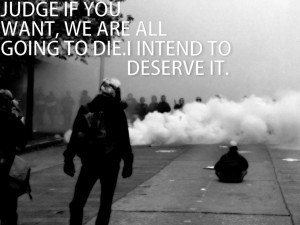 This essay is permalinked at Counter Currents.