The recent S&P downgrade of U.S. debt is yet another example of a circus sideshow in a nation filled with clowns sleepwalking off a cliff. Ben Bernanke, the master of ceremonies in the most ridiculous show on Earth, has come up with a new scheme to print money, hence plunge a financially bankrupt nation further into debt (i.e., plunge an empire on the edge even further into the economic abyss). On the other hand, some adamantly say we’ve seen the end of quantitative easing, as of this week (i.e., no more printing money from Ben). Others say, just as adamantly, we haven’t. Will the circus stay in town another week? Another year? Stay tuned.

Meanwhile, on the all-important oil front, Saudi Arabia cuts output, claiming the market is well supplied. I guess the price of oil pushing industrial economies into the abyss indicates adequate supply. Or maybe the kingdom is lying, and their fields are in precipitous decline.

Declining oil extraction at the world level and ongoing money printing by King Ben are, unsurprisingly, raising the price of oil. In response, Barack Obama is demonstrating the type of leadership I’ve come to expect from national politicians: He’s blaming speculators for the high price of oil while expanding military operations in oil-rich countries (e.g., Libya is the new quagmire). This failure of leadership should no longer surprise anybody, but it should disappoint everybody who claims to care about human life.

The war to nowhere continues in Afghanistan while the occupation of Iraq, intended to allow American access to oil (as I’ve been writing for years), continues to strengthen the hand of Iran. The latter country — the world’s third-largest oil exporter — is threatening to tighten oil supplies, thus driving the price up to $150/barrel. Bombing Libya was intended to alleviate this problem, but Libyan oil is in limbo. Perhaps the IMF forecast of a 60% increase in the price of crude within a year is right on the mark. If the forecast is even close, the industrial economy is done within months thereafter. The IMF is joined in the forecasting game by the ever-clueless folks at CNBC, who foresee $6 gas at the pumps this summer and also by John Mauldin, who predicts $8 gas this summer (we’ll never reach the requisite $180 oil associated with the former forecast and keep the pumps … well, pumping).

Graham Summers points out the U.S. dollar is falling off a cliff, and he worries “the Fed will push into a full-scale inflationary collapse within three months.” While I doubt hyperinflation trumps ongoing deflation that quickly unless China dumps the U.S. dollar as promised, Summers’ argument might explain why the Federal Reserve Bank has upped the ante even as the industrial economy hovers on the brink because the Fed has lost control of the monetary system. In addition, hyperinflation is the only governmental solution to overcome the problem of handouts exceeding taxes for the first time in 75 years.

As we continue to trade in tomorrow for today — that is, as western civilization continues to destroy the living planet — every energy “expert” in the world pines for civilization, thus carelessly wishing for continuation of the ongoing planetary omnicide. This makes as much sense as longing for intelligent design and suspension of the Laws of Thermodynamics, and is equally effective. The times are changing, and we can hope they change rapidly enough to save the final remnants of the living planet that support human life.

The planetary death wish on the part of energy gurus is one of many examples of partial understanding of the interconnected nature of our predicaments. Other examples abound, even though I’ll ignore the teeming masses of neoclassical economists who have no clue where are, how we arrived here, or where we’re headed. Jeff Rubin, called by Nicole Foss an economist who doesn’t understand economics, seems to believe the industrial economy can endure oil priced at $225 with a little attention to relocalization. And he describes how traders can makes tons ‘o money in the casino. Foss, a peak oiler who doesn’t understand peak oil, claimed the price of oil would never exceed $100/barrel after 2008 and predicted the 2-year bull run in the stock markets was done at the 6-month mark. She ties every thread to the ever-falling ball of string that is the housing market and she and her partner at The Automatic Earth continue to insist we’re headed for oil priced in the low double digits), albeit with Disaster As Usual (DAU) continuing for decades. I’ve no doubt deflation is under way, or that it will take another big bite after June if Benny Bucks cease to flood the markets. But it’s a good bet the shelves turn bare, the fuel runs out, and the water stops coming out the taps when banks and other companies are perceived as financially worthless (instead of financial bargains).

Other pundits exhibit similar bias toward extinction of every species on Earth, including Homo sapiens. Chris Martenson stresses the importance of accumulating and protecting financial wealth, especially his, as he charges $500 per hour to chat with people. The normally sedate Martenson, who indicated it was time to head for the hills a couple months ago, is calling for a big breakdown within a year. Is he just shaking us down for silver? And, as we head for the hills, should we pack our silver into our bug-out bags? Won’t owning precious metals make us targets, if only because industrial humans love shiny objects?

Similarly, “Tyler Durden” and his fellow traders at Zero Hedge are all about making money as the world burns. James Howard Kunstler longs for walkable cities served by railroads and sailing ships. Michael Ruppert is trying to save his own ass, apparently unconcerned about who or what comes in the wake of civilization. The list goes on. And on. The blogosphere is bursting at the seams with people who believe the industrial economy is more important than environmental protection, and that future generations of humans don’t count as much as the current crop.

Based on reading these fine folks — much less the mainstream media — you’d never know the mother of all paradigm shifts was under way. It seems nobody can give up their love for money. Obviously, industrial humans are poorly suited for this world, much less the one headed our way.

It’s small wonder the likes of Foss and the gang have as many fans as John Michael Greer. One quick way to increase your fan base is predicting DAU to infinity and beyond while claiming it’s a good thing. Civilized people love planetary destruction, as long as the lights stay on and the municipal water keeps coming out the taps. And especially if there’s money to be made along the way. 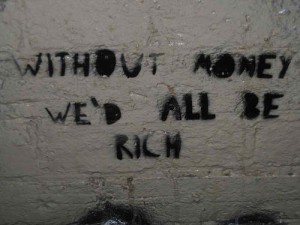 This essay is permalinked, sans hyperlinks, at Counter Currents.