This time is different

Okay, I’m convinced. I’ve been wrong this entire time, but I’m willing to admit the error of my ways. It’s time to move on.

The industrial age will last forever, with no negative consequences for the living planet, including an infinite number of human occupants. If we find a use for those species that have inadvertently gone extinct, then we will develop technology to replace the species or bring them back from extinction. Or both.

When atmospheric carbon dioxide becomes problematic for humans, then appropriate technology will be developed. We will either extract carbon dioxide from the atmosphere or develop a way to cool Earth. Or both.

The news coming out of left-wing environmental organizations is ridiculous, and I’ll tolerate no more of it on this website. We solved the ozone problem at the South Pole and, when and if it becomes necessary, we’ll solve it at the North Pole. And enough about saving the whales: When was the last time you needed a whale, anyway?

When needed, we will find or create a comprehensive substitute for crude oil. Or both. Prices of our God-given resources will provide plenty of warning with respect to requisite changes in human behavior or technological developments. The free market has never failed, and it will never fail.

With respect to the number of humans on Earth, we have plenty of room and plenty of food. We could fit all the people on this planet into Texas — which is not a bad idea — and have plenty of space left over. We have food-distribution problems, but I’m confident the coming One World Government will be able to handle that problem

I used to refer to the U.S. as “Google Nation.” Like Google, it seemed had nearly unlimited information, but no wisdom. But now I know why we’re called the wise apes (sapiens = wise). We have all the knowledge and wisdom we’ll ever need to get us out of any predicament. There is no challenge we cannot conquer.

Now that the recession has ended and economic growth is fully under way, I’d like to take my proper place in the industrial economy. I will consider a position in government because government agencies exist to serve citizens. The Ministry of Truth would be a good fit for my skills. However, I would prefer a position in the private sector even more than I would value a position in government because real change occurs in the private sector. Sustainable growth of the industrial economy depends on research and development from corporations. In addition, the private sector must lead the way in economic growth and in setting the bar for ethical, humane behavior toward humans and other animals.

Anybody who is not earning a decent wage in this economy clearly is not trying hard enough. I have no pity for those losers, and I am certain they will not impede my quest for a high-paying job.

With every paycheck and bonus, I will invest heavily in the U.S. stock markets, using the tried-and-true strategy of “buy and hold.” I look forward to assisting in my own way to the ongoing progressive efforts of companies that contribute to our happiness and well-being, including such leading lights as Monsanto, BP, and DuPont.

My share of the rural property is for sale, effectively immediately. Please post a comment here if you’re interested, or send me a message. In the meantime, I hope to invest in a suburban house like the one shown below. In a few years, I’ll flip the house for a larger, shinier model. 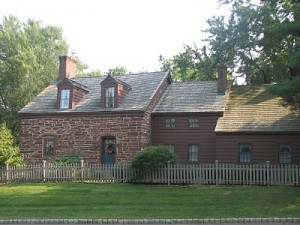 Enough reading this drivel, everybody: It’s time to go back to work. It’s time to move some pixels around on our much-deserved imperial monitors, time to shop ’til we drop, time for the vaunted consumer to kick the engine of economic progress into overdrive. Otherwise, we’ll never get off this disgusting, depauperate planet. Our journey to other solar systems, other galaxies, and other universes is limited only by our imagination. Let’s aim for the stars!

Ellie — one of the goats we helped bring into the world last February — had kids of her own yesterday (two does and a buck). Tentative names, subject to suggestions from readers here: Joker, Fool, and Prank.

This 14-year-old clip from Good Will Hunting seems timely:

This essay is permalinked at Island Breath.