Caged: Memoirs of a Cage-Fighting Poet

Cameron Conaway is not a warrior poet. He is the Warrior Poet. I strongly recommend his memoir, which will be published next month. I reviewed an early draft of the manuscript when I was finishing my employment at the University of Arizona. 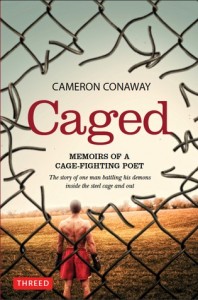 Caged is described at goodreads as “a captivating account of a young man who overcomes a family background and his own inner torment by learning to channel his frustrations into the physical world of mixed martial arts fighting and the emotional world of poetry and writing. The result is a literary, lyrically-crafted philosophical journey into the heart, mind, and soul of a modern-day warrior.”

“Conaway’s book takes you inside the soul of a man with the mind of a poet and the instincts of a fighter. It teaches the value of personal reflection, how life’s most painful moments can lead to a deeper understanding and appreciation of human nature, and just what is possible when optimism and determination combine to overcome tough odds.”

I worked with Conaway in several capacities, including as supervisor, mentor, co-teacher, and co-learner. He became, and remains, a dear and trusted colleague and friend, as I described in an earlier essay in this space. As such, this review is hardly “objective.” More accolades, undoubtedly penned by people with more intelligence and more objectivity than me, can be found at Conaway’s website.

The book provides a personal example of thriving through hard times. Gems of personal philosophy are encountered along the way. Consider, for example, Conaway’s impression of religious belief, as revealed in a couple quotes:

We give up our backs and allow religious myths to apply the rear naked choke to our minds.

Religious books are the most tremendously successful and inspiring books of all time. Millions of people around the world live good, generous, and pious lives with the help of them. Millions of others, though, take a different route or simply can’t separate life from fiction. They believe ancient myths are absolute truths and they cast their political votes by these “truths,” they even shame and set flame to homes of those who don’t believe in these “truths.” Some strap themselves with bombs and fly airplanes into buildings. They take whatever book they have that is deemed “religious” and they consider themselves “Pro Life” because of it, or they believe virgins will await them after death, or they see homosexuals as the scum of the earth, or they believe God will take care of and infinitely, divinely, beautifully replenish the environment as we mine and dump and pump and pollute at will. They take this book and, when they are voted into office because of their belief in it, they use it to (mis)shape our country, and, in turn, the entire world. How do I know? Because like every other human I’ve asked myself how I am here and why I am here and I’ve felt the pull to simply make shit up. Much of religion grew from an honest attempt to understand these fundamental questions. Much of religion grew from a difficult, good-intentioned, thoughtful process called “Making Shit Up.” Unfortunately, even honesty can’t turn shit to wine. So what happens when people take shit from others and fully believe it? Some good shit, sure. But not always. And regardless, it’s still shit.

In short, this is a witty, thoughtful, and highly readable book. It takes individual experiences and ties them to the world. The author knows where we are, and where we’re headed, with respect to our humanity, the industrial economy, and the living planet. In describing Conaway’s life (so far), Caged tells us much about our own struggles as we seek to live whole, balanced lives. In revealing himself, the Warrior Poet reveals the world.