Famed energy scholar Richard Heinberg is extremely conservative with his estimates, and he has updated his forecast. Whereas in spring 2009 he was predicting the industrial age would run until 2014 or perhaps even 2016, he’s changed his tune. Radically. Now he says it’s coming to a halt this autumn, a forecast that matches the November 2009 forecast of French bank Société Générale and is consistent with rapid completion of a long decline in the industrial economy in the wake of oil priced at $120 per barrel after being fatally weakened by the first big post-peak spike in 2008.

In other words, it’s game over, folks, and far sooner than most people imagined. Let’s hope Heinberg is correct, and also that the lights are out in time to save us from our hedonistic selves.

Looks like my memoir might be published, but not widely distributed. Regular readers know the story, and I cannot imagine anybody else is particularly interested. The short version is found in the latest issue of Conservation Biology as an article (pdf file). 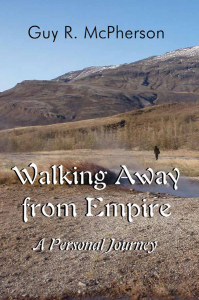 And it looks like I’ll not be hosting a television show about collapse. Ditto for the documentary film on my efforts, currently in development.

So much for my ego.

More importantly, it appears we will not have a solar ice-maker at the mud hut. Nearly a year in development, I’m already missing what I’ve never had. But it’s not the end of the world. It’s the beginning of a new one.

If you’re reading this post and you make it to one or more of these presentations, please introduce yourself before or after the event.

Sunday, 18 September at 11:00 a.m. (Community Action and Global Climate Change) and 1:00 p.m. (title to be determined for this workshop in the woods), Lake City, Michigan, Global change and community action, part of the formal program for Earthwork Harvest Gathering