Catch me on the radio, on the television, at the movies, and live

Listen to internet radio with AirAmarteifioRadio on Blog Talk Radio

Saturday, 4 May 2013, 7:00 p.m., premiere showing of Mike Sosebee’s film, Somewhere in New Mexico before the End of Time, Gallagher Theater, Memorial Student Union, 1303 East University Boulevard, University of Arizona, Tucson, Arizona (Q & A to follow). Description in the Tucson Citizen is here. Please spread the word about this event, and invite your friends via Facebook here.

23-27 May 2013, The Age of Limits: Conversations on the Collapse of the Global Industrial Model, south-central Pennsylvania. I’ll present twice: (1) “Forbidden Fruit: The Low-Hanging Fruit of Empire” on Saturday at 6:00 p.m. and (2) “Rapid, Unpredictable and Non-linear Responses” on Sunday at 2:30 p.m. 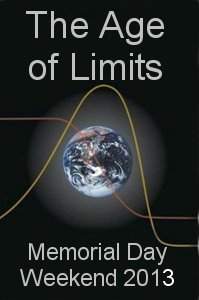