Utah: The Next Energy Colony

The first Tar Sands mine in the United States is an open wound on the landscape: a three acre pit, the bottom puddled with water and streaked with black tar. Berms of broken earth a hundred feet tall stand on all sides. To the north and south, Seep Ridge Road — a narrow, rutted, dirt affair — is in the midst of a state-funded transfiguration into a 4-lane paved highway that may soon be clogged with afternoon traffic jams of oil tankers and construction equipment. Clearcuts and churned soil stretch to either side of the road, marking the steady march of progress. 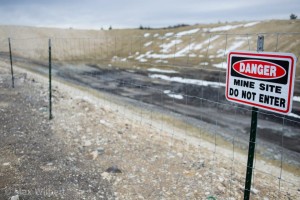 This is the Uintah Basin of eastern Utah — a rural county known for providing the best remaining habitat in the state for Rocky Mountain Elk, White Tailed Deer, Black Bear, and Cougar. In the last decade, it’s become the biggest oil-extraction region on the state, and in the last five years fracking has exploded. There are over 10,000 well pads in the region. And now, the Tar Sands are coming.

Thirty-two thousand acres of state lands situated on the southern rim of the basin — some 50 square miles — have been leased for Tar Sands extraction. If all goes according to plan, the mine at PR Springs that I’m looking at would produce 2,000 barrels of oil per day by late this year, with planned increases to 50,000 barrels per day in the future.

Dozens of similar mines are planned across the whole region. Along with their friends in state and local governments, energy corporations are collaborating to turn this region into an energy colony — a sacrifice zone to the gods of progress, growth, and desecration.

Twelve to 19 billion barrels of recoverable tar sands oil is estimated to be located under the rocky bluffs of eastern Utah, mostly in the southern portion of Uintah County. It’s a drop in the bucket for global production, but it means total biotic cleansing for this land.

Crude oil, tar sands, oil shale, and fracking: these are the wages of a dying way of life, and the ozone pollution that is already reaching record levels in this remote, sparsely-populated region is evidence of the moral bankruptcy of this path. There is no claim to morality in this path. It leads only to death, for us and for all life.

Alongside the test pit and scattered throughout the landscape, drill pads for seismologic assessment and roads to the pads have already been cut through the forests and shrubs, leaving behind a patchwork of shattered sagebrush and mangled juniper — testament to the Earth-crushing consequences of this “development.”

Situated at 8,000 feet of elevation, this wild region is called the Tavaputs Plateau. Unmarked, often muddy dirt roads make travel dangerous, and deep valleys plunge thousands of feet to the rivers that drain the region — the White River to the north, and the Green to the west. Both flow into the Colorado River, which provides drinking water for more than 11 million people downstream.

Resistance to tar sands and oil shale projects in Utah dates at least back to the 1980’s, when David Brower and other alienated conservationists fought off the first round of energy projects in this region. Thirty years later, the fight is on again.

It is likely that the PR Springs mine will be the bellwether of Tar Sands mining in the United States. If the project is stopped, it will be a major blow to the hopes of the Tar Sands industry in this country, while if it goes ahead smoothly, it may open the floodgates for more projects in Utah, Colorado, and Wyoming.

That is why resistance to this project is so important. That resistance is building. Strong organizations based in Moab (Before it Starts and Living Rivers) and Salt Lake City (Utah Tar Sands Resistance and Peaceful Uprising) are working together to organize against the project, and individuals and allies have been scouting the site and preparing to take action this summer.

Campouts at PR Springs will take place in May and June with more gatherings likely throughout the summer. An action camp will take place the fourth week of July, with activists and concerned people from across the country gathering to support one another, prepare for action, and make plans. All are welcome.

Time is short. There is no time to waste, and we are few. If we are to succeed, we will need your help, your solidarity.

Looking out across a landscape that might soon be a wasteland, my gaze wanders across the juniper, scrub oak, and sagebrush that wrap gently over the hillsides and drop into the valleys. The setting sun casts waning light on the treetops, and a small herd of Elk climbs a ridge in the distance and disappears into the brush. Overhead, the few clouds in the broad sky fade from red to deep purple, then to darkness.

The last birds of the day sing their goodnight songs, and the stars begin to appear, thousands of them, lighting up the night sky and casting a dull glow across the countryside. I take a deep breath, tasting the cool night air spiced with the scents of the land.

Max Wilbert is a writer and community organizer living in occupied Goshute territory, otherwise known as Salt Lake City, Utah. He originally hails for occupied Duwamish territory, also known as Seattle, and organizes primarily with the Great Basin Chapter of Deep Green Resistance to fight injustice and promote strategies towards the dismantling of industrial civilization.

Companies involved in Tar Sands projects in the Utah include Red Leaf Resources (which also works in the Oil Shale business and is based in Salt Lake City), MCW Energy Group, Crown Asphalt Ridge LLC, and U.S. Oil Sands, a Calgary, Alberta-based company.

Red Leaf Resources is currently working on a shale oil operation in the same region as the PR Springs mine, which could eventually produce 10,000 barrels of oil per day. Other large oil shale operations are planned for region by the Estonian company Enefit.

You can learn more about the resistance to Utah Tar Sands projects at the following websites: