Interviewed in the Doomstead Diner, mentioned at C-Realm

I was interviewed for the Doomstead Diner Friday, 16 June. Registration to the Diner is free, and the resulting podcasts are embedded at the two links below:

Plague! (permalinked at the The Burning Platform, Survival Place Blog, and The Daily Sheeple)

Podcast Page (near the bottom of this page, and titled “Guy McPherson: Life History and Philosophy”)

On Wednesday, 26 June, KMO interviewed Jay Smith for the C-Realm podcast. Based on his participation at the Age of Limits conference, Jay brought up my name as a topic. KMO ran with it. Catch it all here, starting at the five-minute mark and running to the halfway point of the podcast. Disparagement begins anew about 37 minutes in.
________________

Support the west-coast Reality Tour: Filmmaker Mike Sosebee and I will be responding to Q&A after showing Somewhere in New Mexico before the End of Time at various venues between Fresno and Seattle, 15-29 August 2013. If you have a venue, send Mike an email message at sosebeeTV@cox.net. Purchase your own DVD of the film here. 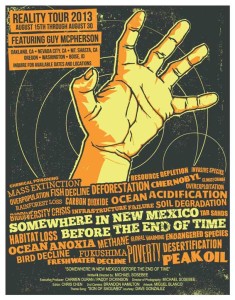 Please join me in supporting Blazing Kat Productions, the sights and sounds of Occupy. Post your secure donation here.

I’ve posted a new Classified Ad, and pasted it below. Track all the ads here.