My latest attempt at stand-up tragedy is embedded below. It’s based on my 5 October 2013 presentation in Three Rivers, California. My presentation is about 30 minutes, and subsequent Q&A accounts for the remaining 40 minutes or so. Big thanks to my hosts and videographers, Wendi Morrison and Keith Merritt.

A brief overview of my time in Three Rivers is humorously illustrated in the following video, also courtesy of Wendi and Keith.

On 6 October 2013, I spoke at a “March Against Monsanto” pep rally, a precursor to the 12 October 2013 nationwide march. The result is embedded below.

My latest essay for The Good Men Project was posted yesterday: Expressing Our Humanity As We Drown In It. 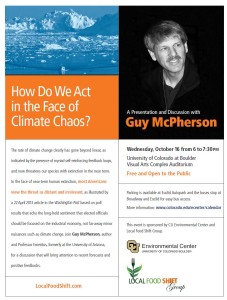