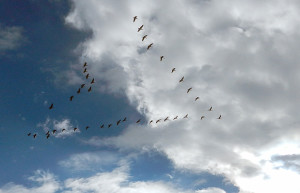 The geometry of nature in transit.

Years of concern and study, discussion, organizing and demonstrating lead me now, October, 2013, to a state of cognitive buzz. The buzz is about our unbelievably complex world-civilization and nature (all that is not of man’s making). There is the daily routine, varied everywhere, but here typically composed of often blue skies and tranquil, even moving and elegant moments, such as those of geese acting together on their way to somewhere. For me, for my fellow central Colorado citizens, friends and family, all seems normal and we all are comfortable in the assumption that tomorrow and next week will be about the same. Nothing to get all worked up about.

But in this place of comfort and tranquility there is this buzz: disruptive dispatchs arrive daily about broader realities that have already announced themselves, sometimes nearby – In Lyons, Colorado where my son has a home and design studio and which is still under virtual martial law until infrastructure of the entire town can be restored after September’s mega flood. Pick your place and time: Australia right now fighting, yet again, vast and devastating wildfires-and our Western Rockies are no stranger to those either-2012’s mega drought in America’s agricultural heartland…These and many, many other extreme weather events around the world are influenced, magnified by the effects of global warming and its influence on climate world-wide. The world’s scientific evidence points to a 95 to 99% certainty that our way of life has become, itself, a ‘force of nature’. And the prospects are not good; not only for our children and theirs, but also for many of us already here, now. A tsunami of studies and books and videos relaying the findings of the studies has arisen. To add noise to the buzzing scene there is also a similar number of arguments using the same media denying that anything of concern is happening. In this social-political climate it is easy (but also lazy) to ignore it all with its confusions, battle lines, fund requests, nasty ad hominem character assassinations, anxieties, fears (particularly of loss of social credibility and friends), ego-tripping, and shear demands on one’s time, serenity and sanity.

We all face choices every day. One is to ignore these issues. One is to deny them-on ideological or faith-based grounds-or simply because they seem so contrary to “common sense” and the tranquil reality that has ruled the cycle of days so far in our own lives. And one, finally, is to pay attention, consider the evidence (and challenges to it), and seek to respond, somehow, in self defense or in larger concern for life and in opposition to the bad stuff that is on its way. This includes the collapse of not just our own comfort zones but our industrial (250-year-old) civilization, and the extinction of plants and animals essential to our own survival. Yeah, that too.

Choices one or two, to ignore or deny, are not my immediate concern, not the source of the annoying buzz I’m afflicted with. How to address the third is. That is, how do I, first of all, and then with others, process the information available? I am not a scientist, politician or psychologist but a teacher and artist, “senior citizen”, parent, grandparent, westerner, ex soldier, hunter, fisherman, truck driver, farm worker… we all have similar backgrounds, really. I, and probably you, have to consider the evidence available from those qualified to publish it in order to shape my understanding and consequent actions.

My sources include, among many, these books: “Limits of Growth” (Club of Rome MIT study, 1972), James Hansen’s book “Storms of My Grandchildren”, Charles Ornstein’s “Ascent of Humanity”, Heidi Cullen’s “The Weather of the Future”, Mark Lynas’s “6 Degrees”, David Orr’s “Down to the Wire”, Allan Weisman’s “Countdown”, Lester Brown’s “Plan B 3.0”, Al Gore’s “The Future”, the IPCC’s 5th Report and Senator Rob Hogg’s “America’s Climate Century”.

Guy McPherson, Professor Emeritus, University of Arizona, has written several books and presents his collated understandings of what it all portends at venues all over the country, most recently one in Boulder that I attended. He sums up virtually all the latest studies and projections-and that summation perfectly frames my cognitive buzz.

Briefly, (McPherson’s points) all the evidence points to a locked-in 3.5 – 5 degree C global temperature rise above the 1850 ‘norm’ by mid century, possibly much sooner. This guarantees a positive feedback, already underway, leading to 4.5 to 6 or more degrees above ‘norm’ that historically correlates with atmospheric CO2 ppm; and that is a level lethal to life. This is partly due to the fact that humans have to eat and plants can’t adapt fast enough to make that possible for the 7 to 9 billion of us — so we die. There are other possibilities in his view of things-including the catastrophic nuclear danger of dealing with the fuel rods in Fukushima-Daiichi Reactor 4 (to start next month). But that is for another and extended discussion …

ALL of the source studies above are in essential agreement. Some focus on the problems of leadership (Orr). Some deal with population and its various cultures as they effect the limits of the earth’s support system (Weisman). Some address the broad, interrelated factors that make up the underlying crisis issue of global warming-climate change (Lester Brown and Al Gore).

The quandary for me, perhaps for you: what, knowing the probable validity of these dire, near term events, is the right thing to do? Is it a moral responsibility to speak out, holding nothing back, including the prospect of near term extinction of our own species within this century? How do we engage others in discussing such difficult to believe information? It has, for me, been persuasively argued that only taking personal “carbon footprint” actions such as changing light bulbs, buying a more fuel efficient car, not eating meat, recycling is not going to make the critical difference required. More is required and that more calls for collective action: organizing and making public educational and political statements. Even these are problematical; they may or may not take us to a “negative” tipping point (the way back to sanity and survival). Yet, is it not an obligation to load the dice in this way, by opposing actively and in concert with others those practices that are driving us toward disaster at an increasing speed? And, as Guy points out, is taking action not the best antidote to both apathy and despair?

These are the outlines of my quandary, my cognitive buzz.

We can all choose the one positive action that Guy uses to close his recent presentations: do good work to create moments of value. This, I think, is what art is about-and it is based in celebration of the mystery and phenomenon of life-one project, one moment at a time. And sharing.

Thanks to ulvfugl for pointing out a technical fix to the problem of the disappearing comments: “I’m using Chrome browser. Go to top right corner, click three horizontal bars, says ‘new incognito window’, get NBL, and everything is immediately updated. Can’t advise for any other browsers, but I assume it’s something to do with cookies and being tracked, etc, because being anonymous fixes it.”