Attitude During Collapse And Living In The Wild

by Bud Nye, who retired as a psychiatric nurse and from teaching high school physics, chemistry, and biology. He now works at learning and practicing permaculture, natural building, and living in the wild.

This idea clashes severely with the narcissistic, human-centered, human supremacist beliefs so rampant in our society today: any humans who survive the economic, social, ecological, peak oil, global warming, and nuclear collapses, now well in progress, must ultimately live within the energy limits of daily sunlight while sharing that sunlight with millions of other species. With this idea severe internal clashes often occur within people on at least two fronts. First, “Collapses? What collapses? There is no economic, social, or ecological collapse! We have plenty of oil and other fossil fuels. And certainly there are no global warming or nuclear-related collapses!” Second, “Humans must live within the energy limits of daily sunlight while sharing it? You mean like primitive Stone Age people did?! That is ridiculous! We cannot and will not go back!” (said as if we have some choice about this).

In this short essay I will not attempt to change anyone’s thinking about these issues that come directly from a number of irrational beliefs related to human superiority and civilizational “progress.” Here, I start with the assumption that the reader understands and accepts that these now global scale and interrelated collapse processes threaten the continuing viability of our species along with so many others. I assume that the reader accepts that in the long term if any humans survive — and most likely very few, if any, will — because of biological ecosystem energy and other constraints they will have to live within the limits of the daily sunlight within their local geographic area, dramatically unlike the way so many humans live today. For fundamental biological reasons, any surviving humans will eventually have to live in the wild at a Stone Age level of technology.

Assuming that a person has reached this point in their thinking, what skill has the most importance in adapting to collapse and learning to live in the wild? I would like to suggest that attitude does. What one thinks, the appraisals that they make of their situation, proves critically important. But how can we help ourselves and others learn to find old, unhelpful, habitual ways of thinking that cause us trouble and replace this thinking with more effective thinking, with more effective beliefs? Unfortunately, we teach and learn these things only with great difficulty. Even so, our thinking habits, our mental attitude, largely determine whether we will find learning and adapting to collapse and a living in the wild situation painful, debilitating, and uncomfortable experience, or a relaxing and invigorating one. Two people with the same physical makeup, the same knowledge, and the same skills for adapting to collapse or living in the wild can view the same situation in two quite different ways; thus, they will have two entirely different experiences. If one views the situation with contempt, fear, and negativity then they will live and experience that, but if they view the situation with a positive frame of mind, then they will have more positive results and experiences.

What does “a positive frame of mind” mean? I mean for it to refer to existential courage. Meanwhile, a vast difference exists between what we commonly know today as “positive thinking” and existential courage. The habit of positive thinking, an optimistic bias, undermines preparedness and invites disaster. This paragraph from Barbara Ehrenreich’s wonderful, must-read book, Bright-Sided, How Positive Thinking Is UNDERMINING America (2009) emphasizes this point:

But if early capitalism was inhospitable to positive thinking, “late” capitalism, or consumer capitalism, is far more congenial, depending as it does on the individual’s hunger for more and the firms’ imperative for growth. The consumer culture encourages individuals to want more — cars, larger homes, television sets, cell phones, gadgets of all kinds — and positive thinking is ready at hand to tell them they deserve more and can have it if they really want it and are willing to make the effort to get it. Meanwhile, in a competitive business world, the companies that manufacture these goods and provide the paychecks that purchase them have no alternative but to grow. If you don’t steadily increase market share and profits, you risk being driven out of business or swallowed by a larger enterprise. Perpetual growth, whether of a particular company or an entire economy, is of course an absurdity, but positive thinking makes it seem possible, if not ordained.

The perfection of certain skills forms the basis for the existential courage that I refer to, not what most people so often think of today as “positive thinking”. When one perfects the needed thinking and behavioral skills, the person coping with collapse and learning to live in the wild has a significantly easier and more comfortable time. This in itself builds confidence and subsequently more existential courage. Conversely haphazard and ineffective skills build negative appraisals and reduce courage while the ever-so-popular positive thinking produces out of touch with reality denial often accompanied by self-blame.

We need to build reality-based adaptive attitudes (the things we think and believe) along with skills related to the things we do. Each reinforces the other. Having done this, people will no longer start from a place of negativity and lack, but instead come from a place of confidence and skill. One of my favorite quotes, by Carl Sagan, relates directly to this: “It is far better to grasp the universe as it really is than to persist in delusion, however satisfying and reassuring.”

Much more influences mental attitude than just physical skills and their perfection. First, people must realize that they have control of their environment. Certainly the weather, topography, and many other conditions remain beyond our control, but ultimately we each have the ability — or responsibility — to control much that relates to our coping with collapse, living in the wild, comfort, and capacity to change. Second, we must realize they we have a choice — a choice to make things better or allow them to remain the same. It remains up to each of us how we choose to view any given situation and what we choose to do about it. We need to know and remember that our attitude, itself, remains a matter of choice — and that an attitude that hurts us emotionally or practically amounts to a very poor choice indeed.

I think that one of the most important lessons related to coping with collapse and living in the wild involves people learning that they have choices. Not only does this fit into the worlds of coping with collapse and living in the wild but it also applies to people’s presently more everyday lives. People soon realize that in everything they do, think, say, or feel, the outcomes — certainly the emotional outcomes — depend largely on their own choices. It remains their choice to feel happy or sad, comfortable, or uncomfort¬able, to “pass” or to “fail.” They have the choice to take control of their responses and not remain passive victims of circumstances, including what other people may think, feel, say, or do. All life, all happiness, remains a series of choices. The invaluable benefit gained in realizing and remembering this involves the fact that with these choices there soon comes a deep belief in “the self”: that infinitely complex microbial community that comes from and connects with all other life on Earth. People soon understand that many more things become possible — certainly not anything! — if they believe strongly enough in themselves and their choices. No greater basic lessons for a happy life exist than fundamental, basic mental attitudes, for once mastered all else comes much more easily.

One of the best ways to teach ourselves and others that we have control and choice involves rewording our everyday questions. When someone makes a statement that they feel cold, for example, we can ask why they choose to feel cold and what they can do about it. This way the responsibility becomes the individual’s and they need to make the choice to do something about the cold. If they still choose to feel cold and blame it on circumstances outside of the self, teach them that they have the choice and model for them what they can do about it. As you build a fire, or shelter, or find or make better clothing, emphasize how you make conscious choices — choices to feel warm — to do something about the problem. You do not passively blame it on outside circumstances but take responsibility and choose to change things for the better.

It remains important also to teach ourselves and others that during a collapse or living in the wild situation, we would best learn to separate our wants from our needs. Show them that choosing to concentrate on wants will only make things worse, for we can never fulfill all our wants. Teach them first to take care of their needs, and to appreciate all those things that help them to take care of those needs. In essence, help them not to concentrate on what they don’t have but to appreciate what they do have. In this same flow of thought, we can also help people understand that comfort exists in a relative way. In other words, feeling comfortable all depends on what we think, believe, and choose.

For some true-life examples of the principles discussed here, just a few of many possible examples, read Endurance, Shackleton’s Incredible Voyage by Alfred Lansing, about Ernest Shackleton and his crew’s two-year survival in the Antarctic after ice crushed their ship Endurance. And/or read Almost Too Late, The True Story of a Father and His Three Teenage Children Shipwrecked off the Coast of Alaska in Winter by Elmo Wortman. And/or read Shackleton’s Forgotten Men, The Untold Tale of an Antarctic Tragedy by Lennard Bickel about the Ross Sea party.
__________

You are invited you to a special screening of “Quietly into Disaster — A Plea for Survival” at the International Uranium Film Festival in New York City. It is a very moving German Anti-Nuclear Documentary. Produced by Germany’s most renowned Nuclear critic Holger Strohm, based on his epochal bestseller “Friedlich in die Katastrophe.” 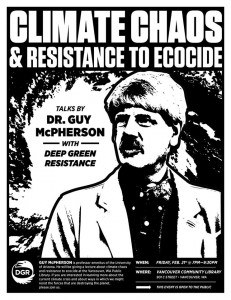 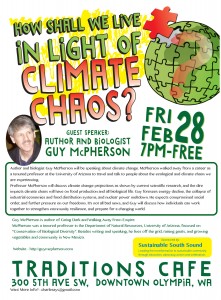 The Next Step: Living Courageously in a World of Transition, a 7-day seminar, 24-31 May 2014, Moho Creek, Belize, Central America.