Will Religion Become Extinct Before Us?

A recent study showed that from about 1970 to 1990 the percent of the United States population in the “unaffiliated” category—so far as religious identification is concerned—varied somewhat, but showed  no distinctive trend either upward or downward.  Since 1990, however, until 2010, the trend has been definitely upward.  The author of the study—Allen B. Downey, a Professor of Computer Science at Olin College of Engineering (in Massachusetts)—discovered (unsurprisingly!) a rather strong correlation between that trend and the trend in internet usage (note that each of the graphs below has a different Y scale, which can easily lead to misinterpretation of what the second graph “says” relative to the first one): 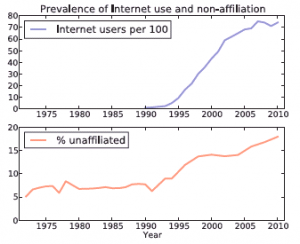 The question that this posed for Downey was:  Is there a cause and effect relationship here—in that internet users are more likely to be “unaffiliateds” than non-internet users, because internet usage promotes becoming unaffiliated?

Certainly such a relationship is plausible, given that the internet puts a wealth of information (and disinformation!) at one’s fingertips, enabling one to be exposed to a great variety of views, thereby broadening one’s horizon—and thereby causing one to question the verities that one had been exposed to up to the time when one began internet browsing.

But just because the relationship postulated here is a plausible one, it does not follow that it is an actual one—given the old “saw” that “correlation does not prove causation.”  Downey, however, was intent on investigating the relationship intensively, to determine whether there was a reasonably good basis for concluding that internet usage tends to lead to becoming unaffiliated with religion.

To conduct his research Downey went to the General Social Survey, which:

aims to gather data on contemporary American society in order to monitor and explain trends and constants in attitudes, behaviors, and attributes; to examine the structure and functioning of society in general as well as the role played by relevant subgroups; to compare the United States to other societies in order to place American society in comparative perspective and develop cross-national models of human society; and to make high-quality data easily accessible to scholars, students, policy makers, and others, with minimal cost and waiting.

The data obtained from this survey consists of questionnaire answers to a series of questions, some pertaining to personal attributes (e.g., race, age, education, income, gender), others regarding one’s behavior, views, etc.  The problem with such data, of course, is that although a person can be expected to be truthful about some of his or her characteristics, the individual may be reluctant—for whatever reasons—to be truthful about some behaviors (e.g., sexual practices) and some views.  Given the latter fact, it is somewhat surprising that so many (a relative judgment, to be sure!) are claiming to be unaffiliated.

However, the results of a recent study by David Olson, Director of Church Planting for the Evangelical Covenant Church, found that:

the actual rate of church attendance from head counts is less than half of the 40% the pollsters report.  Numbers from actual counts of people in Orthodox Christian churches (Catholic, mainline and evangelical) show that in 2004, 17.7% of the population attended a Christian church on any given weekend.

What Olson’s study suggests is that the rate of non-affiliation may be far greater than the figures that Downey used.  That possibility raises the question:  What are the church attendance figures, from year to year, for the period 1990-2010, and how do those figures correlate with internet usage?  Given that such figures do not appear to be available, no answer to this question is possible.  However, because actual church attendance would seem to be a better measure of non-affiliation than the measure that Downey used—answers to the question, “What is your religious preference?”—it is difficult to give much credence to Downey’s results.  As the old “saw” goes, “GIGO—garbage in, garbage out.”

In the absence of time series data on church attendance for the period of 1990- 2010, it is impossible to know (a) if there is a trend, if so, whether (b) the trend is steeper than that for internet usage, (c) less steep, or (d) has about the same steepness.

In a very real sense, however, Christianity—defined as the religion of Jesus—started on a path of extinction by mid first century, and was dead before the end of the fourth century, thanks to the Roman emperors Constantine and Theodosius I!

17-18 May 2014, all day, Terra Nova de Corazón, Ecuador, grief-recovery workshop (details on poster below, click here for additional information, and follow the event on Facebook here) 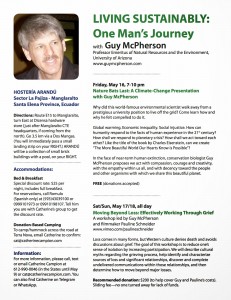