Humans have been geoengineering since the dawn of agriculture. Plows turn living soil into lifeless dirt while releasing carbon dioxide into the atmosphere. This process is properly termed geoengineering, and it has clear implications for climate change.

We continue to geoengineer every time we fire up an internal-combustion engine. Or turn on the lights powered by a coal-fired power plant. Or put a plow into a cornfield. Or … well, you get the idea.

Geoengineering is real, and it has been going on since civilization began. For much of that time, humans have been ignorant about the consequences. Even the compound word is relatively new to the English language.

On the other hand, the type of geoengineering proposed by the well-intentioned, easily misled folks promulgating mythical chemtrails is imaginary. This approach has been discredited thoroughly in the scientific community — notable critiques based on reason can be found here, and here — but the conspiracy freaks continue to pound the drum of their collective imagination, rabidly avoiding the evidence in a manner reminiscent of the deniers of abrupt climate change. I’ve no doubt they’ll shy away from reading the evidence presented in this short essay because it is contrary to their favorite faith-based junk science.

“Look up in the sky,” they proclaim, as if condensation trails provide convincing evidence of members of the Dreaded New World Order spraying toxic chemicals into the atmosphere. Operating in an evidence-free zone, chemtrailers offer excellent examples of confirmation bias, even when the “confirmation” is illusory. For a seriously scientific explanation, the likes of which chemtrailers are not interested, read this article.

In a move surprising only to the true believers in the chemtrail myth, the only journal article supporting the notion was retracted shortly after its publication. Check it out here. On the other hand, a paper published in an August 2016 issue of Environmental Research Letters further debunks the notion of a chemtrail conspiracy.

I don’t know which is worse: the chemtrail conspiracy crowd or the larger group that believes voting for the lesser of myriad evil candidates will lead to solutions for myriad insoluble predicaments. If you are contemplating The Donald, Jeb, Hillary, Bernie, or anybody else willing to take on the task of working for the big banks while allegedly promoting democratic ideals, your faith in a flawed system is unsupported by evidence (which, now that I think about it, is why it’s called faith).

Instead of voting for a substantive difference in this irredeemably corrupt system, one may as well go on the speaking circuit to profess the ills of the invisible, motive-challenged Illuminati trying to kill us. If they are trying to kill people, then they are failing miserably: The human population grows by more than 200,000 people each day. If anybody in a position of influence wants to kill people, war has worked stunningly well throughout human history. And the clueless followers who vote for the clueless “leaders” fall for war every time (conquest works, too, and is the tool of choice in America’s toolkit). The string of patriotism is easy to pull, and the groundless citizenry is yanked along for the ride of lies.

Initially, the chemtrail crowd claimed they — whomever “they” are — are trying to kill us by spraying toxic chemicals from airplanes. More recently, probably because of the abject and obvious stupidity of their former argument, the chemtrailers claim they — presumably the same mysterious “they” — are trying to keep us alive by blocking incoming solar radiation (skies are becoming brighter over time, probably because high-altitude ice particles from aircraft contrails scatter the incoming sunlight).

Actually, the arguments are so varied and ludicrous I can’t keep up with the latest excuse to blame others. HAARP is sometimes brought into the fray, apparently to double down on the conspiratorial “other” expressed with the use of the word “they.” And therein lies the heart of the issue.

Blaming others obviates responsibility. If the bad guys are spraying, regardless of their intent, then it’s not my fault. Liberated from blame, we need not change a thing about how we live. If “they” are manipulating the weather and climate, we can keep living in the city and depending upon the services rendered therein. We can continue to promote the omnicide of civilization, sucking at the teat of empire. Why would we not?

We claim to be self-reliant. But take away the Nanny State and I doubt we’ll see many citizens taking care of themselves, much less each other. As a society, we traded in Edward Abbey’s anarchism-inspired version of the American Dream for a few extra dollars a long time ago. We continue to vote for patriarchy at our own expense (albeit with the attendant, unacknowledged privileges). 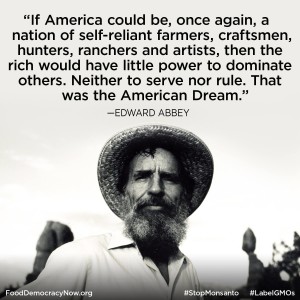 For readers interested in the science of geoengineering, I’ve copied below some relevant information from my long essay, “Climate-Change Summary and Update.” Even a cursory glance at this information reveals what any rational person already suspects: Further attempts to use the tools of civilization to address a predicament created by civilization cannot be expected to succeed. The hubris underlying these attempts is stunning only to those unfamiliar with patriarchal human behavior.

The Intergovernmental Panel on Climate Change (IPCC) admits global warming is irreversible without geoengineering in a report released 27 September 2013. The IPCC is among the most conservative scientific bodies on the planet, and their reports are “significantly ‘diluted’ under political pressure.” On 22 April 2014, Truth-out correctly headlines their assessment, “Intergovernmental Climate Report Leaves Hopes Hanging on Fantasy Technology.” As pointed out in the 5 December 2013 issue of Earth System Dynamics, known strategies for geoengineering are unlikely to succeed (“climate geo-engineering cannot simply be used to undo global warming“). “Attempts to reverse the impacts of global warming by injecting reflective particles into the stratosphere could make matters worse,” according to research published in the 8 January 2014 issue of Environmental Research Letters. In addition, as described in the December 2013 issue of Journal of Geophysical Research: Atmospheres, geoengineering may succeed in cooling the Earth, it would also disrupt precipitation patterns around the world. Furthermore, “risk of abrupt and dangerous warming is inherent to the large-scale implementation of SRM” (solar radiation management), as pointed out in the 17 February 2014 issue of Environmental Research Letters. About a week later comes this line from research published in the 25 February 2014 issue of Nature Communication: “schemes to minimize the havoc caused by global warming by purposefully manipulating Earth’s climate are likely to either be relatively useless or actually make things worse.” Finally, in a blow to technocrats published online in the 25 June 2014 issue of Nature Climate Change, a large and distinguished group of international researchers concludes geoengineering will not stop climate change. The U.S. National Academy of Sciences piles on with a report issued 10 February 2015, concluding geoengineering is not a viable solution for the climate predicament. An analysis in Europe reached the same conclusion in an assessment published 16 July 2015. As it turns out, the public isn’t impressed, either: Research published in the 12 January 2014 issue of Nature Climate Change “reveals that the overall public evaluation of climate engineering is negative.” Despite pervasive American ignorance about science, the public correctly interprets geoengineering in the same light as most scientists, and contrary to the techno-optimists.

Unimpressed with evidence and public opinion, some scientists forge on, illustrating that the progressive perspective often means progressing toward the cliff’s edge. As reported in the 27 November 2014 issue of New Scientist, initial efforts to cool the planet via geoengineering have taken shape and might begin in two years.

I don’t mind the insanity of the chemtrail crazies except when the insanity is pointed my way. Unfortunately, it happens now and then. Fortunately, I’m so accustomed to dealing with insanity of all types that it’s more a source of amusement than aggravation.

I spent a bit of time two days ago in conversation with Kevin Hester and Robin Westenra (Seemorerocks). The resulting audio file is embedded below, and the description and audio are linked here.

McPherson’s latest book is co-authored and illustrated by Pauline Schneider. Ms. Ladybug and Mr. Honeybee: A Love Story at the End of Time can be ordered from the publisher here and Amazon. Trailer is embedded below.