Ms. Ladybug and Mr. Honeybee: A Love Story at the End of Time

Below, I’ve copied the first three chapters of my latest book. Illustrated and senior-authored by Pauline Panagiotou-Schneider, Ms. Ladybug and Mr. Honeybee: A Love Story at the End of Time is my second book-length work of fiction. It is intended for ages 11 and up. The book can be ordered from the publisher and also from Amazon. Since early 2016 it is also available in audio format. The trailer is embedded beneath this excerpted text.

For more than 4.5 billion years the planet Earth had turned and changed and even crashed with an asteroid to form the moon from the dust of the crash. About a billion years after Earth formed, a rich variety of life began to grow. Through millions of years life evolved and died off. Throughout this seemingly endless stretch of time the Earth turned and life grew on her body, and life died on her body, and life grew again on her body. Always life would grow and then die and then grow again, wondrous and different from before, but somehow the same!

Life on Earth has always been like a wave. It comes in and it goes out, and comes in and goes out again. This journey is short compared to the journey of the universe. Earth and all the life it harbors is comprised of the dust of billions of stars that arose and blinked out within the universe we inhabit.

The orangutans knew, and the baboons knew, and the hummingbirds knew, and especially the honeybees knew, for they were among the first to die. Some of the people tried to save them, but it was already too late.

Most of the humans chose not to try to understand the rest of the creatures on Earth. Humans were an odd species, although a few listened and understood their brethren. These few humans stood with the animals at the end of the Sixth Great Extinction to aid and comfort them.

The humans, too, were going extinct. There was a great sorrow across the Earth as the reality became widely recognized.

This is the story of one little Honeybee, perhaps the last one, who made a friend of Ms. Ladybug, at the time of this great cataclysm. It’s a love story at the end of time.

Mr. Honeybee had been waiting so long for his queen to return to the hive that he’d grown desperately worried and set off to find her. She had been gone for a few days and he knew her absence was not a good sign. There were hardly any nurse bees left at the hive and all the honey gatherers had disappeared. Mr. Honeybee was very worried that his hive was going to suffer collapse, as had so many other hives. It was very unusual for drones like him to leave the hive, but he loved his queen and he had to find her, no matter what.

Burdened with worry and anxious about the future, he took a big gulp of honey and a little sip of royal jelly and set off to find his queen. It was early on a summer day.

He was heartbroken as soon as his flight carried him a few meters from the hive. There were flowers deep in bloom, but no other honeybees to be seen. In one garden he saw a human wearing a mask and spraying the flowers from a bottle. He had heard from the honey gatherers that the sprays were lethal. He darted quickly away from that garden and his little bee heart quaked with fear.

He imagined his poor queen drawing her last breath after a long sweet drink of a poisoned flower. A tiny bee tear formed in his bee eye. But then he gathered his courage and forged ahead. He could not stop until he found her.

He came to a farm that he’d heard about from the honey gatherers. It was supposed to be clean and safe for them, and he hoped to find his queen there. He hoped she’d missed the poisoned garden and come here instead. He had so much hope and he crossed one of his little bee toes hoping, hoping, hoping she would be here. He was sure of it. He could feel her!

And then, he could smell her too!

He heard her unique buzzing before he saw her. Only a second later, she heard him, too. By the time their multi-faceted, compound eyes made contact, they were anxiously anticipating their reunion. You might even say they were abuzz with excitement. 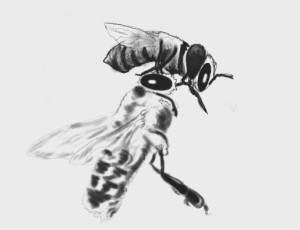 In the midst of exhilaration, they nearly fell to the ground when they collided in midair. Oh, the profound joy they experienced because they were together at last!

“Where have you been?” Mr. Honeybee asked. “I thought I’d never see you again. I was so worried.”

“Well,” the queen answered, “I became very concerned about the nurse bees and the honey gatherers. I decided to take a look around.”

“Oh, no!” exclaimed Mr. Honeybee. “You should’ve asked one of us to go. You must not put yourself at risk.”

“I know,” said the queen, “but there were so few bees around. And once I was outside the hive, I became very confused.”

Mr. Honeybee listened intently while studying the queen’s body language. She seemed sluggish, probably because she was tired.

“We know about those nasty chemicals the humans are spraying,” continued the queen, “but I’m sure there’s more. I’ve never been so confused upon leaving the hive before. Maybe there’s something in the air we don’t know about.”

“I’m sure there are many things we don’t know about,” said Mr. Honeybee. “The humans are always stringing up wires and digging trenches and kicking up dust and spewing dark-colored smoke.”

“Not to mention,” replied the queen, “the noise and vibrations. And it’s become so dry lately.”

“I know,” said Mr. Honeybee. “It’s hard to find flowers. The honey gatherers have to fly so far, and work so hard, just to bring back a little nectar.”

“But enough about that,” said the queen. “Can you take me back home? I’ve lost my way, and I’m soooo exhausted.”

“Follow me, my queen. I’ll have you home in a few minutes.”