I wanted only to try to live in accord with the promptings which came from my true self. Why was that so difficult?

And then, about three-quarters of the way into the book, Hesse struggles anew and in greater detail with his own question.

I did not exist to write poems, to preach or to paint, neither I nor anyone else. All of that was incidental. Each man had only one genuine vocation — to find the way to himself. He might end up as a poet or madman, as prophet or criminal — that was not his affair, ultimately it was an arbitrary one — and live it out wholly and resolutely within himself. Everything else was only a would-be existence, an attempt at evasion, a flight back to the ideals of the masses, conformity and fear of one’s own inwardness.

In sharp contrast to Hesse’s perspective, it seems I should’ve been using the flow chart shown below throughout my life within the dominant culture. Shifting the blame is necessary to “succeed” in this culture. 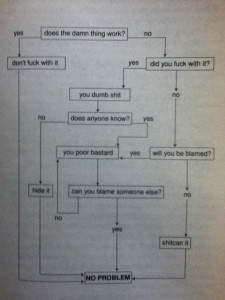 There’s no better place to be than atop the wave. The adrenaline surges. The view is spectacular. It’s as if you’re on top of the world.

Greatness is found atop the wave. Few people spend time there.

Ahead of the wave, people are crushed on the rocky shore. When the wave is intellectual, an idea is crushed instead of a surfer. And sometimes the shattered idea is joined by an ill-fated dream.

I found myself ahead of the wave countless times during my life on campus. A typical scenario had a few faculty members coming up with a complaint or a fresh idea. We’d develop a five-minute case, schedule a meeting with the dean or department head, and sally forth.

The day and time would arrive. I’d lead the way into the office of the targeted administrator. Everybody else would magically, suddenly fall silent or disappear.

Ditto for my failed attempt to escape American Empire. If you were thinking I’d learn from my mistakes, you’d be mistaken. And, as it turns out, there is no escape. The empire is relentless and unending. Until it ends.

And ditto, again, for my ongoing attempts to break the bonds of patriachy. The dominant culture has a powerful grip. Breaking free means letting go.

Rinse and repeat for concluding and reporting the case for abrupt climate change. I’m a very slow learner.

On 6 August 2010, I posted the following essay, verbatim, in this space. As revealed by the essay, I was having doubts about my decision to leave campus. More than six years later, the doubt has been long confirmed. The essay’s title: “Cleaning Up.”

My office, that is. I was asked to move out of my office the same month one of my articles graced the cover of the premier journal in my field Although faculty members are fleeing my department like fleas from a drowning dog, the interim department head needs my office. It’s the only faculty office in the building without a window, and I’m pretty sure nobody wants the space except the department head’s graduate students. But that’s none of my business.

And this essay isn’t about bitterness, anyway. It’s about the decisions we make in light of an ambiguous future. One of the costs of making moral choices is breaking the strong emotional ties to a prior life. My own future, if I have one, is necessarily rooted in the past. So I’ll start there, recognizing the inherent self-absorption of my approach. Which is nothing new for my regular readers.

For the better part of a decade, I was the model professor, if only from the standpoint of university administrators. I taught more courses than I was asked, completed more published research than nearly all my peers, and had an active record of service to various mainstream professional entities.

Then, realizing I had an obligation to the citizens paying me, I woke up and starting doing work of some import. As with most of the students in my classrooms, the citizens didn’t appreciate me, at least not upon initial inspection. Learning is difficult, especially when unlearning is required along the way.

I maintained abundant activity of high quality in the three expected arenas of instruction, scholarship, and service, and I added one more delicacy to my overflowing plate: social criticism. I began to write for the general public, most frequently in the form of guest commentaries in various newspapers. My first opinion piece was an accident: When the university president refused to answer the letters I sent directly to him, I sent one of the letters to the local morning daily paper, thinking they might pursue it as a news story. They published it as a guest commentary. That very day, the president of the university responded to my earlier letters. And not kindly, either.

I was hooked. For the next decade, my opinion pieces focused on various aspects of faith-based junk science, including creationism, illiteracy, denial of global climate change, and denial of limits to growth. Since most of my colleagues were (and are) swimming in the main stream, my approach allowed me to simultaneously offend my colleagues and the general public. In addition to writing for the taxpayers, I extended my service commitment to facilities of incarceration at the request of a new and soon-to-be dear friend.

In response to my newly discovered commitment to relevancy, and although I’d been the lowest-paid faculty member at my rank in the entire college for a decade, the administration soon ramped up the pressure. It wasn’t long before I was viewed as a pariah on campus, and the dean of my college went so far as to libel me. Soon enough, I was banned from teaching in my home department and my scholarship and service were routinely denigrated.

But my students were learning to think, an aspiration reputedly revered but actually despised at all the large, research-oriented institutions with which I am familiar. Real education makes people dangerous. They might go so far as to question the obedience-at-home, oppression-abroad mentality requisite to propping up an empire. My Socratic approach was successful according to the only metric that mattered to me: real learning. The kind that sticks in your craw after you’ve fed at the trough of knowledge. The kind that gives a person the ability, courage, confidence, and desire to question the answers. The kind that changes lives, one life at a time.

Imagine the bittersweet nature of my departure. Recognizing the costs of imperialism, no longer could I tolerate living at the apex of empire, a large city. Recognizing the moral imperative of living outside the main stream, I left the easy, civilized life for a turn at self-reliance in a small community. Recognizing I was doing good work, and doing it well, was insufficient grounds to keep doing it.

I’m not sure I’d do it again, considering the contrary choice of my best friend. I certainly understand why, given a choice, many people would rather die than live outside the industrial economy. I understand, too, why most people who spend time at the mud hut depart with a renewed commitment to civilized living. After all, culture has convinced most people they have a personal investment in maintaining the industrial economy, rather than bringing it down. And it’s clear to most of my visitors that this new life of mine is tough on the mind and even tougher on the body.

Judging from the overwhelmingly negative response to my departure from the hallowed halls, I chose the perfect age to change life pursuits. All people older than my 49 years (now 50, if you’re keeping score) claim they don’t have the energy, at their advanced age, to do what I’ve done. All people younger that I claim they don’t have the money to do what I’ve done (as if they could not join others, as I have done, by necessity and choice).

Although apparently I made the right choice at the right time, getting out of the industrial economy shortly before it reaches its overdue terminus — and there is no unburning this bridge, even if I wanted to — I have lost a majority of influence I might have had (as well as a majority of the ego-stoking limelight). Suddenly those three letters behind my name have lost their power. Because I am no longer active in the academy, I am not asked to deliver seminars at other institutions. I no longer teach classes through the honors college, which was willing to put up with my wacky ideas after my home department wasn’t. I’ve moved too far away to serve populations in facilities of incarceration. And, from a strictly personal perspective, I miss the inmates and honors students with whom I was fortunate to work. I think about them and their wisdom every single day as I move endless tons of dirt, plant trees in the orchard, and make innumerable other preparations for thriving in the post-carbon era.

At the most specific level, few people face the choice I had. The proverbial brass ring of academia — the tenured faculty position — is a rare find. Once ensconced in the easy life of the ivory tower, particularly at the level of full professor — or any other position for that matter, inside or outside academia — few people would consider the implications of their lives for other humans and the entire living planet. At a more general level, I am hard-pressed to come up with any other person who would leave a high-pay, low-work job for any reason, much less morality. It occurs to me that forfeiting the easy life of tenured professor for the challenge of living outside the mainstream is the wackiest idea I’ve had yet.

Clearing the final shelf of books, I turned to the last pages of my most comprehensive piece of social criticism, Letters to a Young Academic. The words seem a fitting finale to the chapter I’ve closed:

I launch this paper boat with a final bit of advice about the life of the mind: Never take it for granted, for it could be snatched away tomorrow. The life of an academician is challenging, to be sure. It demands stamina of the mind and occasionally of the body. It requires personal sacrifice for the common good, a profession on full public display, and a predisposition to swim upstream against a strong cultural current. It is not for the faint of heart or the feeble of mind.

But the rewards are supreme. You are allowed to live a life of leisure, in the historical sense: You choose the work you do. Through the lives of your students, you experience life and death and the wonderful emotional roller coaster of youth. As such, you can choose to remain forever young, if only vicariously. You have opportunities to serve as a mentor. And, if you are worthy and fortunate, somebody might endow you with that noblest of distinctions by calling you “teacher.”

I was interviewed by gardener and organic original Alan LePage on Sunday morning, 15 November 2015. I joined the show at the 90-minute mark, and the episode is archived here.