How Hot, How Fast?

The species Homo sapiens — clearly our most-loved species, at the expense of nearly all others — has occupied Earth at a temperature somewhere between 2.2 and 3.2 C above baseline (i.e., relative to ~1750). We’ve also survived ice ages, which are characterized by a global-average temperature a few degrees below baseline.

Our species has occupied this planet for about 200,000 years. Our human predecessors were here about 6 million years ago. As with every other species, ours requires habitat to persist. As is the case with non-human species, habitat for Homo sapiens has persisted at a global-average temperature within a narrow range, from about 12 C to about 17 C.

The following calculations include only global dimming and the two self-reinforcing feedback loops for which estimates of heating are available. This analysis assumes moistening of the upper troposphere produces heating at a pace similar to methane. In fact, equilibrium is achieved between moistening of the upper troposphere and global-average temperature within days or weeks. As a result, this analysis is conservative.

The remaining feedback loops remain a mystery in terms of their potential for warming the planet. But I can assure you we will continue to hear the phrase, “faster than expected.” 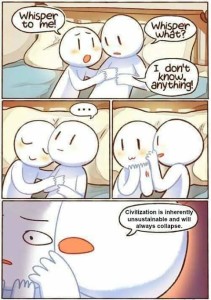 I’ll start with global dimming because industrial civilization cannot be maintained. Therefore, it will not be maintained. Even a child is able to understand this point … unless the child happens to exhibit behavior consistent with that of a privileged, Caucasian man.

Global dimming results from industrial activity, as indicated here. Earth will warm by 1 to 3 C degrees above today’s temperature within days or weeks after completion of the ongoing collapse of industrial civilization.

Moistening of the upper troposphere adds 1 to 3 additional degrees. I describe this phenomenon as item 39 on this list.

The monster, though, is atmospheric methane. A potent greenhouse gas, methane leaking emanating from the Arctic Ocean alone is likely to add between 5 and 11 degrees of warming within one or two decades. So said Paul Beckwith in November 2014 as he prepared to attend COP-20 in Lima, Peru. The paleo-climatic evidence supports this view. Please note that human extinction is likely to be triggered even if the exponential rise in atmospheric methane doesn’t matter, as explained here, but methane is a misbehaving bull in a fully stocked China shop. And I’m ignoring methane emanating from terrestrial permafrost.

Currently, Earth is more than 1 C above its baseline temperature. The 1 C mark was the absolute upper Rubicon beyond which we could not cross, as pointed out by the Advisory Group on Greenhouse Gases in October 1990. According to David Spratt, 0.5 C was the significant threshold. Unfortunately, I doubt anybody suspected the rate of climate change was outstripping the adaptive response by 10,000 times back in October 1990, as we now know from research focused on vertebrates.

Madly, as if poisoned by our own culture, we negotiate. The 1.5 C “target” produced by COP-21 in Paris was eclipsed a month after the ink dried on the vaunted agreement. Unlike us, nature does not negotiate. Rather, nature bats last.

On, then, to the simple addition, rounding down in every case (i.e., taking a conservative approach):

1. The most-rapid scenario starts with the current 1 C above baseline and adds about 3 C from loss of global dimming plus 1 degree from moistening of the upper troposphere (to avoid counting the feedbacks twice), plus 11 C from Arctic methane, for a total of 16 C above the 1750 baseline by November 2024. That’ll be inconvenient, as it is much warmer than Earth’s global-average temperature at any time during at least the last 2 billion years (i.e., 2,000,000,000 years). The loss of global dimming is guaranteed by the temperature rise resulting from moistening of the upper troposphere or the rise in atmospheric methane. Civilization will not persist beyond 2 C above baseline, which translates to at least twice that temperature rise within the interior of large continents where grains are grown (thus sustaining civilization)

2. At the slower end of the abrupt-climate-change spectrum is 1 C currently, plus 1 C from loss of global dimming, plus 1 degree from moistening of the upper troposphere, plus 5 C from Arctic methane, for a total of 8 C above the 1750 baseline by November 2034. As above, the loss of global dimming is guaranteed by the temperature rise resulting from moistening of the upper troposphere or the rise in atmospheric methane. 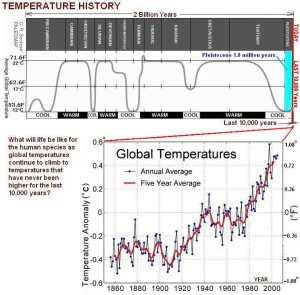 Even excluding a few dozen self-reinforcing feedback loops, is there any doubt either version of abrupt climate change will remove all habitat for our species in the very near future? If so, please share the attendant evidence.

Oh, and I still don’t know your expiration date. Or mine. But I’m certain each of us will die, even those of us who are middle-aged, Caucasian men in the global north.