Edge of Extinction: They Can Jump, But They Can’t Jump Rope

According to a story in the 7 June 2016 issue of the Washington Post, quoting the director of the U.S. National Snow and Ice Data Center, the 2016 Arctic melt season is a month ahead of 2012. The figure below speaks volumes. 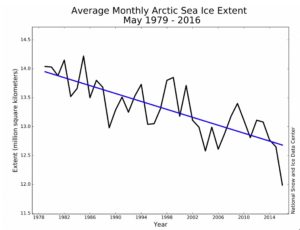