The Politics and Science of Our Demise

August 1, 2016
“Extinction is the rule. Survival is the exception.”
~ Carl Sagan

No mainstream scientist could talk about near-term human extinction and remain supported in his or her job. Therefore, none do. None go the distance in connecting the dots regarding our imminent demise. Paradoxically, tenure is designed to protect academic freedom. Administrators walk a tightrope as they promote the insanity of the dominant paradigm in the name of money while simultaneously paying lip service to academic freedom.

As with my personal life, I took a radical approach in my classrooms for a very long time. In return, my final department head was hired specifically to make my life miserable enough that I’d leave. After all, it’s nearly impossible to fire a tenured full professor with the record I had established. To be clear to my detractors, for about the thousandth time, I left active service voluntarily because I was unwilling to continue my participation within an irredeemably corrupt system.

My forthcoming Cascadian speaking tour will focus on the politics and science of abrupt climate change. I will tell a few stories about the politics underlying the scientific endeavor and then focus on Sam Carana’s recent analysis. The latter, in which Carana ponders a global-average temperature rise of more than 10 C above baseline within a decade, is the focus of this brief essay. Evidence underlying this essay can be found, as usual, within the long, often-updated climate-change summary and update.

The evidence is real, regardless who uncovers it. Carana probably is anonymous people. S/he makes mistakes, like everybody else, but his/her lack of public credentials does not obviate his/her findings. But I repeat myself. 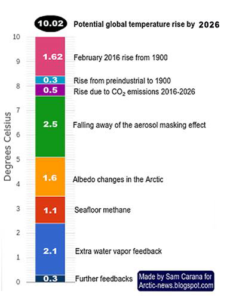 Carana’s analysis is good. S/he is able and willing to connect a few dots on the topic within the arena of abrupt climate change. The resulting analysis is generally quite conservative, although I believe s/he errs on the side of overheating at least once. In a questionable case, s/he concludes global-average temperature has increased 1.92 C since 1750. Although a recent paper indicates direct observations have missed about 20% of global warming since the 1860s, I will low-ball the scientific consensus in going with 1.6 C so far. A second situation, mentioned below, is more substantive and it matches one I made on a recent speaking tour with respect to moistening of the upper troposphere.

Removal of the aerosol masking effect, or “global dimming,” adds an additional 2.5 C. It’s guaranteed by high, unstable temperatures that preclude large-scale production of grains. The latest journal literature concludes the addition will be up to about 3 C, but I’ll take the ultra-conservative approach and side with Carana on this one.

According to Carana’s analysis, seafloor methane adds only 1.1 C between now and 2026. This figure is stunningly conservative relative to predictions by Natalia Shakhova and Paul Beckwith. Therefore, I’ll use the conservative figure.

Carana adds 2.1 C for extra water-vapor feedback. In doing so, s/he is concluding that essentially all the rise in temperature between 1750 and 2016 is due to carbon dioxide and will be matched by a similar rise in temperature because of water vapor in the near future. A more conservative approach pins the carbon dioxide contribution to 0.8 C, and therefore reduces the water-vapor feedback to 0.8 C. There will be an additional 0.5 C added in a decade, as indicated above. Thus, I’ll subtract 0.8 C off Carana’s projected water-vapor contribution.

Finally, Carana adds 0.3 C for other feedbacks. Considering the latest information about terrestrial permafrost and more than five dozen other self-reinforcing feedback loops, this figure seems startlingly conservative. Therefore, I will use it.

Habitat for humans on Earth is rapidly diminishing. Wishful thinking aside, cleverness aside, self-proclaimed intelligence aside, human animals will not persist long without habitat. Abrupt climate change has barely begun and the Sixth Mass Extinction is clearly under way. Afflicted by the arrogance of humanism, many members of my species believe the concept of habitat is applicable to other species, but not ours.

In total, Carana ends up with 10.02 C above baseline by mid-2026, or about 23.5 C. That’d be the highest global-average temperature on this planet during the last 2,000,000,000 years. Taking a conservative approach at every step, I conclude “only” an 8.71-degree rise in temperature by mid-2026. As a result, I conclude global-average temperature at that time will be about 22.2 C (13.5 C + 8.71 C). This is barely above 22 C, the temperature at which Earth has most commonly found itself during the last 2,000,000,000 years. I suspect it’s more likely, based on the conservative journal literature, that Earth will hit about 23 C in a decade. There is no reason to expect Earth to start cooling until the heat engine of civilization is turned off and dozens of self-reinforcing feedback loops are inexplicably reversed.

For context, the Great Dying wiped out nearly all complex life on Earth. It involved a global-average rise in temperature from about 12 C to about 23 C during a span of several hundred or a few tens of thousands of years. To conclude that humans will survive a similar rise in temperature within only a couple hundred years, with the vast majority of the heating occurring within a decade, is exceedingly — and probably insanely — optimistic. Considering Homo sapiens is strongly dependent upon myriad other species for our own survival, it’s difficult to imagine our favorite species will have the habitat requisite for survival as we barrel into 2026, only a decade from now.

But perhaps we will survive. Perhaps the heat engine known as civilization will be repaired by soon-to-be-developed “tools that cool” created — of course — via the heat engine known as civilization. Perhaps we can bomb the deserts and roam the ocean in nuclear submarines while eating Soylent Green. And then, a few million years later, assuming the planet cools, perhaps we will pop out the other side of a substantial bottleneck in sufficient numbers to do it all over again. Between now and then, I fully expect 10,000 trolls will emerge from beneath 10,000 bridges to claim I’m an extremist making up the notion of near-term human extinction as a means of generating income for myself.

Unicorns and other miracles notwithstanding, our persistence would surprise me. I’m preternaturally inclined toward reality instead of wishful thinking. Perhaps that’s my problem: I simply don’t wish hard enough.