February 2, 2017
Life begins at the end of your comfort zone

As indicated in a recent essay in this space, I moved to Central America in mid-2016. I drove along the eastern, Gulf coast of Mexico as part of a small caravan. Had I been one of the young men with guns I met along the way, I doubt I’d have been so kind to a wealthy looking Caucasian man from the United States. I appreciate the kindness and humor I encountered along the journey.

I’ve been in Belize long enough to form a few impressions, which I’ll share. And this essay responds to questions generated by my previous writing. I’ll start with the latter.

I am capable of critical thought and I’m not paranoid (even if I were, I’d still have enemies). It’s clear to me, based on ample evidence, that my departure from university life was engendered by the dark underbelly of the United States known variably as the Deep State, the Surveillance/Security State, and the Central Intelligence Agency. I left my paid position under my own power. No university would be able to force the departure of a tenured full professor with my credentials. But the Deep State worked with members of the university administration to reduce my ability to pursue my passion, which therefore encouraged and accelerated my departure. My radicalism, particularly with respect to the modeling and promotion of anarchism, made me a target of the federal government. As one consequence, I’ll never be able to work for pay again doing the work I love. Not in the country of my birth. And, because the Deep State has extensive tentacles, not on planet Earth.

Let’s go back a bit. The ancient philosophers have inspired and radicalized me. They were instrumental in shaping my path. Signs of my radicalism were apparent in my teen years. Nonetheless, as with most people in this culture, I was largely lost, philosophically, through my teen years and beyond. Then I discovered the ancients. I read, studied, pondered, and ultimately found myself via the ancients. When I write about “finding myself,” I am referring to my existential anchor. I became comfortable in my own skin. In my experience, few people are capable of achieving such comfort. I also threw off some of the shackles of culture, including those involving “unmentionable” topics such as money, death, sex, and bodily functions. For example, I realized that money is no indicator of success, and celebrity status in a society that values money over life is no path to personal comfort.

I’m a scientist and a teacher. I know my work does not appeal to irrational people uninterested in learning. The evidence regarding our near-term demise is clear, and fearful people, paid trolls, mainstream media personalities, ignoramuses, and idiots will continue to project animus as they operate in an evidence-free zone. I can’t control this behavior, nor will I try.

I will continue my unpaid work. I’ll continue to whittle away at my limited money to inform as many people as I’m able about the predicaments in which we are embedded. Belize is hardly the ideal location from which to continue my work, primarily because of the terrible telecommunications infrastructure. And it’ll do, until it doesn’t. It’s a wonderful place to live and it’s also a nice place to partake of the discussion nobody else will have. If you are interested in visiting me, please remember that you might be on vacation, but I work daily as part of an active homestead.

The native people in Belize are financially poor due to manipulation of the economy. They work to live, the exact opposite approach pursued so long by me and many other people in the “first” world. In my limited experience, they are universally strong, tough, compassionate, and sweet. I’m sure there are exceptions. I’m not seeking them out. To a great extent, a person gets what s/he gives.

In sharp contrast to the typical Belizean are the typical former friends, co-workers, and colleagues of mine. The latter people have concluded I was manipulated by sex and money to move out of the United States. Like most folks within a culture gone mad, they are motivated by power, as exemplified by money, and therefore cannot imagine I’d move for other reasons. Love and empathy are in short supply and certainly don’t make the conventional list of legitimate reasons to relocate.

Meanwhile, the woman who generously allows me to occupy her property in the Mayan Mountains often hears that I have fear-mongered her into moving here. Apparently neither of us is capable of a single independent thought, and we’ve both moved here against our wishes. Fortunately for us, misery loves company — especially miserable company — which leaves us loving the pathetic company of ourselves and the downtrodden Belizeans.

That last sentence was an attempt at levity. It’s clearly necessary for me to point out the joke every time, lest my mean-spirited detractors turn the joke on me. 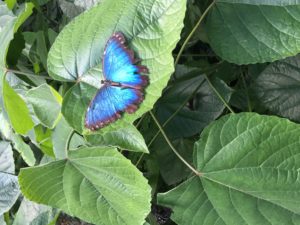 Belize is hot, humid, and beautiful. The flora and fauna are excitingly new to me. The natives, particularly in the nearby Mayan villages where I spend much of my time, are wonderfully attuned to nature’s bounty. They know the seasons and the response of ecosystems to the seasons. They know which plants will alleviate which pains. They know life is short. They act accordingly. I’m trying to follow their lead.

In the spirit of throwing off cultural shackles, I continue to ponder my own death as a means of living with urgency. The fact that my body is covered with insect bites encourages my thinking about death via Zika, dengue, and malaria. If I have a choice, which seems unlikely, I’ll have my body envelope torn merely to break another taboo on my way out. I’d rather die between a jaguar’s jaws than from a mundane, albeit toxic blend of bugginess.

In short, I live and work in Belize. My learning and my teachings continue to extend far beyond my humble dwelling.

McPherson’s latest book is available in audio, and can be purchased here. Ms. Ladybug and Mr. Honeybee: A Love Story at the End of Time is intended for ages 11 and up.