The Faster You Go, the Sooner You’re Done

March 13, 2017
Civilization, like an airplane in flight, survives only as it keeps going forward

My interpretation of Cactus Ed’s line: Must go faster. This is a defining element of every civilization, including the current, industrialized version. Civilizations don’t grow or die. They grow and die.

Growth is deemed necessary for this set of living arrangements. More is better, for cancer, civilizations, and the cancerous growth of industrial (sic) civilization (sic). The only quality worthy of mention is quantity. Everything, every thing, must be monetized. Grinding the living planet into dust is collateral damage for growth. The good of growth, like that of greed, is rarely questioned.

Every civilization reaches its end. In every case, the end is a surprise for most of the inhabitants. In most documented cases, a few individuals sounded the alarm as the proverbial ship was sinking. These people were punished or ignored.

Every species reaches its end. In every case, the last member of a species is unaware it is the final version. We are the only species known to be aware of our demise at the level of a species. The few individuals sounding the alarm have been ignored, insulted, or punished.

Imagine the life’s work shattered. Imagine it gone awry. Imagine it wounded, and then dead.

Imagine the life’s work miscarried. No, worse: intentionally aborted by a homicidal maniac. Expecting more from a willfully ignorant populace blinded by greed is wishful thinking of the lowest order.

Now you’re coming close to my world. It’s a world dominated by reason and attacked without cause. For example, I tend to seek evidence from field researchers rather than from office-bound modelers and graduate students who rarely venture far from the city sidewalk. The latter people are quick to offer opinions unsupported by evidence. In contrast, my life as a field ecologist predisposes me toward an understanding of the natural world and away from fantasy technology.

It’s not as if I am a failure in the academic world. I was acknowledged in my home college as an A+ Advisor my third year on campus, and I suspect I’m the only person ever honored with the highest award given by each of the two transdisciplinary colleges at the University of Arizona (Graduate College 2002, Honors College 2009). I am one of the very few people in history to achieve the status of full professor before turning 40 years of age. My lengthy resume is replete with scholarly publications, including dozens of refereed journal articles (the “gold standard” by which the process of science creates reliable knowledge).

Seeing a single paper through the publication process requires talent and persistence. Essentially none of my critics have accomplished this task. Collating and synthesizing evidence in the form of a book is beyond even most academics, especially in the natural sciences. My scholarly efforts have produced more than a dozen books.

But, alas. The older I am, the better I was. I’d guess that’s the usual condition for people as they’re looking back, grasping for meaning or long-lost glory. My perspective on honors is inspired by and similar to that of Ed Abbey, although I’ve never been offered a substantive monetary award. 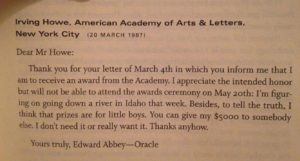 I’m not interested in Meaning derived from external sources. Life has only the meanings we assign it, and I’m comfortable with the meanings of my life. As a result, I’m comfortable in my own skin, a rare experience in this culture. Furthermore, past glory is just that: past. 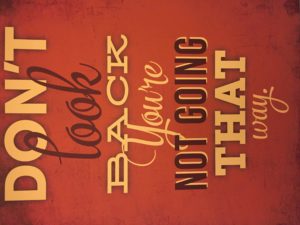 Now I live for today, rather than in the past of my faulty memories or for the tomorrow that never comes. Call me a slow learner in a culture of must go faster. The speed of life, which often approaches the speed of light, is sufficiently exhilarating for me. Finally I recognize that going faster is hazardous to non-human life and that it offers few rewards that matter (at least to me).