Why Am I Here?

March 23, 2017
I would rather die of passion than of boredom

When asked why we are here, the inimitable American author Kurt Vonnegut frequently quoted his son Mark and also his uncle. The former individual, between stints in a psyche ward and Harvard Medical School — and apparently those were two different facilities — Mark Vonnegut answered, “We are here to help each other through this, whatever this is.” According to Kurt Vonnegut, his uncle said, “We are here to fart around, and don’t let anybody tell you any different.”

I agree with both of Kurt Vonnegut’s sources. Committed as I am to a life of service, I strongly support the perspective expressed so eloquently by Mark Vonnegut. At least for me, any other life is pointless. If I cannot serve humans and the rest of the living planet, then my life has no purpose.

Inspired as I am by the absurdist philosopher Camus, I cannot fault Kurt Vonnegut’s uncle. When I am unable to have fun on a daily basis, including the ability to poke fun at the culture into which I was born, it’s time for me to go. For the many people who have recommended my early exit, the terminus of my fun-filled adventures will be a happy day. Even my death will bring giggles of joy. That, for me, epitomizes a service-filled life.

Recognizing that all is impermanent and still finding meanings in an amoral, meaningless universe have been guides along my path to a life replete with simple pleasures. Introspection has been pivotal at every turn.

In the absence of intrapersonal intelligence, hence the inability to ponder one’s purpose in a confusing and complicated world, many people seek external validation and acceptance from a culture gone mad. This leads, quite unnaturally, to money as gawd and introspection as a waste of time and cognition. Thus are many people led to believe postmodern palaver such as truth is personal, with the obvious and obviously ludicrous conclusion that there are as many versions of the truth as there are people. Forsaking personal responsibility is a clear next step. Dependence upon an irredeemably corrupt system is thereby strengthened. 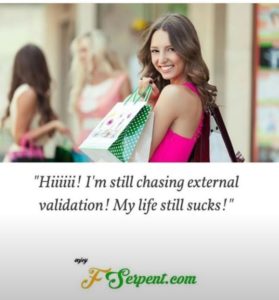 Voila! The perfect storm of idiotic consumerism is created within a purposely dumbed-down society. The rich get richer. The poor become increasingly ignorant and stupid, and insanely continue to support an insane set of living arrangements. One consequence: The lies my culture told me — and still tell me — gain additional traction every day.

I’m no longer playing that game. I’ve been describing an omnicidal culture for decades and actively attempting to distance myself from the “civilized” life for ten years. Notwithstanding my failed attempts to date, I continue to seek my life’s meanings liberated from the shackles of a culture from which I cannot escape.

I am passionately pursuing a life of excellence even as I rediscover and reinvent what this means for me. Your mileage may vary. I’ve no doubt it does, considering the personal nature of excellence, meaning, and love.

I am here. Please join me.