August 23, 2017
If you lay with a scorpion, don’t be surprised when it finally stings you

As if I didn’t see that one coming. I’ve been uninvited, with prejudice, from the panel on which I was asked to serve at 2017 annual meeting of the American Geological Society. Chalk up another one for Michael Mann and the dominant culture.

I was invited to deliver a presentation at the meeting by the organizers of a panel focused on abrupt climate change. I accepted, I paid to have my presentation considered, I submitted an abstract, and I rearranged my tour schedule accordingly. The abstract I submitted on 30 June 2017 appears below. 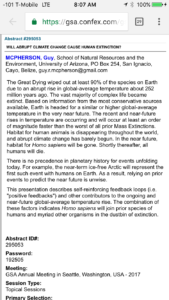 The abstract is innocuous. My presentation would have focused tightly on evidence, as would be appropriate for the annual meeting of a scientific society. The responses from one of the two organizers of the session in which I’d be presenting were promising: “We are very excited that Dr. McPherson will be presenting in our session-it will be a highlight of the meeting.” And then, a few days later, on 20 July 2017: “Looks like everything went through for the submission–we look forward to your thought-provoking talk. I do agree that the trend in temperatures and extinctions is alarming (to say the least). I do wonder if the wealthy people/nations will persist. The outlook is grim for poor populations. I also wonder if we can put any numbers on how long this will take.”

Apparently it took a while for the impact of David Wallace-Wells’s 7,300-word essay in New York magazine to be fully realized. Wells’s essay, Professor Michael Mann’s evidence-free responses, and my comments are described here. The following information appeared in my email inbox on 29 July 2017:

I do want to make it clear that the point of this session is to provide insight into how scientists might best engage and understand the policy surrounding climate change.

Dr. McPherson’s recent blog post: https://guymcpherson.com/2017/07/oh-mann/ makes it clear that he is interested in using our session as a platform to debate with Mike Mann. This is clearly outside the scope of this session and would be extremely counterproductive to making progress to move towards climate solutions.

My response, submitted to the session organizers the very same day:

1. David Wallace-Wells wrote his 7,300-word essay. It did not mention my name.

2. Michael Mann launched an unprovoked attack on my character. He resorted to name-calling and he also accused me of making a ludicrous statement I’ve never made.

3. I defended myself via essay. I asked Mann and the Washington Post to make corrections. I’ve heard from neither of them.

4. The grapevine suggests I’ll be uninvited from the panel. Thus this message.

I am NOT interested in a debate with Dr. Mann. I am interested in the science of abrupt climate change, regardless where it leads.

Dr. Mann has purposely misstated facts regarding evidence. I intend to point out the actual evidence underlying abrupt climate change without disparaging Dr. Mann. I doubt he will extend the same courtesy to me, however, based upon his recent writing.

I’d like to believe we can pursue a professional outcome rooted in the facts. What would you like from me to make that happen?

Finally, the entire situation was resolved when I received the following message on 23 August 2017:

Dear Dr. McPherson,
Thank you for your interest in our our session at GSA and for submitting an abstract to our session.

I believe you have been accepted to the general session, but not to our session.

I do want to make it clear that the point of this session is to provide insight into how scientists might best engage and understand the policy surrounding climate change.
In your recent blog post:

These statements make it clear that you are interested in using our session as a platform to debate with Mike Mann. This is clearly outside the scope of this session and would be extremely counterproductive to making progress to move towards climate solutions.

Apparently reading comprehension is poor. How many times must I point out I’m interested in facts, not a debate?

Relevant evidence is hidden from the public every day. Governments and media are particularly complicit. The example articulated here indicates the power of the dominant cultural narrative over scientific bodies as well as the conventional mouthpieces of imperialism. Once upon a time, a very long time ago, this would have surprised me. Fortunately, I’m no longer so naive. Unfortunately, the cost has been high, and it has included my idealistic faith in humanity.