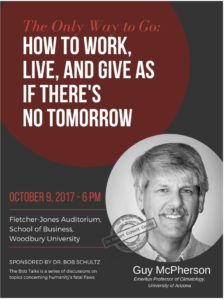 I’m stunned the system known as industrial civilization is still sufficiently intact to allow air travel. As a result, I’m pleasantly surprised I’m still alive. Contrary to the lies and wishes of my detractors, I’ve not predicted otherwise. Pondering an idea is not predicting it, even when I use strong language as I ponder. And I’ve churned this terrain a few dozen times. I’ve no doubt ignorance will continue to prevail.

The Arctic is not yet ice-free, contrary to the 2012 analysis predicting an ice-free Arctic Ocean in 2016 plus or minus 3 years as well as the fragility of the ice during the summer of 2017. Refreezing began this September earlier than expected. As recently pointed out by the president of Finland in the White House, “if we lose the Arctic, we lose the globe.” Humans have dodged five bullets in as many years. I doubt the trend continues much longer. And, no, there will not be a human on Earth in 2026.

Living with urgency is a valid alternative to accepting the ridiculously customary infinite-growth paradigm. Reading comprehension is unsurprisingly poor in a system characterized by dumbing down and willful ignorance. I’ll soon attempt, yet again, to swim against the cultural tide.

I am scheduled to deliver the Inaugural Schultz Awareness Lecture on 9 October 2017 at 6:00 p.m. Pacific time. The venue is the Fletcher-Jones Auditorium at Woodbury University, 7500 Glenoaks Boulevard, Burbank, California.

I’ll arrive a day or two before the lecture and stay in the area a couple days after. Please let me know if you’d like to get together for a conversation or a meal: guy.r.mcpherson@gmail.com

I’m featured in a video series that airs now and then. Catch all released episodes of the Guy, Fawkes, and Jamen show here.

I’ve received recent requests for a workshop focused on emotions for people who accept the evidence underlying our near-term demise. Such a workshop is described here. It is available at the homestead I occupy in Belize.

McPherson’s latest book is available in audio, and can be purchased here. Ms. Ladybug and Mr. Honeybee: A Love Story at the End of Time is intended for ages 11 and up.