November 19, 2017
… If I let myself believe anything on insufficient evidence, there may be no great harm done by the mere belief; it may be true after all, or I may never have occasion to exhibit it in outward acts. But I cannot help doing this great wrong towards Man, that I make myself credulous. The danger to society is not merely that it should believe wrong things, though that is great enough; but that it should become credulous, and lose the habit of testing things and inquiring into them; for then it must sink back into savagery.
~ William Kingdon Clifford

Industrial civilization is the very definition of savagery. This culture is characterized by savagery just as clearly, for those few willing to see, as the culture is exemplified by widespread acceptance of insufficient evidence. The savagery resulting from purposeful lies recently has affected me on a personal level. As a result, it has impacted my ongoing work as a professional (albeit unpaid).

I’ve posted two previous essays in this space on the topic of the recent betrayals against me: “The Art of Betrayal” and “All’s Fair … ?”. Some readers have sought additional evidence of illegal activity, either because they are critical thinkers or because they are too stupid to connect a few dots. I respond below with embedded PDF versions of the letters sent to some offenders, as well as additional information. I’m avoiding redundancy by excluding letters to some of the guilty parties, all of whom refuse to engage with me and also with relevant evidence. They would clearly rather see me murdered than themselves engage with facts. The list of liars and lawbreakers so far includes Serena Marie Raphael McPherson (no known relation), Carolyn Baker, Derrick Jensen, Michael Jon Sliwa, Cory Morningstar, Luke Orsborne, Forrest Palmer, Lierre Keith, Nicole Foss, Keith Harmon Snow, and doubtless many others who have adopted and promulgated nonsensical, evidence-free writings as factual.

How far will these people go on the path to character assassination? This morning I learned Keith Harmon Snow accused a woman I have never met of having an affair with me. Apparently Snow, who claims to be a journalist, knows more about us than we do. Or maybe he is just another patriarchal liar in a society characterized by lies. Will there be consequences for the lies of these people? We shall see.

On 9 September 2017 Keith Harmon Snow wrote me the following via email. Apparently, my evidence-rich response was insufficient, as he quickly sided with the liars:

When you visited my area in western mass a few years ago I was already pretty much on the same page about the imminent collapse. Well, with these storms bearing down on the US, and all that suggests, and all the other evidence, it’s not looking very pretty.

I’m writing to ask if you would like to offer your side of the story as regards what someone showed me posted in the “Statement” about you on the blog or web site Wrong Kind of Green.

I am accused, by these liars and their fans, of hypocrisy for seeking justice in an unjust world approaching the end of habitat for humans. I’m reminded of thoughts expressed by Thomas Aquinas: “He who is not angry when there is just cause for anger is immoral. Why? Because anger looks to the good of justice. And if you can live amid injustice without anger, you are immoral as well as unjust.”

I am by no means suggesting anybody on the list of liars is moral. Each of them gave up on justice the instant they put fingers to keyboard after knowing the facts in this case. If they’re not being paid to defame me, then they are wasting a prime opportunity.

If any of the guilty parties had evidence — and they clearly do not — you and I would know about it. My requests for evidence have been met with false stories supported by private messages Serena created (Serena’s favorite approach), in a perfect example of utterly classless behavior from deplorable people who counter the evidence I present with a smear campaign. I would be disgusted were it not for my experience with them, which has caused my disgust to be eclipsed by pity, sadness, and amusement as they thrash aimlessly within their existential and intellectual vacuums. Let’s peer into the evidence, beginning with a letter from Serena to me. Below the letter, I demonstrate how easy it is to create Facebook chats out of thin air, as has been done by Serena or somebody working on her behalf. 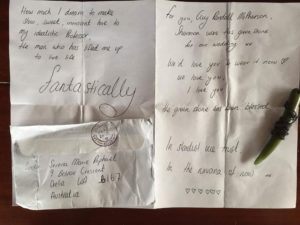 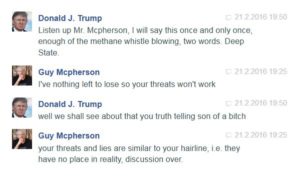 As expected, serial misanthropic liar Michael Jon Sliwa remains the worst of the horrible lot as he continues to spread information he knows to be false while dragging my beloved ex-wife’s name into the mess he helped create. Sliwa accepted and promulgated a skillfully created document from Serena as if it were factual even after he knew it misrepresented the facts. He lied, knowing he lied. There is no doubt.

Consistent with Clifford’s comment from 1884, I continue to pursue justice in this case in the ongoing defamation campaign against me. That the near-term demise of industrial civilization, followed soon after by the extinction of Homo sapiens likely will preclude justice is no excuse to give up. The inimitable Edward Abbey pointed out, some hundred years after Clifford, “better a cruel truth than a comfortable delusion.” My detractors would have you believe otherwise.

These attempts at character assassination have nothing to do with evidence. The evidence is clear: All humans will soon be dead.

I will continue to play the fool in pursuing and promoting evidence, excellence, and love. The clever ones know and avoid my folly in a culture characterized by lies, mediocrity, and indifference. After all, it is generally easier to do wrong than to do right. Color me a stubborn, slow learner. That I can look myself in the mirror without embarrassment is small consolation. I cannot imagine the cast of deplorables in this case being similarly at peace with the reflections they face.

Nearly three years after I wrote and posted this essay, I was interviewed about the topic by journalist extraordinaire Jamarl Thomas. Our recorded conversation is archived here.

Same-day update: In response to this essay, Colby Smith (who I’ve never met) says it well. Her reaction to the essay exhibits relevant anger and confusion at the pitiful characters defaming me:

I am blown away that these slanderers and vilifiers are still at it with such venom. It’s mad. I don’t follow this bizarre saga on the edge of my seat, but I pick up bits and bobs when I drop in intending to read articles … occasionally I follow a link or look up some schmuck’s name, and occasionally read something written by one of the Prof’s defamers … what blows my mind is that Guy has been forced to hang out his intimate washing (clearly Pauline to a degree as well) for public scrutiny and no one seems to think that this is unacceptable. Some of the things that have come out are a person’s most private treasures — those things someone does or fantasizes about doing with consenting adults in PRIVACY, and now they are neatly laid out for us to pick through … so we are invited to wonder about, to argue the ethics of, laugh at, scoff, be amused by, and ponder things that Guy (and Pauline) never would have invited us to know about their lives in the first place. That is certainly a place where consent ended dead in its tracks, but the people who are aggressively forcing this non-consensual exposure of the most intimate aspects of their lives are not being handled as aggressors, but instead are being allowed to hide behind the masks of victims or noble defenders. To me this is a massive breech of trust and ethics. You shouldn’t be forced to defend yourself against unfounded/unproven allegations by having to publicly strip down to your socks and bend over for everyone. 😕