December 17, 2017
In order for the light to shine so brightly, the darkness must be present

Some readers have informed me that my essays must stick to climate science. According to this perspective, my personal life is not worth reading about, hence not worth writing about. Others of course feel similarly about my work on abrupt climate change leading to near-term human extinction. I rarely waterboard an unsuspecting victim into reading anything I write, but on this occasion I’m providing a note of warning: What follows is a personal account, nearly devoid of evidence about abrupt climate change.

As regular followers of my work are aware, I recently visited Norway. The airfare was generously, accidentally provided by the attempted host and sponsor of my Australian tour when he withdrew support. The evidence-free smear campaign launched my way caused him to fearfully withdraw sponsorship after flexible airline tickets were purchased. Living my message led me on a chase for the northern lights, which I’d never seen. I’ll express a few thoughts as I depart the country this dark Sunday morning.

I know the environmental costs of air travel. I also know about global dimming, the topic few self-proclaimed authorities refuse to acknowledge. Please keep your judgment to yourself.

The trip was an overwhelming success. Aurora borealis spectacularly swirled and shimmied from horizon to horizon. The ten people in my first-night tour group were treated to a multicolored, all-night show. Even though I’m chromatically challenged, the celestial show was impressive.

The second night was canceled by a snowstorm. The final night found us viewing great lights again, this time beneath the sparkling Geminid meteor shower. 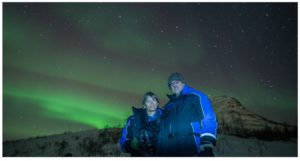 The return to my Scandahoovian roots — as my mom would jokingly say — attracted the kind of animus I’ve come to expect from people who would prefer I become as miserable as they are. Sadly for them, those days are long behind me. I no longer use the expectations of others as a means of entrapment. 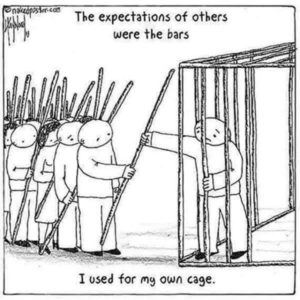 As usual, I volunteered my time to meet with anybody who desired on my first and likely last trip to Norway. This is known as generosity. Many people, unfamiliar with the concept, confuse it with seeking status.

As usual, my generosity was countered with selfishness and hatred. My attempt to serve as a rare “leaver” in the spirit of American writer Daniel Quinn was abundantly greeted with Quinn’s commonplace “takers.”

Emblematic of my generosity, I agreed to have lunch with anybody who desired. Almost immediately, I was attacked by anonymous trolls claiming I would use the opportunity to extract meal money out of unsuspecting “fans.”

I’m the most generous person I know with respect to money and time. I have given away nearly all that hasn’t been taken from me.

Whereas I’m not averse to dining at the expense of somebody who wants to converse with me, I don’t charge for the experience. People far less knowledgeable and interesting than me charge $500 US per hour to chat on the telephone. Dining surely costs even more! In contrast, I’ve been practicing a “gift economy” in a world dominated by takers so long I’ve barely a dime to my name. Such is the outcome one can expect in response to generosity in a culture of colonization.

A visiting Catalonian selected the venue. My partner and I arrived at the appointed time and place to enjoy the delightful company of new companions from Norway, Spain, and England.

Good news: Seven of us enjoyed the meal and conversation. More good news: One of the seven generously picked up the tab.

Bad news, at least for the jealous trolls: I’ll not reveal which one. More bad news: We’re leaving Norway this morning.

I’d like to report that I will reflect positively on the entire Norwegian experience in the years to come. For better and worse, I don’t have years ahead of me.