Belize in the Rear-View Mirror

October 20, 2018
Adventure must start with running away from home
~ William Bolitho

As an undeclared colony of the United States, Belize shares much in common with the country of my birth. For example, the U.S. Central Intelligence Agency (CIA) carries out much illicit activity on behalf of the big banks in the U.S. It didn’t take me long to realize the region dominated by mechanized Mennonites, known locally as “Moneynites,” serves as a Central American hub for the CIA to run drugs, guns, and money. Rumor has lots of CIA agents retiring in Belize, perhaps in part because of the poor telecommunications infrastructure. That Belize is the only Central American country with English as the official language probably doesn’t hurt.

I will miss Belize and much that it offers. I’ll likely visit again briefly, as allowed by the continuation of civilization.

I will miss the permaculture paradise on which I lived for 27 months. I contributed to the development of a beautiful property, now for sale at a bargain price because I am supporting my partner’s desire to live near her adult children.

I will miss the simplicity of the 1960s in the U.S., a simplicity that still exists in Belize. I was among the children playing in the streets. Mine was among the families sharing meals. I had familiar neighbors, many of them friends. All these attributes are present in western Belize.

I will miss the beautifully verdant, biologically rich jungle. Never before have I identified so closely with William Blake’s poem, “Auguries of Innocence.” Belize encouraged me to “Hold Infinity in the palm of [my] hand, And Eternity in an hour.” 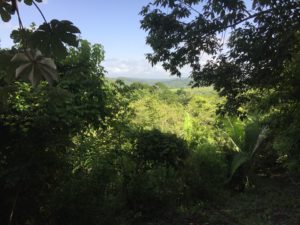 I will miss the nightly ratcheting of the cicadas, loud but not quite loud enough to overwhelm the roar of the howler monkeys. I will miss the occasional stomping of a tapir out my bedroom window.

I will miss the daytime cacophony of birds, many of them new to me. Flocks of green parrots, families of trogons, and pairs of toucans top the list of regular sightings.

I will miss the year-around sight of fruits on trees, along with their taste as fruit and juice. Some were new to me, others were not: custard apple, star apple, velvet apple, mammee, mango, guava, and many more.

I will not miss artillery ranges for the U.S. Air Force classified as highways. Never again will I take for granted a paved road.

I will not miss the irritating pests inhabiting the jungle solely to chew human flesh. Their variety is legion, their persistence Hellish.

I will not miss forgoing medical insurance (cf. health care). A serious injury or illness likely would have killed me in Belize. The same outcome is virtually certain in the U.S., albeit at considerably higher monetary cost and the delusion of comfort.

I will not miss the poor, expensive telecommunications infrastructure, as I mentioned in a previous essay. Spending ca. $150 USD for each audio interview as a result of driving to and dining at a lodge has been the ruin of my already small checking account.

Last, and certainly not least, I will not miss the product passed off as “ice cream” in Belize. The country is home to the worst ice cream I’ve ever tasted. “Moneynites” have a near-monopoly on the country’s dairy industry. I’m already catching up on 27 months of irregular access to ice cream high in fat and flavor.

I lived offgrid for a decade. During that time, and before, I made sacrifices unimaginable for most people These efforts failed to ward off abrupt climate change and the Sixth Mass Extinction in Earth. I will nonetheless continue my unpaid work as long as allowed by the continuation of industrial civilization.