In a video dated 11 June 2018, I indicated collapse of civilization was likely early this autumn. I clarified in a follow-up video. My video releases represented neither predictions nor projections, contrary to the ignorant beliefs of the masses on the Troll Farm known as YouTube. Rather, they represented statements of probability.

Color me shocked. Civilization has weathered the highest global-average temperature experienced by Homo sapiens, about 1¾ C above the 1750 baseline marking the beginning of the industrial revolution. And we squeezed through a significant reduction in global wheat production relative to the preceding year (see figure below). 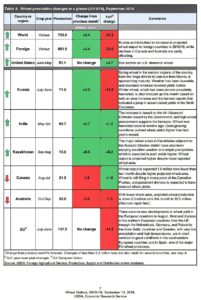 If industrial civilization continues to stay its wobbly course through November 2019, I will be proven incorrect about my “weeks to months” comment. The scientist in me claims detachment from the outcome of this prediction. Contrary to beliefs on the aforementioned Troll Farm, the humane human in me would be ecstatic, not disappointed, if industrial civilization persists more than another year. After all, I understand the notion of global dimming and its likely impacts, as well as the untoward outcome for unattended nuclear facilities. I’d be pleased to see the end of this November at this point, considering the ecological evidence and the geopolitical infernos sweeping the planet (Murica’s latest provocation of China is one example).

About global dimming, otherwise known as the aerosol masking effect: As little as a 35% reduction in industrial activity commits Earth to a rapid rise in global-average temperature almost certain to cause loss of habitat for humans within a period of about six weeks. And, as I’ve mentioned in this space repeatedly, one of the likely outcomes of such an occurrence will be the loss of habitat for humans on Earth, primarily because the rate of temperature increase is beyond that experienced by most species on Earth (none of whom are adapted to such a rapid change in habitat).

I like living, and I love life. Furthermore, I do not like any of the outcomes likely to result from the uncontrolled meltdown of the world’s nuclear power facilities as workers stop working because they no longer get paid, the grid fails, and the fuel no longer arrives at the filling stations.

Despite my previous inability to peer accurately into the future, I will continue to make predictions rooted in evidence. As astute readers know, predictions are necessary steps in the process of science.

In exchange for travel expenses, I will continue to tour with my message. Having received no income for more than nine years precludes traveling at my own expense.

Thanks to my all-volunteer booking team for seeking additional volunteers in support of my speaking tours. If you would like to host me in your area, please send me a message at guy.r.mcpherson@gmail.com

My latest book is available in audio, and can be purchased here. Ms. Ladybug and Mr. Honeybee: A Love Story at the End of Time is intended for ages 11 and up.