My Final Move (Round Four)

October 17, 2018
Life is a shipwreck but we must not forget to sing in the lifeboats
~ Voltaire

As of late last night, I live in Westchester County, about an hour north of New York City by automobile or train. In more than 58 years on Earth so far, I never imagined those words would be tapped onto my keyboard. Some surprises are better than others.

I’m pleasantly surprised I’m still here, long after I suspected abrupt climate change would send the grim reaper my way. Actually, I’m astonished I’m here at all, given the long odds of DNA within this universe. And, more to the point of this revelatory essay, I thought I’d die in each of the three previous places I lived.

Upon completing a leave of absence from university life in 2000, I returned to my professorial position in Tucson, Arizona from the Washington, D.C. metropolitan area. I’d served for a year as the inaugural director of the program that has become the premiere postdoctoral program on Earth. Tucson wasn’t great — it was a big city, after all, and the human population has expanded considerably since 2000 — but the university was a decent match to my professional skills and desires, Tucson was familiar, and moving really sucks. The transition from enormous metroplex to big city, with the latter surrounded by the Sonoran Desert, joyfully took me back to one of the most biologically rich places in North America.

The move to the Mud Hut in the wilds of southern, rural New Mexico was begun in August 2007 and was completed in May 2009 when I voluntarily left active service at the university. It represented a marital compromise and a transition from the biologically rich Sonoran Desert to the relatively impoverished grassland within the Chihuahuan Desert. The move was an attempt to demonstrate an off-grid alternative to living within industrial civilization. This teachable moment also illustrated one pathway to the transition-town ideal, as I’ve explained repeatedly in this space. Little did I know it was too late to head off abrupt climate change and the Sixth Mass Extinction. Now I know plenty about both phenomena, but my knowledge came too late to preserve the relationships left in the wake of selecting a path beyond the mainstream. In becoming the world’s leading authority on the topic of abrupt climate change leading to near-term human extinction, I learned a lot about betrayal during the initial years of my “retirement.” My education about betrayal and those who practice it continues, sadly.

Enter Exhibit 3, July 2016, Belize. I moved a couple miles east of downtown San Antonio, a Mayan village in the Cayo District. Now fully aware of the twin predicaments of abrupt climate change and the Sixth Mass Extinction, not to mention unencumbered by relationships once dear to me, I moved to the country of my choice. Belize had occupied that position for more than a decade when I moved there, for the variety of reasons I’ve described in this space. The 57-acre homestead I occupied for more than two years is for sale at a bargain price because the owner now lives in New York state. 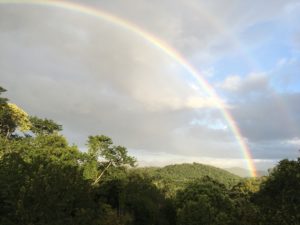 After the 27-month adventure of a lifetime in the Belizean jungle, I’m back in the country of my birth. As with my move from Tucson to New Mexico, my latest transition takes me away from a biologically rich area to an area considerably more impoverished from the perspective that matters most to me: life. Westchester County claims nearly three times as many residents as the nation I left behind, a country about the size of Massachusetts.

I love the Belizean jungle, in part because I didn’t spend 18-hour days with a pick and shovel, as I did at the Mud Hut. Wielding a keyboard is surely more dangerous than swinging a shovel, but the keyboard is easier on my aging body. Given the “McPherson paradox” underlaid by the aerosol masking effect, I’ve chosen the keyboard and my voice in my continued educational pursuits.

Living in western Belize allowed me to continue my work on three fronts: (1) speaking tours, (2) hosting Only Love Remains workshops at my home, and (3) hosting guests from around the globe for extended discussions about various topics. I will pursue similar endeavors from my new home in New York, with item (3) getting started with next week’s guests from South Carolina and Virginia, and item (1) to be accomplished by touring the Eastern Hemisphere early next month.

As with the move from one southwestern state to another a decade ago, my latest one is rooted in compromise. I’ve gone from a rural jungle to an urban zoo, for better and worse. I’ll not sacrifice a relationship dear to me over something as trivial as how and where I will turn the final pages in my personal diary.

For the last several years, I’ve believed it important to live in a rural area, in part to avoid the chaos likely to ensue as industrial civilization becomes less civilized. I’ve recently convinced myself that I will deal with the chaos calmly, largely because my response to chaos will be acceptance of my pain-filled fate with minimal suffering. We will all know, way too soon, how that works out for each of us, as individuals.

One advantage of living in New York is my ready access to technology difficult to find in Belize. One result is that I will join Kevin Hester as cohost of Nature Bats on the Progressive Radio Network, effective 6 November 2018. Another result will be increased availability for audio and video interviews as the Internet speed where I live increases by more than four orders of magnitude (and the expense declines by an order of magnitude). We will have a recording studio in about a month from today, and my partner is a professional videographer. Prospective, honest interviewers take note.

For those already passing judgment because my sacrificing everything except my integrity wasn’t enough in the “fight” against climate change or the battle with the Sixth Mass Extinction, I have no idea what you expect. I tried. I failed. Your half-hearted efforts paled in comparison with mine. They failed, too.

Because I know what’s happening in the world, the apartment I’m renting accepts visitors. If you’re interested in radical discussions rooted in evidence, please plan your visit, starting with an email message to me: guy.r.mcpherson@gmail.com.

Three major moves in less than two decades, convinced each was my last, has me circumspect about this fourth transition being my not-so-grand finale. May we all have time for my fifth transition, whether or not I pursue it.