This essay focuses on single-issue pursuits and those who pursue said issues at the expense of a holistic approach. Consider for example veganism, a topic about which I have written previously (and here, more recently). A relatively comprehensive assessment of veganism appears here. Lest the readers become confused, however, this essay is about far more than religiously hateful vegans who willingly kill bees in pursuit of almonds, although even USA Today admits veganism is a flawed approach that will fix nothing of significance (the same outlet has more and worse news here and here) and a vegan diet might reduce intelligence (for many reasons, explained here). Rather, this essay is about politics, activism, land management, “chemtrails,” and many other activities pursued with religious fervor by people intensely aware of one topic and stunningly ignorant of most others. Given my pursuit and promulgation of evidence about abrupt climate change, I realize I could be accused of pursuing a single issue at the expense of a holistic approach.

My previous writing about politics is included within many essays. As an anarchist, I will not spend more time on that topic with this essay.

My evidence-rich message is said to discourage activists from taking action. If this is the case, and I have seen no supporting evidence, then these so-called activists were never taking activism seriously.

My previous writing about management of lands and waters goes back to the earliest substantive essay in this space, and is included within many additional essays. As a result, I will not spend more time on that topic with this essay.

My previous writing about “chemtrails” is included within many essays in this space. The general idea is captured with this short post and the writing embedded within it. In other words, follow all the links for maximum evidence.

My previous writing in this space lacks a comprehensive assessment of diet, so I will use veganism as a foil for the remainder of this essay. As we have long known, any effort to “save the world,” cannot be rooted in veganism. After all, “if your concerns as a vegan are the environment, animal welfare and your own health, then it’s no longer possible to pretend that these are all met simply by giving up meat and dairy.” I eat very low on the food chain, and I avoid industrial meat like the plague it has become. And I know the world is beyond saving, whatever “saving the world” has come to mean. I also know even bees need meat. And we need bees.

It is clear that giving up meat will have little impact on climate change. More importantly, giving up meat will have no impact on abrupt, irreversible climate change. I know about taking right action, so I attempt to do so. Said right action rarely includes veganism. After all, veganism neglects the concept of habitat while claiming to “save” non-human animals (witness, for example, promoting the use of palm oil, which cruelly devastates habitat for non-human Great Apes). While hectoring meat-eaters will do nothing to slow abrupt climate change, it could well alienate members of the broader public. Such an approach is contrary to my own perspective, which is rooted in concepts such as “no shame” and “no blame” for a predicament that just as easily be blamed on each of us as it can be blamed on none of us.

Veganism is a privilege of civilization, one of many. It depends upon the destruction of wildlands to produce grains and nuts well beyond the case of palm oil. It is cherry picking of the first, and worst, order. In my decade living off-the-grid, I never encountered an off-grid vegan. Rather, every vegan I have ever known depended upon the just-in-time delivery system that is part and parcel of industrialized life. City life is a privileged life, as I know from experience. My youth was spent in a tiny, backwoods village. It was characterized by poverty as my family ate wild meat killed by my family and friends, along with homegrown and canned vegetables.

Eating meat made us smarter. Indeed, it made us who we are, as a species. I do not doubt that vegans are the most clever among us, as I am reminded daily by the many vegans displeased with my diet. Yet the privilege of veganism came about, at least in part, because Homo sapiens developed the cognitive capacity for creating tools and civilization. I doubt I need to point out in this space the horrors that resulted from these tools and industrial civilization.

As I have pointed out a few dozen times, most recently here, I am not in the business of telling people what to do. As a result, I rarely tell people how to act, what to wear, and what to eat. In other words, I choose to act in a manner contrary to the many people who feel obligated to tell me what to do in each of these three cases (and others). In part, my reticence in telling other people what to do stems from my knowledge of our relative absence of free will.

I appreciate the rare attempt to improve life on Earth. However, there is no “silver bullet.” There is no single solution, nor even a combination of solutions, that will slow or stop the inevitable, abrupt overheating of our only home. As Edward Abbey pointed out decades ago, “it’s a fool’s life.” Our actions seem foolish in light of abrupt climate change, the Sixth Mass Extinction, and an indifferent cosmos. 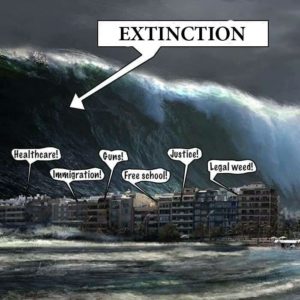