If my decomposing carcass helps nourish the roots of a juniper tree or the wings of a vulture — that is immortality enough for me. And as much as anyone deserves.

As I have explained repeatedly and recently, habitat on Earth is rapidly disappearing for Homo sapiens. In a perfect world, or at least as a perfect ending to an imperfect world, we would all be prepared to die.

The character Inigo Montoya gives his counterpart little time to prepare when he issues his warning. The Montoya character is played by Mandy Patinkin in The Princess Bride, one of my favorite movies (Twentieth Century Fox, 1987).

It has been suggested I modify Montoya’s warning: “My name is Guy McPherson. You have killed my planet. Prepare to die.” Although I appreciate the good humor, I rarely employ the suggestion to modify and broadcast this warning.

There are many ways to prepare for one’s own final, dream-free nap. Heavily invested in the infinite-growth paradigm, most of us ignore all of them. We rarely think about our legacy, much less the path by which we leave our legacy. By not thinking about what we leave behind, we fail to live with urgency today. Afflicted with the notion that we have years to live — even decades — we pay greater attention to our diets than to the end of our lives. The two are sometimes related. The relationship is tenuous in the midst of abrupt, irreversible climate change. The relationship is even more tenuous in the midst of the Sixth Mass Extinction on Earth. The workshop I developed with my partner several years ago provides a means of dealing with the intellectual and emotional response to death and extinction.

People frequently reveal to me their favorite activities. Considering the people with whom I spend most of my time, it is no surprise that among the most common of these activities is immersion in the natural world. These people are not misanthropic, although they realize the benefits of spending time outdoors, contemplating our place in the cosmos.

As with many of my friends and acquaintances, I like to spend time immersed in the solitude of nature. Forests, savannas, deserts, and beaches appeal to me, particularly when these ecosystems are lightly populated by humans.

Because many of my friends and acquaintances are willing to discuss topics deemed taboo by the majority of society, the issue of how we would like to spend our final hours occasionally arises. If we know when our personal death draws near, I recommend those activities that make an individual feel useful and alive. These two goals occasionally are contrary to each other, and therefore call for tradeoffs and compromises. For example, I love skydiving because it makes me feel alive. However, it does not make me feel useful. Promulgating evidence via teaching and writing make me feel useful, but it does not induce a state of ecstasy. On the other hand, hiking in a forest makes me feel alive and useful: Such activity promotes my continued good health while bringing me joy.

We usually do not know when our demise approaches. As a result, I encourage people to spend as much time as they are able on the activities they identify as being important as they near death. If you want to be hiking along the beach during your final sentient minutes, I encourage you to hike on the beach as often as you can. If your cause of death is correlated with your daily activities, then spending half your time on the beach suggests your chances of dying while hiking on the beach are about 50:50. If you would like to die in your sleep, perhaps you need to sleep a lot. If, on the other hand, you spend most of your waking hours pounding away at a keyboard for people who disparage you and your work, then you can expect to die at your keyboard. You might even be unhappy.

Perhaps there is a lesson here for me. Rather than pay attention to it, I will keep typing.

As regular followers of my work know, I have a penchant for ice cream. I recognize the attendant dangers, and many of you have noticed, too. As much as I appreciate your concern for my health, you need not point out the increased girth of my stomach. I clearly need to spend more time hiking in the nearby forest and less time pleasing my tastebuds while hacking away at my keyboard (usually the one on my phone). Again, tradeoffs come to mind.

For me, preparing to die means preparing to live. After all, death is a part of life. And what better way to prepare for our final exit than living fully today? 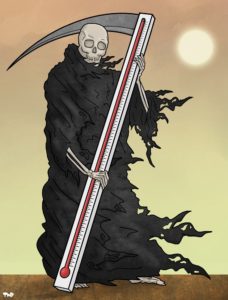