Technically, we are not headed into a recession, not even a brutal one. We are in the midst of the Greatest Depression. All this chatter about the coming recession from the corporate media is clearly intended as a distraction. The industrial economy never recovered from the Global Financial Crisis of 2008-2009. Nor will it, despite clever attempts to “paper over” financial challenges with a wide array of tricks rooted in monetary policy.

The Limits to Growth have arrived, as forecast in 1972. The notion that we can experience infinite growth on a finite planet is believed only by fools and economists (and I repeat myself).

The Federal Reserve and equivalent banking systems around the world work with the governments of the world to maintain the illusion of a healthy economy. This approach has the unaware masses in the United States believing all is well with the infinite-growth paradigm, although the industrial economy is quite obviously in poor condition. This system of lies, which the masses really want to believe, keeps the populace steadily grinding away on the Treadmill of MiseryTM so that the banksters can continue to enjoy their enormous privilege. George Carlin calls these latter people our owners.

To his credit, former Chair of the Federal Reserve Ben Bernanke admitted back in February of 2011 that nearly every bank in the country almost failed shortly after the price of oil peaked in mid-2008. This story has been critically under-reported during the last eight years. Also, Bernanke failed to mention that such an outcome surely would have terminated western civilization shortly thereafter. I once believed such an outcome would prove favorable for life on Earth. With my improved understanding of the aerosol masking effect, I now know better. This factor alone could contribute significantly to the near-term loss of all life on Earth resulting from a 5-6 C global-average rise in temperature. With respect to our knowledge of the industrial economy and abrupt climate change, I suspect most of us are still catching up to the people pulling the strings of empire, as I indicated recently in a peer-reviewed article.

At the root of our shared predicament lies the concept of ownership, as I mentioned a few years ago. I have no doubt that this concept will diminish greatly in importance as more important events unfold.

I do know a few relevant items. I know that loss of habitat, which is largely based on the rate of environmental change, will lead to the near-term demise of Homo sapiens. I am not a fan of the extinction of any species. I am similarly no fan of the ongoing Sixth Mass Extinction. However, I recognize the importance of habitat and also the importance of the rate of environmental change for the continued persistence of every species, including ours.

I will never be able to say, “I told you so.” This is hardly the worst of my troubles.

I suspect, although I cannot know with certainty, that significant stock-market corrections will occur this autumn in the United States and other countries. Such events are long overdue. Will they trigger a domino-like chain of events that lead to our demise? I believe the probability is high enough to have me living with increased urgency and also with increased sadness.

If not this year, then when? Soon, I would guess. Yet again I encourage readers to let go of what we cannot control: Let go, or be dragged.

It is time to be true to your authentic self, in a manner bolder than you have ever been. It is time to live as if you are dying. The day draws near.

Good luck to us all. We have never been in greater need of good fortune. 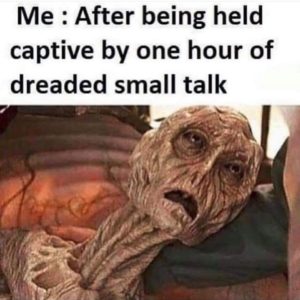