I write to entertain my friends and to exasperate our enemies … I write to make a difference … To honor life and to praise the divine beauty of the natural world.

I never met American author Edward Abbey. One of my prized possessions is an autographed copy of the The Fool’s Progress, the last of his books for which he witnessed publication. My brother met Abbey at a book-reading and -signing event and purchased the book for me.

I did not have an opportunity to meet Abbey because he died about six weeks before I commenced my tenure-track position as an Assistant Professor at the University of Arizona in Tucson, Arizona. I remain Professor Emeritus at the institution, after successfully pursuing promotions to Associate Professor (with tenure) and (Full) Professor at ages earlier than is customary.

Most regular readers of this blog know that I was influenced by the writings of Abbey from my days as a college student in northern Idaho. I was in my early twenties at that time, and I paid my way through college by chasing and suppressing wildfires during the summers between classes. Abbey was involved in the wildfire profession, too, in serving as a fire lookout on various public lands.

After stints in western Texas for graduate school, Georgia for postdoctoral research, and a Visiting Assistant Professor gig at Texas A&M University, I moved to Tucson, Abbey’s adopted city. I spent most of my career as a professor on the campus of the University of Arizona in Tucson.

I am an anarchist in no small part because of Cactus Ed’s lucid prose. Under the influence of Abbey, I implemented anarchism in my courses.

I have a friend in Doug Peacock, who was heavily affected by Abbey and also was influential to Abbey’s writing. Abbey and Peacock are the only two writers who compel me to put down their books in favor of taking a hike. This speaks volumes about their skill as provocateurs. Peacock echoes Abbey in calling for radical action. I continue to heed and promulgate calls to action.

Abbey wrote the following lines in Desert Solitaire: “As a confirmed melancholic, I can testify that the best and maybe only antidote for melancholia is action.” I agree, and the writings of Abbey and his predecessors inspire me to action. Abbey’s follow-on sentence has not yet afflicted me, although I dream of the day it will: “However, like most melancholics, I suffer also from sloth.”

Doug Peacock’s only son Colin is a former student and teacher of mine with whom I remain friends. Doug and Colin are the only father-and-son pair to have been interviewed for Nature Bats Last on the Progressive Radio Network.

A few biographies have been written about Abbey. I have read four of the seven biographies that I know about focused on Abbey. Perhaps there are more. I am not the bibliophile I once was.

A quick online search will turn up considerable information about Abbey. Some of it is probably accurate. I will not waste your time summarizing details about a man I never met. You can conduct that activity yourself. Rather, this essay focuses on the impact of Abbey’s writing on my personal and professional life (written in the singular because there is very little difference between my personal life and my professional life). I have covered some of this information in the hundreds of essays in this space, as well as in a few of the hundreds of video clips found here.

The first of Abbey’s books that I read was the sequel to his break-out book, Desert Solitaire (1968). The lesser-known book The Journey Home (1977) was foisted upon me by a college roommate. I read it quickly and soon turned to his other books, consuming them rather than studying for my courses in forestry.

Abbey’s legacy includes a mix of fiction and nonfiction. As he admitted, his books in the two genres were barely distinguishable from one another with respect to genre. His friends and his adventurous life informed his works of fiction. Most of his books were geographically focused in the southwestern United States where Abbey lived most of his life. As it turns out, I spent much of my adult life in the same geographic area.

I learned to camp and backpack as the middle of three children born to teachers inclined to spend time outdoors. I grew up in a small village in northern Idaho surrounded by wildness. Not wilderness, mind you: wildness. Most of the area around Weippe, Idaho was forested with large trees at the time. The behemoths are gone now, replaced by second-growth matchsticks. The environmental warnings of my parents echo in my brain.

My free-range childhood was misspent during the American cultural revolution, coincident with the period during which Abbey was writing Desert Solitaire, The Journey Home, and other books. Abbey’s writings were familiar in part because the time he was writing coincided with my experiences, and also because we both called ourselves westerners. As with my parents, Abbey was sounding the environmental claxon. Abbey was a lot funnier about it than my parents. He found humor in the tragedy that my parents largely left out of their descriptions of the horrors to come.

After reading each of Abbey’s books that I could get my hands on, I began reading the authors to which he referred in his written works: Henry David Thoreau (who I discovered in high school), Aldo Leopold (who I discovered coincidently with discovering Abbey), Wallace Stegner, A.B. Guthrie, Jr., Gary Snyder, and Lao Tzu. I still regularly read passages from the Tao Te Ching. I have three translations because Abbey recommended the book. Increasingly, I came to know the western United States not only through direct experiences, but also via literature. The writings of others served as a lens for my direct experiences. For example, I learned about Stegner’s “stickers” and “boomers” (those who stay vs. those who exploit, respectively, with a focus on the West). It was through these writings that I came to appreciate not only the big woods of my early years, but also the sweeping plains and the brittle desert that upon first inspection seem desolate and harsh, respectively.

In one of Abbey’s books, he describes a hike to the confluence of the Green and Colorado Rivers in southern Utah. His young daughter joined him for the hike. Abbey’s description was so compelling that when I reread it more than two decades ago I immediately began planning a trip by packing my 1983 Ford F-150 pickup truck. I subsequently set out on a camping adventure. I hiked to the confluence overlook and peered down several hundred feet. The waters of the reddish Colorado River and the greenish Green River mixed slowly, requiring nearly a half-mile before the waters became indistinguishable.

My lifelong affection for the West — uppercase W intended, to signify geography and attitude — never faded. As I wrote several months ago, I am most comfortable in this region. That I no longer call it home is consistent with my Buddhist-inspired sense of impermanence regarding all structures and experiences.

I continue to write and speak for many of the same reasons Abbey did. “I write to entertain my friends and to exasperate our enemies,” and I am fortunate that Abbey and I have shared friends and also shared enemies. “I write to make a difference,” if only to a few people. I write “to honor life and to praise the divine beauty of the natural world.” These goals are inherently consistent: Honoring life and praising the beauty of the natural world are part and parcel of my teachings, which of course are intended to make a difference. 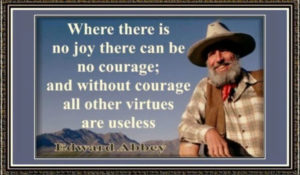