September 7, 2019
When the Earl of Sandwich died they buried him in between two other guys
~ David Corrado

The title is not a typographical error. I do not mean, “awake,” although the thought entered my mind.

My partner went to a wake a few days ago. A friend of her daughter, a woman in her early twenties, died tragically young from unrevealed causes.

Because of my interest in words and their use, I wondered why a wake is called a wake. After all, ample evidence indicates death is a one-way street not followed by awakening.

The etymology of wake indicates the correspondence between the post-life event and the “trail” behind a fast-moving boat. The wake is what follows. The wake in question here follows life. The wake on the lake “follows” the boat.

What about awakening, which is where my mind initially and incorrectly turned? In this case, I am thinking of the Merriam-Webster definition, “a coming into awareness.”

One of my goals as a teacher is to make people aware (i.e., to bring them into a state of awareness, or a state of being knowledgeable). This is hardly my only goal, nor that of higher education in general, as I have pointed out in this space:

What is higher learning? My favorite definition was provided by Thomas Angelo in a 1993 issue of the bulletin of the American Association of Higher Education: “Higher learning is an active, interactive, self-aware process that results in meaningful, long-lasting changes in knowledge, understanding, skills, behaviors, attitudes, beliefs, opinions and/or values — that can not be attributed primarily to maturation.” This seems a reasonable definition for all education, instead of simply the “higher” variety.

I suspect most people reading these words will not have an opportunity for any kind of post-death memorial service, including a wake. The collapse of industrial civilization is at hand, and such an event will be followed by few opportunities to celebrate anybody’s life (or death).

How do we live in light of the terminal diagnosis we have received? I have written about this topic frequently and recently. To summarize, no superheroes will rescue us from this impending disaster. However, each of us can be a real-time superhero in our communities by creating awareness. We can set an example for others by telling the full, unvarnished truth. In so doing, you might have time for a wake. As I have discovered, not everyone welcomes the full truth. 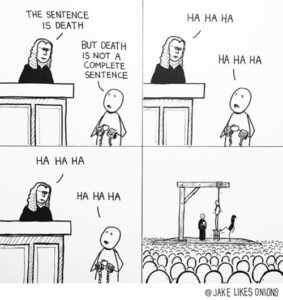