I always wanted to be somebody, but now I realize I should have been more specific

I have been pointing out the existential crises we face for more than a dozen years in this space. As I have indicated, essentially alone, the rate of environmental change is far more important than the magnitude of change. Chattering about the latter is exactly the kind of distraction I have come to expect from media, governments, and paid climate scientists, on the rare occasion they bother to mention climate change as a worthy topic.

I belatedly realized that most people cannot distinguish evidence from opinion. Indeed, the masses continue to confuse acts of thoughtful intelligence with symptoms of mental illness.

I have acted on the information I have presented in many ways, including attempts to lead by example. Most of my relevant actions have led to personally devastating outcomes, with few positive impacts on the lives of others. This audaciously evidentiary approach has been met, for the most part, with cynicism and indifference. My efforts to teach others nonetheless continue, accompanied by my own lack of attachment to the outcome.

Recently I have greatly shortened my message, albeit with relevant links for those few people who desire additional, supporting information. In addition, I briefly pointed out the lethal link between the decline of the industrial economy and abrupt climate change. These attempts came after I periodically updated a massive body of evidence, then provided a likely overview of our future, and ultimately started fresh with another periodically updated essay. After all that, with the primary responses to my voluntary work being plagiarism, betrayal, and defamation, I started from scratch by pointing out the various means by which we can lose habitat for humans in the near future. I created dozens of video versions of my message along the way. The latest comprehensive version of these video clips is embedded here. Yesterday, I posted a 162-second video that covered relevant material. I continue to publish in the peer-reviewed literature, including papers pointing to our near-term demise published in May of 2019 and September of 2019, respectively.

As pointed out by my friend and radio-show cohost Kevin Hester, the situation can only be worse than we know. Barring a series of miracles, nothing can be better than we know.

Through all this writing and speaking, I have presented evidence while focusing on the likely impacts on our individual lives. In other words, I have attempted to use evidence as a springboard for pursuing a life worth living. This is the approach I used for more than two decades in university classrooms and also as I mentored graduate students.

Lest we lose track of what really matters, my primary goals are to encourage the pursuits of living with dignity and integrity. So, too, is completing our lives with these same characteristics. Expressed another way, the pursuits of excellence and love remain primary to the notion of a life lived well.

We are all going to die, even those who believe they are “fighting“ — whatever that means — abrupt, irreversible climate change. Indeed, we are all going to die rather soon, contrary to my wishes and myriad hopes and prayers from the masses. The question remains: How shall we live in light of this knowledge?

With some assistance, I have suggested planetary hospice as a way forward, complete with radical honesty. I have set an example and made significant personal sacrifices in promulgating a message rooted in honesty, integrity, and love.

The deafening response? Crickets. Apparently few want to know what is happening on Earth. Even fewer are interested in contemplating personal changes in response to evidence.

How much more palatable can I make this message? How can I facilitate the swallowing of the worst possible news, with dignity? How do we retain integrity in the face of a terminal diagnosis?

Beyond this short essay, I will try yet again soon in this space. My next trick: two short video clips. How short? The length of customary television commercials, 60 seconds and 30 seconds, respectively. I am willing to pander to the rapidly diminishing attention span of the masses to positively change a single life. If I had the money, I would pay to have the commercials broadcast on television every night. Perhaps somebody reading this essay will pursue that approach.

Between now and the release of these video clips, I conclude this short essay with words I have used previously:

In light of the short time remaining in your life, and my own, I recommend all of the above, louder than before. More fully than you can imagine. To the limits of this restrictive culture, and beyond.

Live large. Be you, and bolder than you’ve ever been. Live as though you’re dying. The day draws near. 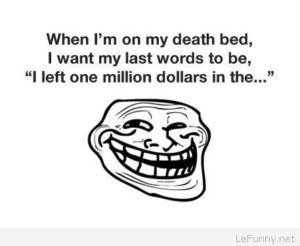