Am I a Nihilist?

October 26, 2019
Science, its imperfections notwithstanding, is the sword in the stone that humanity finally pulled. The question it poses, of universal and orderly materialism, is the most important that can be asked in philosophy and religion.
~ Edward O. Wilson

I am occasionally accused of being a nihilist, as I have written previously. According to the Miriam-Webster online dictionary, there are several definitions of nihilism:

1a: a viewpoint that traditional values and beliefs are unfounded and that existence is senseless and useless

1b: a doctrine that denies any objective ground of truth and especially of moral truths

2a: a doctrine or belief that conditions in the social organization are so bad as to make destruction desirable for its own sake independent of any constructive program or possibility

2b, capitalized: the program of a 19th century Russian party advocating revolutionary reform and using terrorism and assassination

I have never suggested “that existence is senseless and useless.” Quite to the contrary, I frequently quote Ralph Waldo Emerson in pointing out that usefulness — more than happiness, for example — is a cornerstone for a meaningful human life. We have only the meanings we give our lives, as opposed to external meanings via religion or culture.

Nihilism is “a doctrine that denies any objective ground of truth and especially of moral truths.” Science, on the other hand, is a way of knowing rooted in rationalism. As such, science specifically adheres to the idea that knowledge can be discovered and understood. This knowledge is rooted in facts, hence truth (please notice the lowercase “t”). As Edward O. Wilson points out in his fine 1998 book, Consilience, morals must derive from science.

Nihilism is “a doctrine or belief that conditions in the social organization are so bad as to make destruction desirable for its own sake independent of any constructive program or possibility.” Whereas I have frequently pointed out the horrors of civilization (cf capitalism), I have never suggested chaos in response. As an anarchist, I have occasionally suggested anarchism as a response, albeit recognizing that it is too late for any re-arrangement of social organization to surmount human extinction in the near term. In other words, my social criticism suggests paths we could have taken, long ago, to avert disaster. I have also focused on how individuals can live today to the betterment of our lives and the lives of others.

Finally, nihilism is “the program of a 19th century Russian party advocating revolutionary reform and using terrorism and assassination.” Need I point out that I was not alive in the 19th century, and that I have never lived in Russia? For clarity, I was not alive during the 19th century, and I have neither lived in Russia nor have I advocated “revolutionary reform and using terrorism and assassination.”

Thus am I forced to conclude that I am not a nihilist, based on any definition of the word, despite the number of vociferous accusations tossed my way. Facts and proper use of language notwithstanding, I am certain only that evidence-free attacks on my character will continue indefinitely. 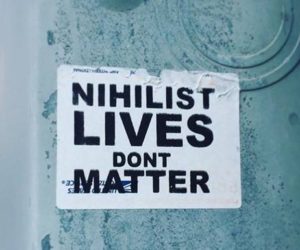