October 7, 2019
It was, of course a lie what you read about my religious convictions, a lie which is being systematically repeated. I do not believe in a personal god and I have never denied this but have expressed it clearly. If something is in me which can be called religious then it is the unbounded admiration for the structure of the world so far as our science can reveal it.
~ Albert Einstein

Peer-reviewed journals have published more than two dozen papers since 1929 about the aerosol masking effect (aka global dimming). I have frequently referred to these papers as I have become aware of them. Doing so has attracted adverse attention toward me from organizations claiming to be committed to retaining life on Earth, such as the serial liars at Wrong Kind of Green, Extinction Rebellion, and Deep (sic) Green (sic) Resistance (sic). The latest attacks from such organizations cite the abstract of a paper published in the September 2019 issue of Nature by Shindell and Smith. The short essay you are now reading points out the facts, including quotes from the body of their article (not holding the copyright precludes including the entire paper by Shindell and Smith).

Because I am Professor Emeritus at a major research university, I have access to the full article in question. Because I have integrity, I will quote the article, in context. Because the organizations and individuals attacking me have little or no integrity, they refuse to give up $8.99 or the time required to locate and study the article in a nearby library. The abstract of the 2019 paper by Shindell and Smith is copied directly below, although I have removed superscripted numbers indicating cited work throughout this essay (Nature, “Climate and air-quality benefits of a realistic phase-out of fossil fuels,” volume 573, pages 408–411).

Abstract. The combustion of fossil fuels produces emissions of the long-lived greenhouse gas carbon dioxide and of short-lived pollutants, including sulfur dioxide, that contribute to the formation of atmospheric aerosols. Atmospheric aerosols can cool the climate, masking some of the warming effect that results from the emission of greenhouse gases. However, aerosol particulates are highly toxic when inhaled, leading to millions of premature deaths per year. The phasing out of unabated fossil-fuel combustion will therefore provide health benefits, but will also reduce the extent to which the warming induced by greenhouse gases is masked by aerosols. Because aerosol levels respond much more rapidly to changes in emissions relative to carbon dioxide, large near-term increases in the magnitude and rate of climate warming are predicted in many idealized studies that typically assume an instantaneous removal of all anthropogenic or fossil-fuel-related emissions. Here we show that more realistic modelling scenarios do not produce a substantial near-term increase in either the magnitude or the rate of warming, and in fact can lead to a decrease in warming rates within two decades of the start of the fossil-fuel phase-out. Accounting for the time required to transform power generation, industry and transportation leads to gradually increasing and largely offsetting climate impacts of carbon dioxide and sulfur dioxide, with the rate of warming further slowed by reductions in fossil-methane emissions. Our results indicate that even the most aggressive plausible transition to a clean-energy society provides benefits for climate change mitigation and air quality at essentially all decadal to centennial timescales.

Particularly noteworthy in this paper is lack of any mention of other recent peer-reviewed papers on the topic of the aerosol masking effect. These include the papers I commonly mention by Hansen and colleagues (2011), Levy and colleagues (2013), and Rosenfeld and colleagues (2019). These latter three papers follow a general pattern in published scholarly work demonstrating the increasingly dire nature of the predicament we face, becoming less conservative with each published paper. For example, the 2011 paper by Hansen and colleagues very similarly matches the conclusion reached by Ångström in 1929 (Geografiska Annaler, “On the Atmospheric Transmission of Sun Radiation and on Dust in the Air,” volume 11, pages 156-166): Complete cessation of industrial activity will cause a near-term planetary warming of 1.2 + 0.2 C. The subsequent paper by Levy and colleagues concludes that as little as a 35% reduction in industrial activity will contribute to near-term planetary warming of 1 C. Although the paper by Rosenfeld and colleagues is ambiguous with respect to planetary warming beyond that forecast by Levy et al., an interview with the lead author of the paper indicates that the paper by Levy and colleagues underestimates by half the impact of the aerosol masking effect (thus, less than a 20% reduction in industrial activity will drive a rapid temperature spike of 1 C). As I have indicated previously and repeatedly in this space, the rate of environmental change is tremendously important with respect to the ability of any species to adapt to the change. The timing of rapid heating is also critically important.

How quickly will Earth warm as aerosols fall from the atmosphere? A video recorded about a year after the 2011 paper was published and subsequently released on 5 January 2013 has James Hansen clearly stating that the aerosols fall out of the atmosphere within five days (unfortunately, I can no longer find the video, and I believe it has been removed from YouTube). The general consensus among other climate scientists seems to be about six weeks, although citations are conspicuously absent from the literature. Whether the reduction of aerosols drives planetary warming in five days or six weeks is largely irrelevant, as few species are able to adapt to such a large environmental change within several years, much less a few days or weeks.

The text of the paper by Shindell and Smith indicates ignorance of the current global-average temperature. Specifically, they state:

The scientific community has long known that–owing to the shorter lifetime (days to weeks) of cooling aerosols relative to long-lived greenhouse gases such as carbon dioxide (CO2, decades to centuries)–a cessation of emissions would lead to a near-term pulse of warming. This was illustrated most clearly by the Intergovernmental Panel on Climate Change (IPCC) in the Frequently Asked Questions to the Working Group I contribution to the Fifth Assessment Report (AR5)14, in which it was stated that ceasing anthropogenic emissions would lead to a spike in warming of about 0.5 °C within a few years, followed by a slow cooling that would require nearly a century to recover to current temperatures. Many studies over the past two decades have reported a similar near-term warming due to the removal of anthropogenic aerosols when all aerosol or all anthropogenic emissions cease.

This perception has led to contentious debates in the policy arena, for example during the approval process for the Summary for Policy Makers of the IPCC Special Report on 1.5 °C (hereafter SR1.5), about the role of reductions in non-CO2 emissions. Specifically, some countries with high air-pollution burdens pushed for an equal emphasis on the near-term acceleration of warming that would result if they were to shift away from fossil fuels, alongside the Report’s presentation of the benefits to public health.

As I have pointed out repeatedly, the global-average temperature of Earth was 1.73 C above the 1750 baseline in April of 2018. Even then, Earth was the warmest it has ever been with Homo sapiens present.

Another problem associated with the recent paper by Shindell and Smith is their assumption of a gradual decline in industrial activity. They seem to believe humans will control the pathway of descent:

We included 42 pathways that are classified by the SR1.5 as being consistent with a global temperature rise limited to 1.5 °C above pre-industrial levels, with no or limited (less than 0.1 °C) temporary overshoot of the target (see Methods). These scenarios are least-cost pathways generated by models of the energy–economy–land system. They include a rapid phase-out of unabated fossil-fuel usage, with a median decrease of around 60% by 2050 and 85% by 2100 for all primary energy, and a reduction of greater than 90% in the use of fossil fuels for electricity generation by 2050.

These results differ greatly from the idealized picture of a near-instantaneous response to the removal of aerosol cooling followed by a slow transition to dominance by the effects of CO2. In these more plausible cases, the temperature effects of the reduction in CO2, SO2 and CH4 roughly balance one another until about 2035.

We next sought to explain the difference in our results in comparison with the perception of a climate penalty due to the rapid removal of aerosol cooling. In large part, the difference between the response times of aerosols and CO2 is smoothed out when both emissions are reduced gradually, compared with idealized zero-emissions simulations.

A far more likely scenario, following the logic of Rosenfeld and colleagues (2019), has a relatively rapid and unplanned decline in industrial activity occurring over a period of weeks or months. Indeed, a later portion of the Shindell and Smith paper seems to contradict the lines above while agreeing with my oft-repeated statements: “A climate penalty could occur if air-pollution controls were to be put in place while greenhouse-gas emissions were allowed to continue to increase, as many studies have shown.”

Finally, a huge red flag appears when Shindell and Smith discuss the importance of methane as a greenhouse gas:

More generally, it is difficult to compare our results with those from GCMs (General Circulation Models) because the latter have not yet explored in detail the effects of 1.5 °C scenarios relative to baseline emissions. The closest analogue from a GCM is the results using the GISS-E2R climate model, which examines a faster phase-out of fossil-fuel usage to achieve 1.5 °C rather than 2°C. Those found that negative radiative forcing due to reduced CO2and reduced ozone (owing to decreases in emissions of precursors such as nitrogen oxides (NOx) and carbon monoxide (CO)) largely offset positive forcing due to reductions in cooling aerosols and a slight increase in methane, so that net forcing was less than 0.03 W m−2 until 2060 in their simulations. Those results differ regarding the impact of methane–it caused warming in those scenarios, whereas it led to cooling in the scenarios examined here–because the 2 °C reference scenario used in that study already incorporated all the methane reductions included in the 1.5 °C scenarios, hence the only additional impact was a small chemical response in which the lifetime of methane increased owing to reductions in NOx emissions. The overall finding of a minimal climate penalty in those GCM simulations seems to be qualitatively consistent with the results from the simple climate model (FaIR) used in this work.

Wait, what? The “impact of methane–it caused warming in those scenarios, whereas it led to cooling in the scenarios examined here …” Atmospheric methane caused Earth to cool in the scenarios used by Shindell and Smith? Were that the case, many of the issues associated with abrupt climate change would be solved quickly. For example, we could unleash more livestock and also more natural gas to cool the planet. Unfortunately, methane is a powerful greenhouse gas that warms, not cools, the planet.

Based on the many errors resulting from poor scholarship in the paper by Shindell and Smith, I am forced to conclude that my earlier analyses focused on the aerosol masking effect are correct (including my latest peer-reviewed contribution). Atmospheric aerosols contribute to powerful negative forcing (i.e., cooling). It seems we will need to beat the proverbial devil to overcome the predicament in which we find ourselves.

*Thanks to Jackson Davis, who conducted voluntary research for this essay. Most notably, Jackson tracked down and sent to me the citation for the 1929 paper by Ångström. 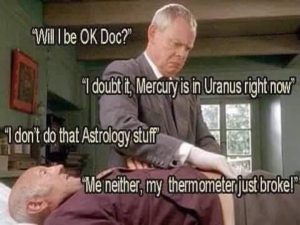