December 13, 2019
Nothing will remain on earth, or under the earth or in the waters which will not be persecuted, disturbed and spoiled, and those of one country removed into another. And their bodies will become the sepulture and means of transit of all they have killed.
~ Leonardo da Vinci

Earth is also in the midst of a Mass Extinction Event. This event does not lie in the distant future. It is not beginning. Rather, it is ongoing. It has been under way for many years. Consider the “Significance” section of a 2017 peer-reviewed paper:

The strong focus on species extinctions, a critical aspect of the contemporary pulse of biological extinction, leads to a common misimpression that Earth’s biota is not immediately threatened, just slowly entering an episode of major biodiversity loss. This view overlooks the current trends of population declines and extinctions. Using a sample of 27,600 terrestrial vertebrate species, and a more detailed analysis of 177 mammal species, we show the extremely high degree of population decay in vertebrates, even in common “species of low concern.” Dwindling population sizes and range shrinkages amount to a massive anthropogenic erosion of biodiversity and of the ecosystem services essential to civilization. This “biological annihilation” underlines the seriousness for humanity of Earth’s ongoing sixth mass extinction event.

Abundant evidence indicates humans will join the annihilation of “all life on earth,” as reported in the peer-reviewed literature on 13 November 2018. This paper includes the following explanatory line, which has obvious implications for Homo sapiens: “In a simplified view, the idea of co-extinction reduces to the obvious conclusion that a consumer cannot survive without its resources.”

Earth is currently at its highest global-average temperature with Homo sapiens present. Short of stripping away the atmosphere, which is not a good idea, there is no known means to stabilize or cool the temperature of Earth. There are, however, several means by which the planet can be quickly, additionally overheated.

The projected rate of climate change based on IPCC-style gradualism outstrips the adaptive response of vertebrates by a factor of 10,000 times. Furthermore, mammals cannot evolve fast enough to escape the current extinction crisis. That humans are vertebrate mammals leads me to believe the ongoing Mass Extinction Event will soon cause the extinction of Homo sapiens due to loss of habitat for our species. I would love to be convinced otherwise.

Longer versions of the message presented in this essay, replete with links to additional evidence, can be found throughout this blog. My often-updated essay, “Extinction Foretold, Extinction Ignored” is a fine place to start. In addition, a brief explanation of the McPherson Paradox can be read here. 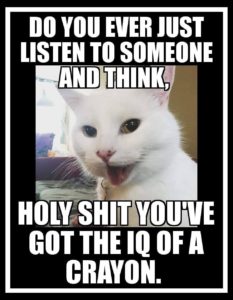