December 19, 2019
Hope and fear are both phantoms that arise from thinking of the self. When we don’t see the self as self, what do we have to fear?
~ Lao-Tzu

Most of us have grieved, and this essay neither downplays nor criticizes the importance of the process of grieving. However, there are positive paths forward. As part of my role as a teacher, I will continue to point out these paths when they appear to be helpful for individuals afflicted with grief.

I read nearly every day a story about the grief experienced by scientists, especially scientists who work on climate change. Mixed in with these reports are articles that describe scientists who are afraid. I don’t know whether to laugh or cry. I could mock them, I suppose, were such behavior as much a part of my character as it is for many of these scientists.

These same scientists, along with like-minded “journalists” and “activists” who have not done half the work I have done in bringing attention to evidence about abrupt climate change and its likely outcome for humans, have been defaming me for more than a dozen years. They simultaneously conduct the nearly impossible trick of plagiarizing me and defaming me. The defamation comes in the form of slander and libel, and often includes efforts to mock me. It continues, without supporting evidence, every day.

To what end? Apparently, to point out that (1) I am an extremist, and therefore (2) the offending party is not an extremist. These fine people clearly have not noticed that I am using the evidence they produced to reach my conclusions. They ride my coattails all the way to the bank, making money off the evidence I have compiled while incorrectly claiming that I have something to gain from promulgating the same evidence. It is an effective strategy largely because most Americans, and probably most other people, cannot distinguish fact from opinion.

As an aside, professional journalists do not mock or defame their interviewees. This is how we can distinguish professional journalists from people such as Dennis Bernstein, Thom Hartmann, Dahr Jamail, Alex Smith, and David Wallace-Wells. As an additional aside, activists take action. They do not seek public attention by spewing nonsense on a public stage while shaming and blaming other people for not taking action. As a third aside, activism assumes many forms, including raising awareness about issues.

Back to the primary point of this essay: scientists who grieve, and those who exhibit fear. The process of science, when conducted properly, minimizes or eliminates human emotions. This does not mean that scientists do not experience emotions. It means only that these emotions do not interfere with the collection, analysis, and interpretation of evidence. A depressed scientist reaches conclusions that are no different from a joyful scientist. Similarly, a scientist afraid of the future reaches conclusions that do not differ from those of a carefree scientist.

Scientists are no different from other people in their desire to be noticed and congratulated. Nearly all people seek validation for the actions they conduct. As a result, scientists seeking positive attention for grieving comes as no surprise. The majority of the public has no clue that the process of science is essentially emotion-free, and this ignorance allows many scientists to receive positive attention for wailing publicly about their grief. The guillotine feels no grief at the end of a day’s work.

My favorite definition of grief comes from the Grief Recovery Institute: wishing for a different past. Had scientists been pointing out the full evidence throughout their careers, they would feel no remorse about their contemporary actions. Had they lived as if climate represented a serious existential threat during the last century, then their personal actions would have left little or no room to rue the past.

For the remainder of this short essay, I will put aside the issue of science conducted properly. Instead, I will focus on actions any grief-stricken or fear-filled scientist could have taken instead of defaming me. I suspect these actions would have led to a positive outcome, relative to their new-found grief or fear, for many scientists (and for me).

First and foremost, scientists could have seriously considered the evidence I was collating, organizing, and promulgating. It was, and still is, evidence they published. I have been merely locating and presenting the evidence uncovered by other individuals, and then properly crediting those individuals. I learned how to do this work in graduate school. Most of the papers I quote are written by people who are teaching and mentoring graduate students. That these authors are teachers and mentors is as terrifying a thought as the blind literally leading the blind off a cliff.

Secondly, as a minor consideration, scientists need not live in fear. The same goes for all of us. Although I recognize and have frequently pointed out in this space that this entire society is based on fear rather than love, scientists could rise above their reactionary response (and so could the rest of us). They could set aside their personal emotions during their daily lives, in much the way science asks them to do while they are conducting scientific activities. Scientists are agnostic with respect to religion while conducting science. So, too, could their beliefs carry over to their daily lives, even when their daily lives are threatened by abrupt, irreversible climate change.

Finally, a point so minor it is nearly insignificant in light of the above two points: The grieving scientists could have participated in the Only Love Remains workshop created by my partner and me more than five years ago. As discussed in my latest peer-reviewed paper, this workshop recognizes that recovery from grief is possible, and such recovery allows formerly grief-stricken individuals to escape the monetary trap of grieving while proceeding to live fully.

In summary, grief and fear are normal reactions to loss (and potential loss). There are paths to recovery from grief and fear. Pursuing such paths seems much more reasonable than betrayal, defamation, and plagiarism. True professionals take note. 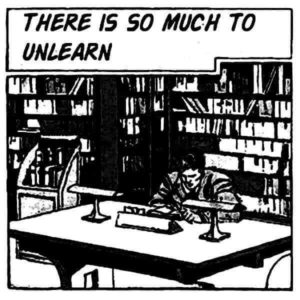