The Role of a Teacher

February 13, 2020
Talk sense to a fool and he calls you foolish
~ Euripides

I feel nature slipping out of my grasp as we rush to destroy every species on Earth. With no solutions to the predicament known as abrupt climate change, much less the ongoing Mass Extinction Event, my mind wanders between sadness and madness, between reality and the sorrow it brings. Is it possible for a scientist to die from a broken heart?

Therein lies the dilemma I face. Perhaps you face it, too. I know nary another scientist who actually understands and takes meaningful action on any of the following primary issues, much less all of them: human-population overshoot, destruction of non-industrial cultures, extinction of non-human species, global peak oil, and global climate change. I know plenty of scientists who teach at the edges of some of these topics, but I do not know others who understand and act on them.

In the latter years of my 20-year stint on campus at the University of Arizona, I was doing the best and most important work of my life. Excluded from teaching in my home department, I taught within a program called Poetry Inside/Out. “Inside” included the men’s pods of the county jail and the girl’s pods of the county juvenile detention facility; “Out” included an alternative, vocational high school and my college honors course. The Dean of the Honors College believed in the importance of a liberal education.

We asked each honors student to pay a visit to the juvenile detention facility. You would be hard-pressed to come up with similar-aged people in this country who had more disparate backgrounds than upper-middle-class, Caucasian honors students on the one hand and poor, Latina detainees on the other. The typical detainee is a 15-year-old Hispanic substance abuser who has been subjected to every conceivable kind of abuse, most recently sexual abuse by her mother’s current boyfriend. She has been knifed and shot at, and she has had a friend die in her arms. Nearly all these events, of course, stemmed from factors largely beyond her control.

After an honors student’s first visit to detention, we would ask a single question: “What do you think?” After a minute of reflection, the answer was nearly unanimous among the dozens of honors students: “They’re just like me.”

Finally, my teaching was inclusive and it led to real learning: Empathy is the most important thing we can learn. I would like to think we were — collectively and individually — living this idea from Eugene V. Debs, five-time Socialist Party candidate for president of the U.S.: “While there is a lower class I am in it, while there is a criminal element I am of it; while there is a soul in prison, I am not free.” Debs knew that rights are not given, they are fought for. As with Thomas Jefferson, Debs knew our rights had to be earned with frequent battles, or they would slip away. As with Jefferson, Debs knew some people must be willing to die to secure other peoples’ rights.

I recognized my accountability within a system gone awry. Even though I was doing exceptional work, and doing it well, I was participating in a morally bankrupt system. The low-hanging fruit of American Empire fully within my grasp, I voluntarily walked away.

I walked away from campus and the wonderful life it gave me. I did not walk away from teaching. As I have been pointing out for many years, I am a teacher. Teaching is not what I do. Rather, a teacher is who I am.

Mere decades ago, teaching was viewed as a noble pursuit. Even today, in many places, teachers are revered for their selfless work. Teachers demonstrate their commitment to education and to people willing to learn on a daily basis, typically earning a modest salary in return. In my case, I left behind the modest salary nearly 11 years ago.

As attentive readers know by now, I am a lifelong educator. In fact, the most common insult hurled my way by anonymous online commentators is “lifelong academic.”

I am profoundly committed to a life of service, a commitment I attribute to my virtual absence of free will. For me, a life lived otherwise is not worth living, even knowing that service is a trap.

During my early days on campus, I took a typically conservative approach to teaching. For example, I taught my dog to whistle. Even though I taught, and taught, and taught, my dog never did learn to whistle, which showed me something important: Even earnest, caring teaching does not necessarily lead to learning. The Sage-on-the-Stage approach is dead. So, too, is the model of student as customer. So I switched my approach to one based on a “Corps of Discovery” in which every participant is expected to contribute to the learning of every other participant. We practiced anarchism, in our own classroom-centered way, taking responsibility for ourselves and our neighbors. This radical approach to teaching puts it all on the line: Everything I know, and everything I am, is exposed during every meeting of every class. How can we evaluate our knowledge, our wisdom, and own personal growth without exposing our assumptions at every turn? This, of course, requires us to let go: to let go of our hubris, and replace it with humility. To let go of our egos, and instead seek compassion and perhaps even empathy.

As regular readers of this space know, I no longer think we will save the remaining shards of the living planet beyond a few more years. We will destroy every — or nearly every — species on Earth when the self-reinforcing feedback loops associated with climate change come more seriously into play. When I first wrote these words in 2012, they probably seemed absurd. A few years later, an article published in the 13 November 2018 issue of Science Reports concluded that a global-average temperature increase of a 5 to 6 degrees C will destroy all life on Earth. The paper’s title: “Co-extinctions annihilate planetary life during extreme environmental change.”

Vindicated at last, I am not even remotely pleased. I never wanted to witness, much less be part of, a Mass Extinction Event.

In light of the knowledge regarding our imminent exit from the planetary stage, I will keep attempting to move seemingly immovable individuals beyond their comfort points. I will inject empathy, therefore resistance, into a sociopathic culture largely devoid of people willing to stand in opposition to the mainstream. I will continue my efforts to move individuals beyond dark thoughts and into the light of a new world, however brief. I will encourage moving beyond inaction. How does that approach look today?

For me, actions have changed over time. When I recognized civilization as an omnicidal heat engine driving the ongoing Mass Extinction Event, I opted out of civilization. Doing so was the greatest mistake of my life (so far). Further study demonstrated the magnitude of the aerosol masking effect, which indicates that slowing or stopping civilization accelerates the extinction of humans and other organisms on Earth. In light of my accumulated knowledge, I returned my focus to the educational arena.

I spend most of my time promulgating evidence rooted in the peer-reviewed literature. This information leads me to ask questions, many of which are borrowed from the ancients. For example, more than two millennia into western civilization and the six questions of Socrates, I continue to pose the questions for which he became famous, and for which he was killed: (1) What is good? (2) What is piety? (3) What is virtue? (4) What is courage? (5) What is moderation? (6) What is justice?

I ponder and propose other questions, too, generally focused on how we live. Do we have an obligation to alleviate suffering? Does that obligation extend to our individual selves, as well as to other humans? Does it extend to non-human species? How shall we live? How shall I live? What is right action?

I try to remain detached from the outcome of my actions. Fortunately, I am improving in the latter pursuit. After all, my lifelong actions have neither slowed nor stopped abrupt, irreversible climate change. My actions have neither slowed nor stopped the ongoing Mass Extinction Event. At this late date in the human experience, I am learning to let go.

As an educator, my role is to facilitate learning. The role of a prized educator typically extends beyond technical knowledge and into the realm of values. After all, as I pointed out in quoting Thomas Angelo nearly nine years ago in this space, “Higher learning is an active, interactive, self-aware process that results in meaningful, long-lasting changes in knowledge, understanding, skills, behaviors, attitudes, beliefs, opinions and/or values — that can not be attributed primarily to maturation.”

My actions as an educator extend beyond the essays and videos that appear in this space to the interviews posted here and the monthly radio show I founded in 2014. In addition, I facilitate learning and introspection via the Only Love Remains workshop that is being offered more than a dozen times in 2020. 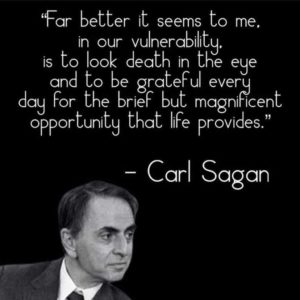