May 19, 2020
I’m losing the precious days. I am degenerating into a machine for making money. I am learning nothing in this trivial world of men. I must break away and get out into the mountains to learn the news.
~ John Muir

In December, 2018 I penned two posts about linguistics. Both were intended for entertainment. Both succeeded: I was entertained. The first is here. The second, posted four days later, is here. Perhaps this time you, too, will be entertained.

You can lead a man to knowledge, but you can’t make him think.

A little learning is a dangerous thing. This explains why some people avoid learning anything at all.

Curiosity killed the cat, as most people know. This explains why most people avoid intellectual curiosity like the proverbial plague.

I wonder: What was the best thing before sliced bread?

There’s method to my madness. There is also a madness to my method.

You can’t have your cake and eat it too? Never mind, then. Keep the cake to yourself.

A diamond is forever. But you’re not, so there’s no need collecting diamonds.

For every thing there is a season. Apparently the defamation season is the longest of them all.

Getting offered a penny for your thoughts indicates unimpressive thinking.

Remember when “go to pot” was a bad outcome?

Don’t throw the baby out with the bathwater! In whose home does this need to be said?

You’re the cat’s pajamas. This is supposed to be a compliment?

Truth is stranger than fiction. And less likely to be believed.

I’m guessing the ability to bring home the bacon is not particularly revered in the homes of vegans.

Weasel words are unimpressive, except to weasels.

Being born with a silver spoon in one’s mouth sounds like more trouble than it’s worth.

Why does bread always fall butter side down? Does the outcome change if both sides are buttered?

If you’re reading while on methamphetamines, does that make you a speed reader?

He went off half-cocked. She was even more disappointed than he was.

The novel coronavirus has mutated into an IQ test.

You can’t get blood out of a stone. Or a turnip. Try mammals, instead.

A rerun from an earlier post: Self-reinforcing feedback loops are like a stray dog in the street. We were all looking the other way and then, “Bam“ we ran over the dog. As with the feedback loops, we didn’t even know about the dog until it was behind us, dead in the road. 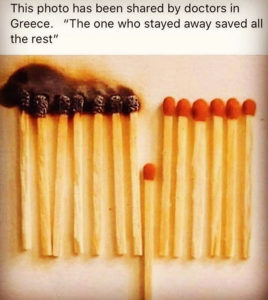 Mugs, tote bags, iPhone cases, tee shirts, and other pragmatic goods affiliated with the latter book are available on Redbubble). We do not earn money from these items. Indeed, they have returned far less money than it cost to create and distribute them. I list them at the bottom of posts in this space in support of my artistically inclined partner, who created them.