I sent the following message to Cory Morningstar via email on Sunday morning, 30 August 2020. I have received no response, perhaps because Ms. Morningstar has blocked email messages from me. As a result, I would appreciate you sending her this message on my behalf, including the graphic. I prefer to communicate with Morningstar over others in a long list of defamatory humans because she seems to be the brightest among a dim bunch.

If you choose to contact Cory and do her this favor, please find her email address or send her a message via social media. Thank you, in advance. 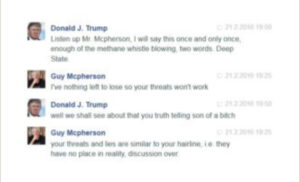 More than three years have passed since your defamation campaign began. I’ve not forgotten, in part because the campaign could have ended with the murder of my partner and me. It led to the dissolution of many relationships in my life, not that you care.

Remember when you were a legitimate researcher? When did you start believing Deep State operatives and their constructed stories? When did you ever believe nonsense that cannot be confirmed from crazy women seeking attention? Was it when someone toyed with your emotions?

Your conclusions are wrong, which I doubt you’ll ever admit. Your actions are horrible. You have contributed to an ignorant populace by having me removed from public service.

All I’ve ever sought is a public apology from you defamatory assholes. The same applies now, despite the exorbitant legal fees I’ve paid. Get your passel of liars to admit your lies, and I’ll let this go.

You can try to make this right. You can tell the truth. You can seek a clear conscience before you die. I doubt you will, but it’s an option.

I’ve copied an attorney and my partner. I do not expect a response, because you have doubtless come to believe the lies you tell.